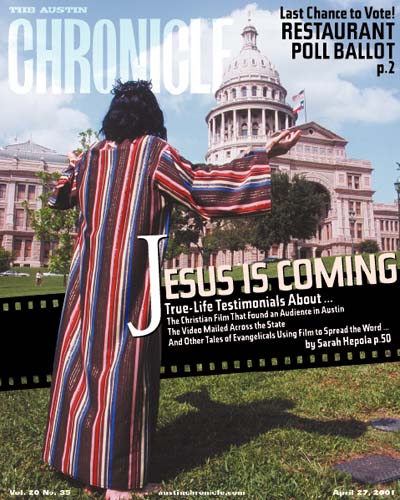 The Greater Chamber of Commerce wants AMD to build its next mega chip facility in Austin; Gary Bradley is calling on his friends at the Lege for help; the city's libraries have been hit with a budget crunch; Molly Ivins is glad she's left the Fort Worth Star-Telegram; Austin police spokeswoman Sally Muir has moved upstairs to become Chief Stan Knee's assistant.

An Update on Work in Progress at the Lege

Cuisines Editor Virginia B. Wood mentions the good news and the bad about local restaurants.

The New Rites of Spring

The Last Word in Instrumental Rock

A Man Under the Influence

No More Shall We Part

I Left My Sweet Homeland

Evolution 2
Re-Members Only, The Remix Album... Diamonds are Forever, Phonography, Kamnesia, The Life, Endangered Species, Until the End of Time, Crown Royal, The Skinny

The video mailed across the state, the Christian film that found an audience in Austin, and other stories of evangelicals using film to spread the word

The latter half of the 20th century has brought rapid change, sometimes extinction, to cultures which once seemed almost frozen in time. UT's Ethnographic Film Festival, April 27-29, shows how cultures all over the globe are handling that change.

Talk about your stakes through the heart -- Buffy the Vampire Slayer moves to the UPN and with that, moves out of Austin

Hi-De-Ho and The Duke Is Tops

Available on video as a double bill, these two all-black features -- one from 1938, the other from 1947 -- make a brilliant pairing.

Thou Shalt Not Kill ... Except

Any film that has a story co-written by Bruce Campbell and features Sam Raimi in an acting role should pique the interest of a certain type of trash-movie maven.

One Night at McCool's

The Taste of Others

Tremendously popular French film tosses together members of different social and aesthetic circles and watches as they circle each other, sniffing out sensibilities and impressions for cracks in the veneers.
arts & culture The Blue Genie boys -- those whimsical artists responsible for the armadillo-festooned entrance to Threadgill's World Headquarters, the guitar gal atop Fran's Hamburgers, and other mini-landmarks around Austin -- have been fun for the people who see them and fun for the people who made them. Making giant panels for the new Texas State History Museum, though, was a bit more than just that.

The smallish stage of the Mary Moody Northern Theatre is effectively transformed into the downright bloody, intense and exciting emergency room at a Chicago hospital when the Organic Theatre Company's E / R Emergency Room is brought to life at St. Edward's University under the tourniquet-tight direction of Ev Lunning.

With the Austin Symphony Orchestra in street clothes and everyone sporting bright yellow Symph-o-Vision glasses that turned even the dullest brown wall at the Bass into a rainbow of light, the kid-packed audience was taken on a colorful family musical journey.

The Circumference of a Squirrel

In the Zachary Scott Theatre Center production of playwright John Walch's The Circumference of a Squirrel, the story of a son struggling with the burden of his father -- a tale of rebellion and acceptance that belongs to every family and every generation -- is rendered so personally, in details both uncommon and illuminating, that it is nevertheless fresh and absorbing.
columns

Austin - bands, bikes, billboards, ballots, Bradley, and beyond - under scrutiny.

Hey, what's going on this week in Austin, public service-wise? Just read this!

McGuffey's Readers helped establish American education as we know it (or knew it).

Little flecks of factoid flavor for the coded oatmeal of your mind.

Local fashion steps out at the Designers' Guild of Austin second showing.

HIV considered as a deadly weapon

Every time I eat peanuts or peanut butter, I get a scratchy throat. About a year ago, I had some allergy testing and peanuts were not a problem. What's going on?

Every Joe Fan thinks he could run a sports franchise -- and maybe he's right. After all, there are plenty of examples of how easy it is to run one badly.