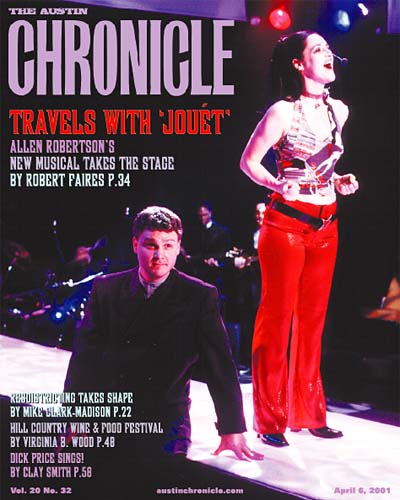 The new census numbers are out, and here's what to look for in the Lege's plans for redistricting.

Will the Charges Stick?

APD officer Samuel Ramirez is convicted of official oppression for forcing a woman to have sex with him while on duty, but a witness's statement may force a mistrial.

Developer Gary Bradley pulls back on legislation that would create a special development district for his Spillar Ranch property southwest of Austin, but the development could move forward anyway.

The council takes up recommendations from the Urban Transportation Commission, and considers a larger resolution to revamp the city's system of boards and commissions altogether.

The Bush budget and children's welfare, Pete Domenici and nuclear power & Jonah Goldberg on the joys of sweatshops

The grandfathered pollution exemption celebrates its 30th birthday, and the Lege takes another look at cleaning up the air

Cuisines editor Virginia B. Wood tracks down the latest restaurant news in this week's Food-o-File.

The final installment of Chronicle writer Mick Vann's series of reviews of Vietnamese restaurants in this week's Second Helpings.

Was America Really Made for Dick Price?

Angel in the Dark

Who amongst ye could have conjured Mainer Janet Bonney's true chicken story? Mark Lewis' documentary The Natural History of Chickens, playing on Wednesday at the Alamo Drafthouse as part of the Texas Documentary Tour, features real-life stories of fowl play so strange they must be true.

A report from the Vanity Fair Oscars party and other film-related news and upcoming events.

The most recent episode of The Sopranos illustrates the caste system among the women of the show -- but does watching a woman get beaten to death educate or entertain?

Straight Shooter: the Story of the Mamas and the Papas

How to Make an American Quilt

Not nearly as remarkable as its distinguished cast, but fine entertainment for a lazy day.

Along Came a Spider

The Widow of Saint-Pierre 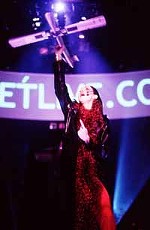 Search Through the Skies

The new musical Jouét represents a journey not only for the title character, a pop star in search of a home, but one for Austin composer Allen Robertson and for the city's Zachary Scott Theatre Center, which is producing its first original musical.

In Drawers, Dawn Davis Loring and the other six members of her Mosaic Dance Body explore our relationship to our underwear with wit and -- á la the lingerie itself -- a certain delicacy, a subtle evocation of rhythm and juxtaposition of bodies in space.

In the Austin Playhouse production of Mahalia!, director Don Toner has staged a neat chamber piece with a trio of talented actor / singers, allowing the singing to be spectacular and the rest of the play to operate simply.
columns

Robert Rodriguez, Chris Ware, Ben Sargent -- what do these men have in common? They all worked as cartoonists for The Daily Texan.

Policing the media, mediating the police.

Public Notice asks not what it can do for its community but what you can. This week features the third of a three-part list of Austin area Volunteer Opportunities.

Our Style Avatar goes to Hollywood (well, via his TV set!) and reports, Oscar style!

I feel very blessed to come from a family that lives long and generally healthy lives. I am 40 and still feel good, but my doctor recommended I take an aspirin tablet every day to prevent heart problems. What are the pros and cons?

Opening day for major league baseball. A fresh start for last year's losers. Enjoy it while you can -- by June, the big-market teams will be back in control.