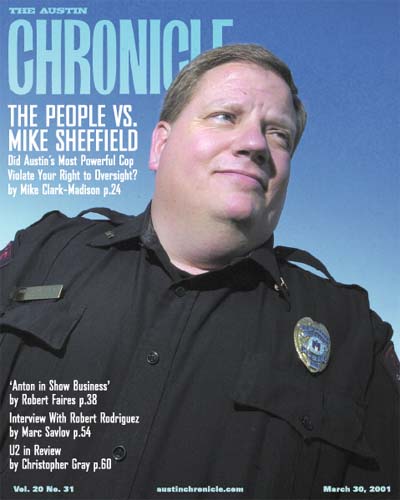 The People vs. Mike Sheffield

The new APD oversight agreement is a first for Austin -- but will it do what it's supposed to do?

Sheffield, the APA, and the Cop Wars

A Brief History of the APA

Harold Simmons' political contributions could get him a West Texas Waste Dump & Austin environmentalists rally around the documentary film Green.

Handicapping the (future) race for mayor

Handicapping the (future) race for mayor.Rep. Jim Dunnam introduces a bill that would place new restrictions on charter schools and limit the creation of new charters; charter school advocates protest, saying they're being punished for the misdeeds of a few.

The city council proposes a number of changes to several city departments, including DRID, PECSD, and the Planning Commission. On any given evening, Rebecca Chastenet de Géry writes, Zoot's cozy, warmly lit dining room fills with a cross-section of the city. Seated around the white-clothed tables you find young and old, dates and small groups, black-clad hipsters and the obvious "out of towners," all nodding in approval as they spear forkfuls of sautéed veal sweetbreads, roasted chicken, or seared duck.

Why two new books that cover the basics of waiting tables are so necessary.

Burger-Mania in this week's "Second Helpings." 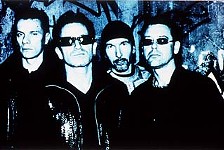 Why U2 is the best band ever

Breaking Barriers With Christ and Rock

A reprint of an Austin Chronicle Q&A from 1982 with U2's Bono Hewson and Adam Clayton.

A flood of weather (and music) following SXSW

Bill Maher flops in onscreen attempt to cut Harry Knowles down to size.

"The Flintstones saved me." Belinda Acosta looks at the legacy of William Hanna, who died last week at the age of 90.

The Animal House of the Nineties

This 1973 bizarro thriller is as disgusting (and compelling) as a car wreck.

A classic film that reflects a balance between early Seventies counterculture and the era's conservative right.

Christopher Nolan's breakthrough movie is a film noir thriller with a gimmick.

The first entry in Rodriguez's kids action movie remains the best in the series. In the backstage comedy Anton in Show Business, playwright Jane Martin wittily paints the contemporary stage as a madhouse overrun by loons and lunatics so preoccupied with money, image, and themselves that they can hardly be bothered to create art. And the State Theater Company's production takes us inside the insanity with an air of playfulness that keeps the audience primed for a good time.

The iron belly muses production of Shakespeare's Troilus and Cressida sometimes seems to have little to do with Shakespeare's text, and that's a problem, but director Sharon Sparlin does a fascinating job of "updating" the play, and when it works, it works wonders.

In PEXO, musicians with the Walter Thompson Orchestra, dancers from Ariel Dance Theatre, and several guest artists coax music from instruments, intentionally mangle lines of speech, and draw from a palette of physical movement at the command of conductor Thompson, creating an improvised yet shaped performance that is a complex, scattered spectacle for the ear and eye.

In Wallpaper Psalm, a strange operetta about an elderly lady in an old apartment building who appears to go crazy, writer Ruth Margraff and director Jason Neulander produce a psalm, a hymn sung in challenging style.
columns

There is probably no social agency we take for granted more than the police. In this week's cover story, Mike Clark-Madison offers a powerful profile of Mike Sheffield, 22-year APD veteran and head of the Austin Police Association.

Public Notice asks not what it can do for its community but what *you* can. This week features the second of a three-part list of Austin area Volunteer opportunities.

The First Rule of Trivia Is: You Gotta Talk About the Trivial.

Since the SXSW dissipation, your Style Avatar looks to the International Scene for his dirt …

Wings over the West: The Fredericksburg Butterfly Ranch and Habitat.

The Cost of Treatment.

I will be undergoing surgery in about a month. Are there certain nutrients that I should take before surgery?

Live sporting events? Barely. TV is choking them to death.