The Austin Avalanche of Rock & Roll!

When IRS Records' 'The Cutting Edge' Came to Town and Made Me Want to, Too

Amy Smith thought a judge would give her two years max for possession of crack cocaine; why is she doing 20?

Dispatches From the Drug War

O, Brother! Where Art Thou?

Although out of the headlines, the George W. Bush siblings have been doing quite nicely for themselves.

Spicewood residents are protesting plans by Rainbow Materials to build a concrete batch plant in their small, semirural community.

Austin is now officially in non-attainment of the Clean Air Act's ozone standard, but it's still unclear how Texas cities will enforce the federal law.

The council passes an aggressive panhandling ordinance as part of its "homeless self-sufficiency and responsibility initiative," angering homeless advocates.

Selling the Commons; The Corporate Tax-Dodgers

Ah, brunch, that lovely weekend repast where breakfast meets lunch with a mimosa in one hand and a Bloody Mary in the other, where Eggs Benedict and Crème Brûlée French Toast can share the same buffet line with a steamship round of beef and a mountain of cold boiled shrimp.

Cafe at the Four Seasons

What foodies are reading, and updates on local culinary news.

Second Helpings: BBQ Joints Within an Hour of Austin

For years, Central Texas towns such as Lockhart, Elgin, and Taylor have been home to some justifiably famous barbecue joints. Due to recent developments, tiny Spicewood west of Austin is now a necessary stop on the barbecue trail. Some of these places are of the meat market variety and others are full-service cafes. Whatever your pleasure, here's a partial list of joints within an hour's drive of Austin that were deemed worthy of inclusion in our 1999 Smokin' Hall of Fame.
music

Goodnight, Austin, Texas -- Wherever You Are

Screw indie rock -- Britt Daniel is aiming for the Top 40.

Ricky Skaggs, at home with God, Bill Monroe, and his own music.

Where Have All the Good Times Gone?

Ike Turner is about to be 70 and still a mack.

Local MC got the drive.

Spotlight: Explosions in the Sky

Austin's Explosions in the Sky rise above most instrumental music.

The Red House Painters are back.

Scottish instrumental quintet refutes any and all categories.

The Lion of Zimbabwe prepares to roar at SXSW.

What Was Different About The Austin Chronicle's 2000-2001 Music Poll?

Underwater Moonlight... and How It Got There

The Bastard Sons of Johnny Cash

The Bastard Sons of Johnny Cash

They Missed the Perfume

Lemmings Travel to the Sea

Waiting for the Death of My Generation

Do What You Want

Up High in the Night

Abandoned: The Betrayal of America's Immigrants

A devastating, twisted work, Amores Perros is marred only by a bloated running time and a bloodless conclusion.

Two years after graduation, a gang of high school buddies reunites for an evening of air hockey and reverse peristalsis.

Every Austinite should see this film, the human underside of our relentless growth; filmmakers should see it as a testimony to letting the story come to you.

Despite its first-film raggedness, there's plenty of charm in this documentary about Austin's garage sale culture

Peter Sutherland's film about New York city bike messengers is that rare documentary that allows the viewer to live the spectacle rather than view it.

"Welcome to the world of existential angst."

This collection's themes of self-responsibility, introspection, and carpe diem made for a charming program.

In her documentary about the residents of east side Milwaukee's "Caesar's Park," Sarah Price captures many of the idiosyncrasies and quirks of her over-the-fence characters, but we're left, like the local walkabout, looking in vain for real "friends."

The Devil You Know: Inside the Mind of Todd McFarlane

Todd McFarlane gives everything to the camera in this engaging documentary which delves deep into the psyche of the creator of the ever-popular Spawn comic books.

Melissa Shachat's vibrantly colored documentary looks at Gibtown, the refuge of longtime carnival and circus workers when they aren't on the road.

That this Western succeeds as well as it does on its very low budget is a testament to the passion of these filmmakers.

Beautifully shot (to a fault), meticulously edited, and well-acted, Risk comes off as a watered-down Hollywood-style caper movie with a little more grit than your average Tom Cruise fare.

If Scratch isn't the hip-hop doc to end all hip-hop docs, then it's stultifyingly close.

The gags come fast and furious, and the fair amount of gross-out humor makes Super Troopers play like a cop version of Caddyshack.

We Sold Our Souls for Rock 'n' Roll

The genius of Penelope Spheeris' OzzFest documentary is her whip-smart editing style, which weaves skeins of meaning behind the madness with crosscuts and montage.

One can safely assume that Herman Melville never imagined the title character of his dark tale "Bartleby the Scrivener" in an episode of The Drew Carey Show.

This paean to the late-Eighties punk DIY fanzine underground follows black-clad, brooding 'zinester Teri and her scruffy pals on a random adventure from South Carolina to NYC.

Gorgeously shot and superbly acted, Felicidades is a fascinating nightmare.

"How's your news?" may seem an odd question to ask a stranger, but in this documentary about disabled adults who travel across the country as news reporters, it isn't the question that matters.

Low Self-Esteem Girl amounts to nothing terribly special, which makes its Jury Award for Best Narrative Feature all the more baffling.

This documentary on the all-female concert tour is both overlong and undernourished, and the end result is likely to sustain interest for only the most avid Lilith fan.

Pavarotti of the Plains records the story of Texas legend Don Walser with simple, plainspoken eloquence.

A wholly originally, wholly beautiful rumination on memory and rootlessness

This PBS-backed documentary, directed by Hector Galán, succeeds as both a Tejano cultural history and a heartfelt love ballad to the most maligned of instruments.

Amato: A Love Affair With Opera

Stephen Ives tells the touching story of Tony and Sally Amato, the couple who founded a small New York company in 1948 and have been giving young singers a place to perform in full productions of classic operas for half a century.

A House on a Hill

One of the central conceits of A House on a Hill is that the building is not as important as the work put into it, and that idea seems to have bled into the film itself.

You can't make this shit up.

The Catholic machine gets another working over in this Italian coming-of-age story about a young boy and his love for the house servant.

This inspired program is an inventive and deeply emotional compilation that not only works psychologically but also resonates across gender, age, and sexual orientation

Corporate behemoth Wal-Mart plans a new store in Ashland, and the local "Pink Flamingos" organize against the mega-mart while town fathers want business to continue as usual.

Documentarian Alan Berliner explores his obsession with names, most specifically, his own name and the fact that he must share it with at least 12 other Alan (or Allen or Allan …) Berliners in the world.

This celebration of the Gypsies of Spain blends documentary and narrative styles to create a unique film, one which uses a simple story to tell volumes about a culture often misunderstood by the masses

Strikingly conceived and executed, with visual panache and diamond-hard portrayals from the leads, Memento is one to remember.

Okie Noodling is Bradley Beesley's affectionate, funny, and engaging look at the "noodlers" in his home state.

As 54-year-old lovers in an uneasy, reluctant courtship, Jill Clayburgh and Jeffrey Tambor nearly save this picture, but it's a losing battle.

Like The Sweet Hereafter, red deer is a meditative tale of loss and redemption which seeks answers in the unexplained events of everyday life. Unlike that 1997 critics favorite, however, red deer lacks the visual appeal to sustain this slowgoing narrative.

The Trouble With Lou

Winners of the SXSW 2001 Film Festival

An annotated list of this year's Web Awards winners 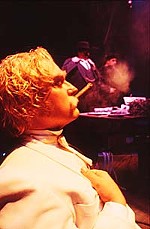 Austin theatre actor Robert Fisher has the heart of a rock & roller, the work ethic of a medieval craftsman, and the style of a Bob Fosse. Either he's in the wrong business or he is, as playwright Kirk Lynn calls him, "a wonder."

New York is calling, and Austin performers from the Rude Mechanicals to the Flaming Idiots to MOMFest are answering.

The cover of this issue is a reprint of the cover from the first Chronicle Music Poll results 20 years ago. The poll results in this issue are just the latest chapter.

Our secret fantasies were made public by Elvis Presley.

Welcome to our style column's third in a series on local fashion photographers. This week, find out all about Bob Sherman and why frogs , lambs, and satanic pom-pom girls love him.

I don't know what to believe about vitamin C! It was always promoted as safe and helpful for flu and colds, and now I hear that it may increase the risk of cancer and heart disease. Is it worth that risk just to take care of a cold?

Maybe the old coach has been out in the desert too long, but if there's anything to these rumors about Bobby Knight and Texas Tech, it sounds too good to be true.