Johnston High School has problems with grades, attendance, dropouts, a magnet program resented by the host school, and a high turnover rate among principals. Will new principal Sal Cavazos stay and can he make a difference?

As the economy takes a dive, many high tech workers find themselves stuck on the temping treadmill

Welcome to Austin. You're Screwed.

Can you get there from here? In downtown Austin, the answer is no.

The House considers a Top 10% law to address inequities at magnet high schools, and UT is embroiled in a free speech debate after a scuffle between faculty and university police.

The council listens for four hours as proponents and opponents of the doomed motion to change Rosewood Avenue to Dorothy Turner Avenue make their case; the motion failed for lack of a second.

The Industrial Areas Foundation demonstrates its substantial clout at the Southwest IAF Conference, held in Austin earlier this week.

Tinkering With the Machinery of Death

The Chronicle's Cuisines writers show you how to eat meatless for weeks without duplication.

The Garden of Ethnic Delights

The results of the Seventh Annual Central Market Gumbo Contest, and lots of restaurant news

Musicalia at the SXSW Film Festival

What You Won't See on MTV

One week 'til SXSW and already the music is hitting the fan. 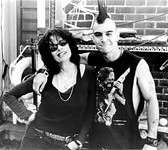 The Luckiest Girl in the World

An interview with Sissy Spacek, inducted into the first annual Texas Film Hall of Fame on March 9.

Rip Torn: All in the Family

UT film professor Mitko Panov returned to his homeland, the former Yugoslavia, to interview the men he knew in the Yugoslav Federal Army. "They were no better or worse or more bloodthirsty than any of us -- that's my point. Whatever happened there can very easily happen anywhere." The film, Comrades, plays at SXSW Film as part of the Texas Documentary Tour.

Does KLBJ's new TV ad using bare-backed women as billboards upset TV Eye's Belinda Acosta? Not as much as those warm and fuzzy pharmaceutical ads that prey on hypochondria and insult women.

Because the two lovers at the heart of this lush period piece never verbalize or consummate their feelings, “mood” is the right word to characterize this stunningly evocative Chinese love story.

Putting Himself 'Out Here'

Theatre Arts and English teacher Rick Garcia has put himself "out here," on Austin's fringes, n the off-the-map, lost-worldness of Johnston High School, to reach out to some of the poorest kids in one of Austin's most neglected neighborhoods and make a difference through that rare and vital cocktail: art and education.

In the Public Domain Theatre Company's production of King Lear, director Robi Polgar and company bring Shakespeare's play into the present with high tech and high fashion, and the smooth execution of the concept create a novel version of this familiar tragedy with a striking proximity to our lives.

This week's "Public Notice" goes techy and says, 'Let's tear down the digital divide and give all these laid-off geeks something to do!'

The Painted Churches of Fayette County.

Are soy foods really good for us or not?

Juwan Howard's negative image is almost entirely a media invention; moreover, he could be the key piece in the Dallas Mavericks' growth into a championship team.