Fear & Loathing on the Inaugural Trail

One man's journey to the Bush inauguration confirms more than it denies. 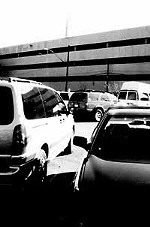 A Profile of Austin's Center for Public Policy Priorities

Convicted for a murder he did not commit, Christopher Ochoa was freed in Austin thanks to the efforts of a project all the way in Wisconsin.

The City Council adopts a legislative agenda focused on protecting the city’s right to govern itself.

The Texas Parks and Wildlife Department makes a timely hire: Jeff Francell, formerly of the Nature Conservancy as head of its land acquisition program.

The New Governor opens his campaign for re-election.

What the Governor Didn't Talk About

The IAJE vision of jazz's future.

The Austin Music Awards lineup starts to trickle out.

Death of the Alphabet EP

You'll Never Get to Heaven If You Break My Heart

Will Taylor and Strings Attached

Will Taylor and Strings Attached

Each one of Krzysztof Kieslowski's 10-part Decalogue is constructed carefully enough to be seen on its own. But together, they are a jigsaw puzzle of color, texture, emotion, and meaning. We take a look at this extraordinary series, which the Austin Film Society will screen at the Alamo Drafthouse on Saturdays through March 3.

Just when a heavy cynicism about the future of independent film has overtaken the industry and most of its observers, the Sundance Film Festival came along during the early weeks of 2001 and, almost unexpectedly, brightened the downcast mood shared by its most dour participants.

Back from Sundance and the town of Austin is springing back to life.

For those of you yawning through The Mole and gagging through Temptation Island, Survivor is back, here to remind us what we liked (and loathed) about "reality TV" in the first place.

Michael Wadleigh's original cut of the three-day peace and music festival, released in 1970, is perhaps the best rock concert documentary ever made. This director's cut DVD is even better.

Kevin Costner is superb in this sometimes charming coming-of-age / crime caper film directed by Clint Eastwood, but A Perfect World is not a perfect film.

A roundup of the FronteraFest 2001 Long Fringe.

The Many Loves of Columbina

7 Rooms to the Soul

The Conduct of Life

The Grid (or: Beyond the Wishing Well)

A new economic report shows the arts in Texas to be fundamental part of the economy, and Austin theatres enjoy a booming beginning to 2001.

With blown glass in colors as bright as stained glass in the sunshine and materials from the city dump, Einar and Jamex de la Torre create havoc. Their uncompromising, irreverent mixed-media pieces could adorn an Internet cafe, a 15th-century Spanish altar, or an Aztec household and still be shocking fun.
columns

Lost Austin behind us, Smart Growth ahead?

This week's "Public Notice" is all about that animal urge. Woof!

One of the family passed on this week. The Style Avatar's sister remembers the Houston Chronicle's Maxine Mesinger.

A little meat for your cerebral sandwich.

If you want to understand the legacy of Bill Clinton forget the Elvis analogies and remember Orson Welles, who created film characters marked by their own self-corruption.

Well, the bad guys won the Super Bowl -- led by genuine bad guy Ray Lewis -- but Jennifer Capriati made her own good news down in Australia.