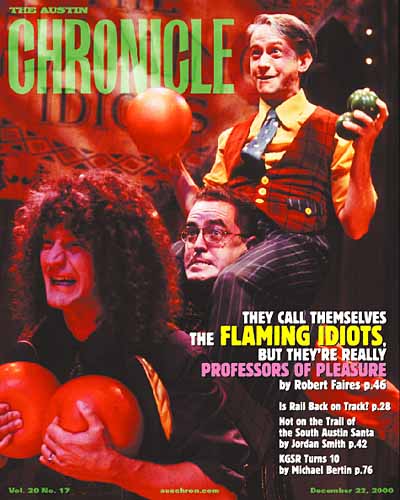 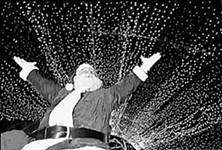 On the Santa Trail

Ace reporter Jordan Smith is hot on the trail of Austin's own Santa. 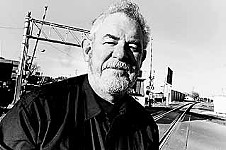 Light Rail's narrow defeat at the polls has probably spared Capital Metro an assault by legislators in January. But the agency is trying to figure out how to keep rail on track while satisfying Republican legislators who want sales tax returned.

Cheney and Bush interview prospective hires. Which Texans go to Washington as Bush takes office and the economy cools down?

280 law professors, including some 13 at UT Law, sign a petition protesting the U.S. Supreme Court's decision to halt the recounting of votes in Florida.

Changes are afoot at the Statesman now that little George is going to Washington.

As Gov. Bush moves to D.C. in a wave of acclamation, the Legislature prepares to meet over redistricting and new legislation.

Potluck at the Pedernales

Cuisines editor Virginia B. Wood asked each of the writers who contribute to the Cuisines section to prepare one or two dishes for a potluck dinner. Here's what they came up with.

Considering the date, it's likely all your Christmas shopping is already done, but Cuisines Editor Virginia B. Wood has some ideas for gifts that keep giving long after the wrapping paper has been thrown away. 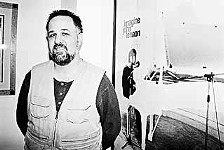 The Little Station That Could

Nourishment for the Soul

Martha Stewart Living: Home for the Holidays, Another Rosie Christmas

A Merry Christmas with Big Crosby & the Andrew Sisters

Sleighed: The Other Side of Christmas

My Kind of Christmas 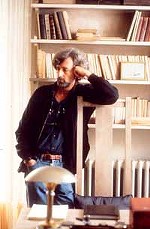 Crimes of Passion and Prose

With Quills, Philip Kaufman (Henry & June, The Unbearable Lightness of Being) has made another film about the startling fusion between literature and sex.

To the eyes of Austin animator Bob Sabiston, those ubiquitous Earthlink.com commercials by Klasky Csupo Inc. (the creators of Rugrats) look an awful lot like the work created by his proprietary software, which is being used in the new Richard Linklater feature Waking Life.

Don't know what gift to get your couch potato? Well, why not buy your spud-butt a book? Yes, a book.

A Christmas Story strikes a balance between being sentimental and irreverent, with Peter Billingsley putting in one of the better performances ever from a child actor and the rest of the cast clearly having a good time.

This Santa might actually frighten a small child, chortling uncontrollably through the whole movie and leering at the camera. More than likely, however, a kid above the age of four would probably find it unbearably hokey and dumb.

If Ed Wood had ever made a Christmas movie, it would probably have turned out a lot like this.

This English-language movie is set in a provincial French village in 1959 and deals with the pressing question of whether the seductive and mysterious powers of chocolate can soothe the priggish tendencies of the local townsfolk – and during Lent, no less.

You Can Count On Me 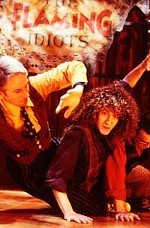 Their name may suggest a lack of intelligence, but make no mistake, the Flaming Idiots are wise men when it comes to comedy.

Dispatches from New York: Playwright Aaron Mack Schloff on the reading of his work In Galicia and artist Michael A. Arthur on creating drawings for American Ballet Theatre.

Gather 'round the Yule log and the figgy pudding, get out a paper and pen, and jot down some of these items form our Annual Holiday Wish List 2000. Local organizations need you!

Let's Get Drunk and Read Poetry

It's perfect outside for staying in with a good book ... especially one loaded with lots of pretty pictures ... of semi-nude men ...

Why does a nice Jewish boy have to put up a Christmas tree?