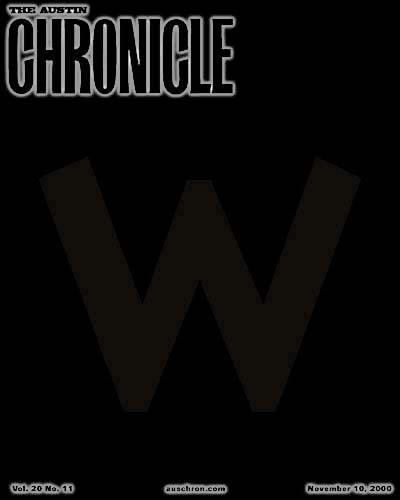 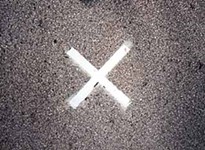 Kathy McCarty wants to know "Why?" Why is wanting to know more about the Kennedy Assassination such social suicide?

Should You Choose to Go ...

Fear and Loathing in Austin

Just Off the Green

Nov. 7: Election Day. It was a dark and stormy night…

City Council announces that it will buy land for a proposed homeless shelter outright, after the Salvation Army placed stipulations on the sale of the downtown land which the city said it was unable to meet. Also, other council news.

You spontaneously slow down and breathe easier when you enter Basil's, Barbara Chisholm writes. This is not a hipster hot spot that is peopled with folks checking the door to see if someone more interesting than their current partner has entered. People come here to concentrate on each other without distraction.

Will Travel For Food

The latest culinary news in Austin

After the Last Hurrah

Election 2000 gets rained out.

All That You Can't Leave Behind

I Wish I Could Fly

Are You Through Yet?

At Home With the Groovebox

Tender Is the Savage
screens

Six years ago, Marc Singer wasn't homeless, and he wasn't a filmmaker. With Dark Days, he became both.

Why are this year's season premieres so darn dull? Also, a goodbye to Steve Allen and news on a class action suit alleging age discrimination filed by 28 TV writers.

She's Gotta Have It, Pi

Deep in your heart, you should "follow." Released just a few years ago, this film version of the Off Broadway workhorse captures the feeling of the innocent and bygone era of movie musicals. But it differs from the original work's romantic minimalism as it opens up the play cinematically.

Requiem for a Dream

Portrait of a young junkie – and those he loves.

Smiling Fish and Goat On Fire

Image of a First Lady

Based on her physical appearance alone, Jean Stapleton is a natural to portray Eleanor. But it turns out that the accomplished actress' resemblance to the first lady doesn't end there. It extends to her idealism, her feminism, and even her awakening to activism.

Private History of a Campaign that Failed

Stand-up comic Eddie Gossling is not your president today, and he has a lot of people to blame for it. Here is his first-hand account of his weeklong campaign for the White House.

Bingo: Scenes of Money and Death

A vague performance at the center of the Public Domain Theatre Company's production of Edward Bond's Bingo diminishes the impact of Bond's play, but does not eclipse it. It feels relevant right here, right now.

Here's Cyndi Williams' new play, Fish: an evocation of people and situations like the psychic furniture of a darker David Lynch film.

The UT Department of Theatre & Dance production of Paula Vogel's The Baltimore Waltz is as technically solid as they come, but some of the performances are all over the map when they should be rooted in a terrifying reality.
columns

Eye of the Tiger, baby! Are you up to it? Up to this week's public service challenges? Kate and the Pee En crew takes you there.

The Style Avatar takes on Reader X's challenge to not say "Wet," and weighs in on cargo pants.

To hell with the critics! Remember the Titans is a great sports movie -- the best since Rocky.

The use of tampons as collection devices for HIV testing.