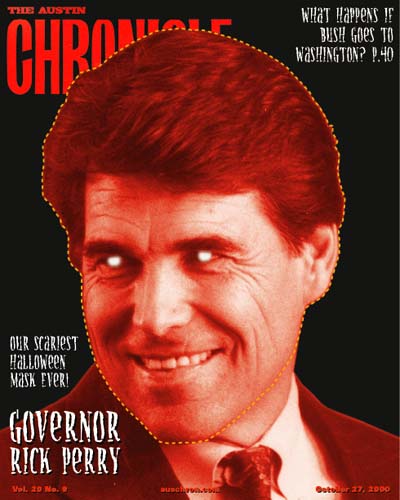 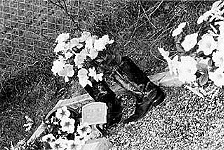 Meiling Guentzel explores her fascination with small local graveyards and death and learns about life in the process.

Local Cemeteries: What Do You Want on Your Tombstone? 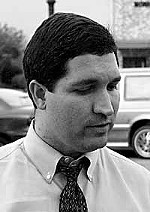 The Hottest Race in Texas

The David Fisher-Todd Staples Senate Contest in East Texas Will Decide the Fate of the State Senate -- and the U.S. House

When Bush Marches on Washington, the Deck Gets Shuffled. Our Predictions:

All the Right Moves

The Greening of George W. Bush

An industry pollution control program started backed by Gov. George W. Bush has cleaned less than 3% of the industrial toxic emissions it aimed to clean up.

It's the Planet, Stupid

George W. Bush is not sure global warming and the greenhouse effect are a problem.

In response to East Austinites' outrage, Danny Thomas comes out against the light rail referendum.

A pipeline explosion in North Austin raises questions about Longhorn Pipeline's plan to run gas through a 50-year-old pipeline across the Edwards Aquifer.

Texas Department of Housing and Community Affairs board member Florita Bell Griffin goes on trial for allegedly conspiring to benefit from housing projects she approved.

Austin Adopt-a-Minefield is struggling to raise enough money to clear Praca, a village in Bosnia, of land mines.

Former TFSC head Dick McNeil testifies that he talked to Governor George W. Bush about the ongoing investigation into funeral giant SCI, a statement that contradicts Bush's sworn testimony on the matter.

What's coming up at City Council.

Port Austin, the turbo-hyped broadband expo planned for Nov. 9-11, has been canceled.

CAMPO undergoes the peer review study sought by anti-light rail activists, but the results turn out quite differently than the road warriors expected. 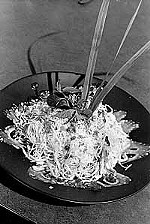 On 620, about halfway between Mansfield Dam and Lakeway, in Lakeway Plaza, is one of Austin's best pan-Asian restaurants. It's a small spot with limited seating and tiny tables turning out some of the finest Thai, Cambodian, Laotian, and Burmese cuisine around. As a matter of fact, they turn out the only Cambodian, Laotian, and Burmese cuisine in Austin, and it's not even on the menu!

Austin has grown so far north that Dot's Place is no longer really in the country; the construction worker clientele is now joined by hungry high tech office workers from the Silicon Hills. Diners patiently snake their way through a maze inside the front door to a cafeteria line loaded daily with an embarrassment of riches.
music 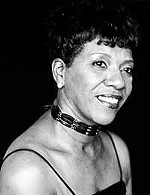 'Bo Knows Not to be Stupid'

What's up in the live music capital this week

The Marshall Mathers LP, G.O.A.T., Let's Get Ready, Chocolate Starfish and the Hot Dog Flavored Water, You Nasty, To Put It Bluntly, Art Official Intelligence, The Ecleftic, Stankonia, New Beats from the Delta

The Friends Of Rachel Worth

The Spectacular Sadness Of Rex Hobart & The Misery Boys 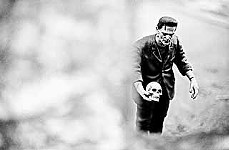 The unassuming, 42-year-old Bill Jones is Austin's premier garage-kit model maker, and that Godzilla leering down at you from the corner of the room is only 1 / 500th scale. Lucky you.

Photos and award winners from Cinematexas5

In 1967, Hobart Ison shot and killed Hugh O'Connor, who was filming a documentary on Ison's property. In her documentary Stranger With a Camera (showing at the Alamo Drafthouse this Wednesday, November 1), Elizabeth Barret examines the context that brought these two men together -- one with a gun and one with a camera.

A new documentary on IFC examines seminal horror films of the Sixties and Seventies and persuasively argues that the images and ideology of these groundbreaking films were influenced by the mood of the times.

Does it seem like this new crop of series, including Ed and Gideon's Crossing, mask their chauvinism under fresh-faced idealism and earnestness -- or is it just us?

Night of the Living Dead, The Texas Chainsaw Massacre, Halloween, Last House on the Left

Carax's follow-up to The Lovers on the Bridge is based on Herman Melville's novel Pierre, or the Ambiguities, and is rich in images and ideas. A man who shuffles between the houses of his mother and fiancée becomes involved with a woman who says she is his illegitimate sister. 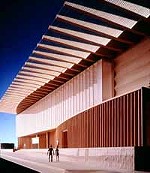 Making a Front Porch for the City

As he was completing the final design for the Austin Museum of Art's long-awaited downtown facility, architect Richard Gluckman took time to discuss the project, his approach to architecture, and what it means to design buildings for a boomtown.

Austin playwrights are drawing attention around the nation, and one theatre company is getting hit by the Macbeth curse smack in the face.

In the State Theater Company production A Macbeth, director Guy Chandler Roberts strips the Scottish Play of its dramatic spectacle and boils it down into a compelling ritual of human evil, a Black Mass.

Director Marshall Ryan Maresca may lose the audience at times in the female-dominated world of his Macbeth, but he keeps hearts pounding on a trip through the supernatural world of Dunsinane and the many worlds of human psychosis.
columns

The opposition to Light Rail is rebutted by our Editor.

More Light Rail hubbub and a few Naderite cries in the wilderness.

PN takes you through the final weeks of Breast Cancer Awareness Month and looks ahead to events on the public service horizon.

Michael Ventura reflects on the gateway of Time.

Coach is having none of this "Subway Series" BS. Only question is: Which team does he hate the most?

From Galveston to Cozumel on a Carnival cruise ship: food, gambling, food, and ruins.

Volunteer Call for peer counelors at the HIV Wellness Center.