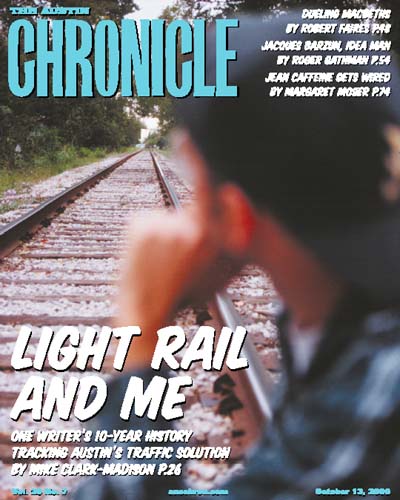 Same as It Ever Was

The Facts So Far

City Coucil wants to cut a deal with Stratus Properties on the Barton Creek properties because they think House Bill 1704 gives them no other option.

The Man Behind Stratus

Republican Jill Warren is behind in the polls and going negative on her Democratic opponent Ann Kitchen, in the race for House District 48 in Travis County.

Who gets punished when George W. Bush comes home to Austin after losing the election.

Doggett in Austin to lead meeting in opposition to the Longhorn Pipeline, Log Cabin Republicans endorse local republicans, Mike Levy will not run for mayor. Ralph Nader in Austin, protesters prepare for Fortune 500.

Thanks to soaring energy prices, wind energy is becoming cheaper than that fueled by natural gas and other fossil.fuels.

The city's SMARTHousing initiative gets its first concrete proposal for affordable housing, a 55-unit complex for lower-income seniors.

Council hears supporters and those in opposition to the city's proposed central booking facility, which would be moved from 7th and I-35 to a residential neighborhood west of downtown.

Corporate luminaries in town for the Fortune 500 conference will be met by a bevy of protesters against the event. 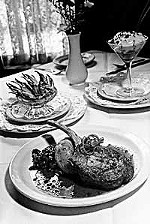 The Paggi House opened in 1980, and immediately became known as one of Austin's most beautiful and best dining establishments. Twenty years later, the restaurant is still one of Austin's finest.

You can tell it's October in Austin by the number of food and wine-related events packed into the coming week. Chronicle Cuisines editor Virginia B. Wood informs readers of all of them. 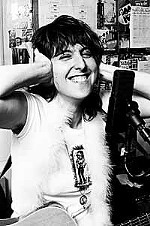 Too Much Caffeine Woman

Queen of the Meadow

My Heart's in Memphis: The Songs of Dan Penn 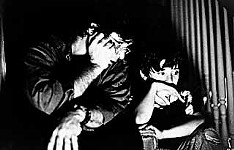 Top of His Craft

Prior to his appearance at the Austin Film Festival, writer / director Steven Zaillian remembers his first film, his most successful, and the lessons he's learned along the way.

A Man Is Mostly Water

In Guest's parodic hands, the Westminster Dog Show goes to the hounds.

Girl on the Bridge 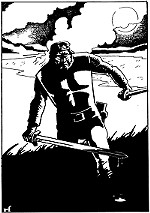 Dueling Macbeths on the stages of Austin prove once again this Shakespearean killer's undying popularity.

The premiere production of Bianka's Wake, Blake Yelavich's farce about a badly behaved Madonna-like celeb has some solid physical comedy and pleasing physicality, but the lack of internal logic and shallow humor make it a weak evening of theatre.

The Subterranean Theatre Company production of John Mighton's Body and Soul is provocative and features a talented cast, but it never lets us get to know the play's characters.
columns

Editor Louis Black weighs in on the Light Rail question.

Light Rail, Green Politics, and much ado about the city's growing pains.

Being president of America is not good for one's health.

Coach went to his first Texas / OU football game last weekend, and boy, was it a doozie.

The natural glory of the Hill Country's Westcave Preserve and its 40-foot waterfall.