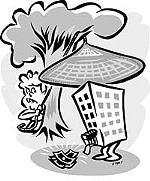 All Belinda Acosta wanted was a roof over her head that wouldn't explode into flames. Little did she know that jumping into the Austin housing market is like jumping from the frying pan into the fire. Can the City Make Good on Its Affordable Housing Promise?

Dusting Away the Cobwebs

A drug bust in tiny Tulia, Texas opens up old racial wounds and raises questions about the veracity of the undercover cop-for-hire who orchestrated it all.

The University of Texas announces the finalists for the design of its new art museum (after rejecting the original design as too modern) and everyone on the list, with few minor exceptions, hews closely to the classical or neo-classical tradition.

Mark Tschurr, former head of a successful Austin technology company, is unanimously chosen as board chairman of the Save Our Springs Alliance.

A public forum over Austin Energy's proposed "secrecy resolution," which will allow the utility to keep some financial information under wraps in response to competition, yields plenty of discussion but little agreement.

KUT's new general manager describes his vision for the future of the public radio station. Take Out the Heat

Sure, complaining about the heat only makes it worse. A long string of 100 degree days presents an unsolvable problem but it just so happens that there's one summer problem we can solve. What to do about dinner on a day when the ambient blast furnace is stuck in the triple digits and operating any appliance hotter than a microwave is a sure sign of madness? Where to go, what to buy, how to put a tasty meal on the table without working up a sweat?

Austin is becoming famous for its local brands; Cuisines editor Virginia B. Wood reveals why.

Virginia B. Wood explains the swapping going on at the Texas Hill Country Wine & Food Festival and updates readers on local culinary news. 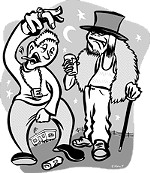 Straight Out the Trailer

Chewing the fat with Brent Best of Denton tub-thumpers Slobberbone

Out There and Back, Communicate

The Moon and Antarctica

A Journey Out Of Time

At 21 years old, actress Charmian Carr couldn't have known that the character she was portraying -- Liesl von Trapp in The Sound of Music -- would follow her for the rest of her life. Prior to her appearance at The Sound of Music: Sing-a-Long, a benefit for Project Transitions and aGLIFF, Carr opens up about being forever Liesl.

The Sound of Music: Sing-a-Long

Here, for your consideration, are the Emmy nominations for dramas, along with nominees selected by columnist Belinda Acosta for her second annual Clare Awards.

But I'm a Cheerleader

Campy film is fun viewing and shines light on lipstick lesbians who are willing to put their pom-poms where their mouths are.

Thomas and the Magic Railroad 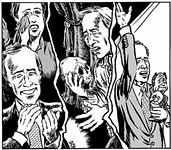 The theatre community sounds off on critics as artists.

A new name for the merged Paramount Theatre/State Theater Company and a new artistic director.

If we must choose between avoiding conflicts of interest or writing of the community from the inside, we choose the latter.

"Pthlllllt! Thwaarrrrp. Fweeephthtl?"
"Yes, I agree, Mr. Smarty Pants does have some interesting facts this week."

The restored J.M. Koch Hotel Bed and Breakfast in D'Hannis is part of a vanishing breed of Texas frontier buildings.

While contemplating his inability to do a pull-up, Coach comes to appreciate the beauty of the Tour de France and Tiger Woods' steady brilliance.

Pump away: The new AIDS scare circulating over e-mail is a hoax.