In this time of 30-second Happy Meals and 10-minute workouts, Jay Hardwig finds a better way to spend his time: napping.

The Road to Rail

Can light rail in Austin work well with Smart Growth?

The Short and Troubled History of Austin's Streetcar System

Texas Turnpike Authority changes its position on SH 130; Max Nofziger has joined the anti-light rail campaign; Father Bill Elliott is not resigning, he's being forced out against his wishes; University of Texas makes another selection of short-listed architects for the Blanton Museum; Renetta Armadour is leaving OutYouth.

The fractious, lively process that led to the adoption of the ECC Neighborhood Plan holds some lessons for future neighborhood planners.

Throughout the five-week trial of the Branch Davidians' case against the federal government inWaco, the ghosts of 84 people killed at Mount Carmel haunted the courtroom.

Hyde Park residents win a key Planning Commission vote preserving an alley beside Hyde Park Baptist Church's existing garage, but it's still unclear if they can win the war against a second garage proposed for an adjacent lot.

Saying they're tired of seeing Texas portrayed negatively by Al Gore and in the press, six prominent Texans have formed the Proud of Texas Committee to speak out against such "misrepresentations." The new version of Gumbo's has made the transition from mom-and-pop shop to a classy, upscale chain operation. It definitely makes the grade.

Virginia B. Wood gets the lowdown on Sandra Bullock's recent party spot and updates readers on local culinary news. 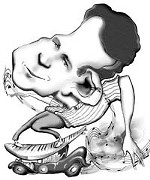 They Lost My Grandmother's Brain

One lover of the grape interviews another - one who writes songs and plays music.

Chrysta Bell quits the Souvenirs; the Meat Puppets' new record could come out in record time. It Came From Beyond

"I saw my first cadaver when I was about five years old. I saw my first rotting corpse at 10." Now, at 35, Guillermo del Toro is probably the world's most promising horror film director.

Have you had your fill of Who Wants To Be a Millionaire? Are you stuffed to the gills from consuming too many hours of Survivor, Big Brother, The Real World, Road Rules, or Making the Band? Better get used to it -- there's a whole lot more on the way.

A Piece of Eden

Through the Eyes of a Kid

Bringing kids to adult theatre is uncool, but what's about children's theatre, where they belong? Ada Calhoun borrows a friend's three-and-a-half-year-old son to find out and discovers that theatre ain't all magic when you're a preschooler.

A major change in direction for the Austin Circle of Theatres.

The State Theater Company's production of Nunsense is long on laughs if short on story, according to Chronicle writer Skipper Chong Warson.

Rosencrantz and Guildenstern Are Dead: Smaller Than Life

Chronicle critic Ada Calhoun finds The Off Center's production of Rosencrantz and Guildenstern Are Dead gasping for air..

According to Chronicle writer Wayne Alan Brenner, West Side Story survives just fine in a "post-apocalyptic future," thanks to an amazing production at Zilker Hillside Theatre.
columns

Light rail is a gamble, but an important gamble.

"Alex Jones is to patriotism ... what hot dogs are to meat."

Follow the yellow brick road to Wounded Knee in this account of L. Frank Baum's effort to tame the untamable.

The David Powell HIV Clinic is set to open its new, larger doors next month.