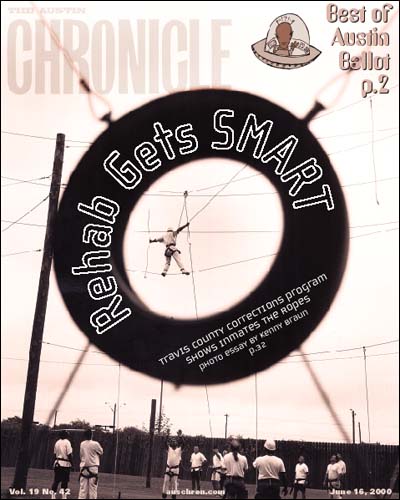 How healthy is Austin's Colorado River?

Room at the Inn

Left Out in the Cold

University of Texas employees will be staging a sickout to protest low pay and benefits; citizen planners in the East Cesar Chavez Neighborhood Planning Team are honored for their work; the Dawson Neighborhood Association tries to reach a compromise to keep Southwestern Bell from tearing down homes in their neighborhood; The Save Our Springs Alliance honors Brigid Shea as a "Barton Springs Hero"; Statesman political reporter Dylan Rivera leaves for Portland, Oregon.

CAMPO adopts a 25-year plan that calls for bigger, longer roads and full funding for Austin's transportation plans, a stipulation that will require some creative funding solutions.

CAMPO backs SH 130 but doesn't vote on an alignment, the most contentious issue surrounding the proposed I-35 bypass.

Mayor Kirk Watson announces a transportation plan with something for everyone.

Florita Bell Griffin is indicted for allegedly conspiring to profit from her position as a governing board member of the state housing agency.

Council reluctantly approves retail in the new city hall, with the stipulation that there be no gaudy storefronts on Second Street.

Lots has changed of late at the Empanada Parlour, Rebecca Chastenet de Géry writes, but the restaurant's festive little pockets stuffed with spirited meat, vegetable, and fruit blends are as delicious as ever, and continue to enjoy a dedicated local following. The Kings of Monterrey

By the Hand of the Father

Previewing Alejandro Escovedo's new autobiographical play, By the Hand of the Father.

The Gourds weren't Phishing for trouble when they covered "Gin and Juice"; the Meat Puppets have (probably) found a new home.

Mermaid Avenue Vol. II, 'Til We Outnumber 'Em: The Songs of Woody Guthrie

Down to the Promised Land: Five Years of Bloodshot Records

Fold Your Hands Child, You Walk Like a Peasant

Whatever You Love, You Are

Pastoral Composure, Gravitational Systems, Time Is of the Essence Is Beyond Time In a city filled with artists and filmmakers, Luke Savisky is an original -- an innovative projectionist whose unique art has graced the surfaces of buildings, rock stars, video screens, and more for over 15 years.

Academy Award-nominated screenwriter Stewart Stern remembers writing Rebel Without a Cause:"I was caught up in the same kind of fervency and speed that the characters were."

With PBS' Point of View (POV) documentary series, columnist Belinda Acosta has found a place where her ideals about the medium collide with reality.

A Time to Love and a Time to Die 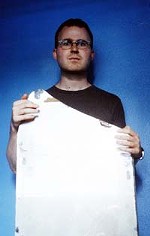 With another acting job in a new play, his own new theatre about to open, his own stage company that champions theatre as something fun as well as substantive, and a lot of friends to help him make "good stuff" onstage, is Ron Berry the Happiest Man in Austin?

More cultural philanthropy and a disturbing Statesman report on same.

She was Pop before Andy silkscreened soup cans or Oldenburg piled up erasers, and the Blanton Museum of Art's new exhibition "From Zero to Infinity: Yayoi Kusama in Context" shows her pioneering influence in a survey of Pop Art that is freakin' amazing.

WAR: Conflict in the Cubicles

In his latest script, playwright Kirk Lynn sends the Rude Mechanicals off to War, and the result is another Rude Mechs show that is conceptual and cryptic, literary and obscure, but also very funny, with the company managing to make genuinely original observations on conflict and escapism in the energetic realm of absurdist comedy.

Second Stone Theatre's A Mid-Indian Summer Night's Dream takes the play out of Athens and sets it in Austin (kind of), but while the idea is striking, the production doesn't make the transition as completely as it could.
columns

This week, to celebrate Father's Day, "Public Notice" makes room for daddies and implores dykes to check their boobies.

Ray Lewis may not have committed murder, but he's hardly the wronged innocent that the media are now making him out to be.