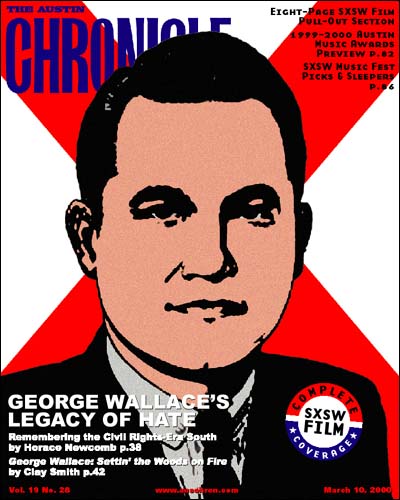 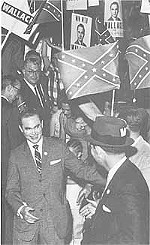 The Least of These

UT professor Horace Newcomb reflects on the segregation South on the release of his friend and colleague Paul Stekler's documentary George Wallace: Settin' the Woods on Fire.

The Road to Damascus

The story behind Paul Stekler and Daniel McCabe's documentary George Wallace: Settin' the Woods on Fire

A transportation bond package combining roads and light rail is planned for November.

Oh, To Be a Constable

Mary arnold gets down to brass tacks on bradley deal

The City Council considers architects for its new City Hall.

George W. Bush sweeps the primaries and launches a major attack onAl Gore, who will be his opponent in the November presidential election race.

The City Council lifts a building moratorium onHyde Park Baptist Church, allowing the church to file a site plan for a five-story garage and setting off a storm of protests from neighbors.

The Asian-AmericanAlliance holds a fundraiser for Mayor Kirk Watson, raising more than $10,000.

Down to the Wire

SOS, Bradley, and the city try to work out their differences and come to an agreement they all can live with on the Bradley Settlement.

Like any self-respecting Texas town, Austin boasts good Mexican eating all over the city. But for sheer volume of respectable, even wonderful, eateries, South First Street is the place to go.

It's All in the Latitude

In this week's edition of Food-o-file, Austin Chronicle Cuisines editor Virginia B. Wood goes on a mini-rant and updates readers on local restaurant news.

Where to find fine barbecue in Austin.
music

The usual suspects return: Miles Zuniga, Daniel Johnston, Sandra Bullock, Bob Schneider, and the Asylum Street Spankers; also, Patti Smith returns to Austin for SXSW, as do a bunch of other people.

See It Another Way

Spend a Night in the Box

Ron Flynt and the Bluehearts

Cars and Speed and Flight

Just prior to his appearance at SXSW Film for a retrospective of his work, Monte Hellman talks about a career in film.

Prior to a retrospective of his documentaries at SXSWFilm, D.A. Pennebaker reflects on a career spent as a fly on the wall.

BY MARJORIE BAUMGARTEN AND MARC SAVLOV

How You Became a Criminal

An interview with Canadian documentary filmmaker Ron Mann about his newest film, Grass.

Comic Steven Wright offers observations on his return to short film, "One Soldier," the pressure of following up an Academy Award, and this bad trick called life.

Spectres of the Spectrum

Is it a coincidence that at the turn of the century, magic and the supernatural has made another appearance on TV?

With cultural festivals popping up around Austin like orange traffic cones, a few festival organizers offer their insights into running a festival.

A big vote of confidence for new Ballet Austin artistic director Stephen Mills; a way you can "Bowl With the Bards".

Think trancer's paradise + Donovan -- the hippie-dippy stuff + a clever metafictive show in which a live performer conducts an orchestra on film, and you'll have a sense of Andrew Baron's Century Plant.

In The House of the Moles: Live, Love, Get the Fuck Up!

Writer Terry Galloway and theatre company Rude Mechanicals are "an amazing match" in the slapstick-and-death piece In the House of the Moles.
columns

No soul is more appropriate for the SXSW film festival than the late actor Warren Oates.

This week, your sassy yet totally sincere public service column goes wiggy over the new Patti Smith CDand tells you that her free show at SXSW will benefit a good cause. Other good causes, as usual, are pimped within as well..

The seamy underbelly of the Austin salon scene, part II.

It's Tom vs. Jerry vs. Butch vs. horses vs. Hitler in this week's fact smackdown.

Part 3 of the Coach's trilogy on girls' high school basketball.

The Fredericksburg Herb Farm is everything great about the Hill Country town condensed down to 14 acres.

A type of protein may help reverse AIDS-related wasting syndromes.