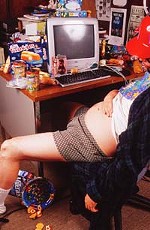 Welcome to the Chronicle's guide to a New Year's home alone, loser.

The Loser's Night Before New Year

An Austin Chronicle book review of You Are Worthless: Depressing Nuggets of Wisdom Sure to Ruin Your Day by Dr. Oswald T. Pratt & Dr. Scott Dikkers

We are Waiting for Sockot

Music to Wallow By

Wayne Alan Brenner's list for maudlin millennium-toasting listening displeasure is sure to send you flinging yourself off of Leonard Cohen's "Tower of Song."

Eating alone this New Year's? Do it in style: Convenience-food epicurean Greg Beets warms your holiday cockles with some tasty ideas for your millennial throwdown.

Follow Lorne Opler on his New Year's quest to make his laundry A-okay for A2K!

Where the Suds Are Getting School to Work

Aided by an infusion of new tax dollars from high-tech and other industries, Del Valle ISD finds success by investing heavily in school-to-career programs.

The World Trade Organization meeting in Seattle collapsed under its own weight.

More sponsors are added to A2K New Year's Eve party, Austin Energy Green Choice program is about to be announced.

Parents and neighborhood activists are outraged that the city has failed to implement recommendations made by the Sidewalk Task Force years ago.

UT Regents Rita Clements and Tony Sanchez torpedoed Herzog & De Meuron's design for the Blanton Museum because it didn't fit in with the Campus Master Plan. But neither do most buildings built on campus since the mid-1960s.

George W. Bush's tightly choreographed campaign excludes all but the friendliest media; but will it backfire? The Cook and The Gardener: A Year of Recipes and Writings for the French Countryside

Take a Fast Food Tour with Greg Beets in this week's installment.
music 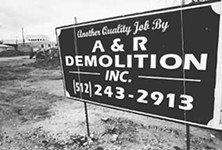 The Year It All Went Wrong

Looking back at club closings in Austin in 1999.

All the good and happy things that happened in Austin music, 1999.

Jack Kerouac Reads "On the Road", A Coney Island of the Mind

Eternity and a Day
screens 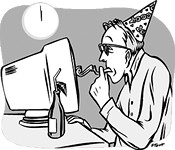 Why party in line when you can party online?

Hankering for millennium specials? Got 27 hours to kill? Find out what's in store this holiday season on the boob tube.

The Wind and the Lion

Anna and the King

A parody of Gene Roddenberry's TV world and its rabid fans. For more than 40 years, José Francisco Treviño has been exploring the world of art. Now, in the largest retrospective it has ever presented, Mexic-Arte Museum shows us Treviño's discoveries, and Mary Jane Garza explains how they came to be.

Candidates in the running for artistic director of Ballet Austin.

Robert Faires gets a kick from the Flaming Idiots at the Zachary Scott Theatre Center.

The oddest part of the next week or so is not how much will happen but how very little really will.

Public Notice ponders the end of the world as we know it, and feels damn fine. Happy New Year!

Lo-carb diets are all the rage right now. Funny thing, they've been around a long time...

How do YOU spell Shakespeare?

The back roads of northeastern Travis County snake around enough to make a Sunday drive seem like a journey.

Perhaps no journey has been more momentous over the last two decades than the one experienced by those infected with and those affected by HIV/AIDS.