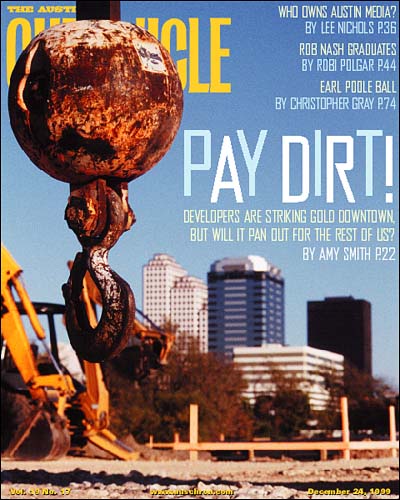 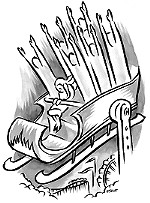 Robin Bradford takes a trip back to examine love, trust, and safety.

For years he'd blamed his sister for destroying his comic book, a book worth over two grand today. Looking back at a painful memory brings Wayne Alan Brenner that much closer to understanding why losing that darned comic book at age seven meant so much.

Downtown design guidelines provide a blueprint for the future of the central city.

Despite Sen. Gonzalo Barrientos' concerted efforts, the CAMPO board rejects peer review on a vote of 11 to 8.

Against all odds and expectations, Hyde Park Baptist Church agrees to negotiate with neighbors on the construction of a proposed five-story parking garage in Hyde Park.

The world’s major corporations have realized that the media can be big money, and they have invested heavily.

The Customs of Christmas

The Keeper of the Nog

The Infectious Love of Good Wine

The latest local cookbooks, changes to the menu at Vespaio, and a special Boxing Day celebration at Becker Vineyards 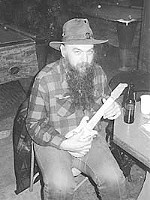 Exploring the legacy of one of Austin's great, unsung singer-songwriters, Blaze Foley

Live at the Austin Outhouse

I Wanna Be Santa Claus

Rockin' Around the Christmas Tree

The Magic of Christmas, Merry Christmas Wherever You Are

Dr. Seuss' How the Grinch Stole Christmas!, Horton Hears a Who!
screens

The Brain Behind Cyc

Doug Lenat discusses artificial intelligence and its increasing presence in the next century.

That holiday spirit getting to be too much? Here's a look at Vegging Television: what you watch when you can't watch anything.

Walk on the Wild Side

Leave Her to Heavan

Stone's tale of a professional football team is full of excess, machismo, and a ripped-out eyeball.

Without resorting to dogma, ideological tracts, or cautionary tales, Boys Don't Cry evocatively tells the true story of a young Nebraska woman who changed her sexual identity and transformed herself (sans surgery) into a young man. Swank won her first Oscar for this role.

Man on the Moon

With Senioritis, the conclusion to his quartet of plays set at a Catholic high school in Houston, solo performer Rob Nash is all set to graduate -- to Off-Broadway, says Robi Polgar.

A report on the financial momentum of the proposed Long Center for the Performing Arts; the loss of two beloved area musicians and teachers.

The Santaland Diaries: Mean, Mean, Mean -- But in a Good Way

Every year, for two weeks around the holidays, "Public Notice" hands the type over to the Public Service Community and lets them directly address you, dear readers, with requests for things they need. They need you.

What does a Dark Age demand of a good person?

Rockport captures the sea breeze and the hearts of visitors.

HIV has been taken hostage in the abstinence debate.