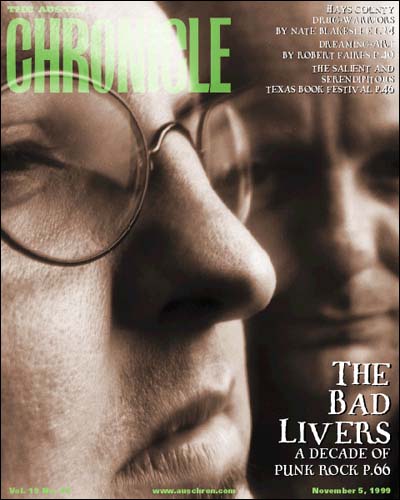 The Austin Peace and Justice Coalition is coordinating the bus trip to Georgia for the mass demonstration calling for the closure of the School of the Americas, TxDOT's Web site gets hundreds of new visitors curious about I-35 improvement projects, and the Austin Design Commission completes its proposed set of downtown design guidelines.

Bring your appetite and a healthy Western palate to Ranch 616.

What to eat and who to see during the Texas Book Festival, November 6-7; how to procure the first certified organic beef in the state of Texas; and updates on local restaurant news.

Mick Vann likes what he finds at Saigon Kitchen.
music

The Butthole Surfers find themselves uncovered, Don Walser takes a dive, and time and music march on.

Choose Your Own Adventure

A short list of the most promising games slated to hit home systems before Christmas.

Game Over for Mac Gaming?

The world is not ending anytime soon -- but neither are television specials about the twilight of the millennium.

This year in Austin, autumn brings a Spring Storm, and with it Actors Repertory of Texas, the realization of the city's long-cherished dream of a locally based professional theatre company.

A View From the Bridge: Go Away, Little Girl

Ada Calhoun examines the Alley Theatre's touring production of A View From the Bridge.

No sympathy for Pete Rose

River Inn Resort near Hunt is a perfect fall getaway.