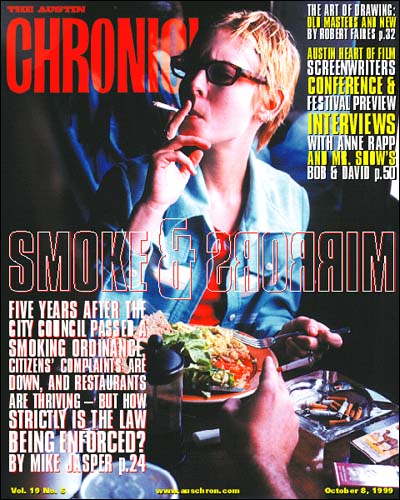 The city’s smoking ordinance is rather lax in bars and restaurants, but hardly anyone’s complaining

A Lighter Shade of Rail

SCI on the Skids

Details about a new nonprofit whose goal is to build home food gardens as well as upcoming food events in Austin.

Liberty Lunch is finally reduced to dust bin debris even as Mueller Airport hosts the "Airport Rave" and some 6,000 attendees, one of which was NOT Biz Markie, who was a no-show. Who says there are no more live music venues in Austin. Once-local guitarist Evan Johns hospitalized in DC with severe liver problems, just as Bad Livers finish recording a new album. Ken Lieck, King of the Segue.

The screenwriter of Cookie’s Fortune talks about storytelling, working in the business, and the incredible collaborator she found in Robert Altman.

Comedy writers Bob Odenkirk and David Cross took everything they’d learned from past comic masters and made their Mr. Show variety show into something completely different.

The Territory Begins A New Season

News from the Austin film world.

A small-screen return to twitching noses, magic potions, and girls who hold the power; also, a review of TNT’s daring live-action Animal Farm.

Cheech and Chong's Next Movie

The Adventures of Elmo in Grouchland

My Life So Far

For the Love of the Line

In the exhibitions “Old Master Drawings From the Suida-Manning Collection” at the Blanton Museum of Art and “Selected 20th-Century Master Drawings” at the Norwood Gallery, we can indulge our eyes in samples of art spanning five centuries.

Reports on The "Three 'J's" of Austin culture And Lily Tomlin At UT.

Van Cliburn, Lynn Harrell and the UT Symphony Orchestra: Autobiography Played Out at the Piano

Close your eyes in Portland, and it sounds a lot like Austin.

Differing takes on Town Lake going Greek; too many zeros for Babich; and the Chronicle film reviewers take another hit.

A playmate for the fishberry?

Nepotism is disliked only by those who have no familial connections to make use of.

Tyler, Texas' own City of Roses.

In search of more synonyms for "idiot."