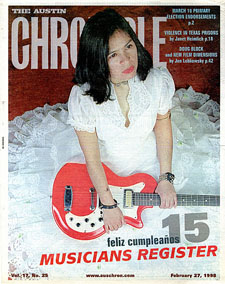 It's Time to Retire the B-1 Bomber

Not Your Same Old Slusher

The Mouse That Roared

Press By the Numbers

The Chicken and Egg Deal

Getting Press: The Haves

Getting Press: The Have Nots

Doug Block's Film, Home Page, and How It Grew

And Now, a Word From Our Subject...

Stunning visuals highlight this story in which a city's inhabitants are the victims of some cosmic experiment being conducted by a race of aliens.

Possibly due to the story's origin as a Ruth Rendell novel, this is the most coherent, viewer-friendly narratives Almodóvar's ever filmed. It also focuses on male relationships and features a young Javier Bardem.

This Belgian film is a warm, startling, funny, and realistic study of what happens when a 7-year-old boy is convinced, beyond all reason and outward evidence to the contrary, that he is really a girl.

Swept From the Sea

How Much Do You Really Know About These Freaks?

We Get What We Want