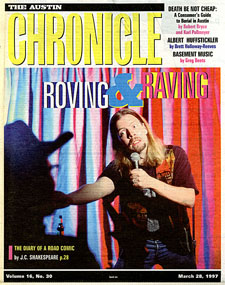 Schools on the Aquifer?

The Cost of the Longest Vacation You'll Ever Take

Segregation in the Hereafter?

Death Be Not Cheap

Dying on the Cheap

The Lodge at Lakeview

A Passionate Venue for Thai Food

The Netherworld of Iconoclastic Music

They Blowed Up Real Good!

When We Were Kings

The 1972 Best Picture Oscar-winner is a great pulp drama co-authored for the screen by Coppola and novelist Mario Puzo (the script also won an Oscar). The casting is also great, with Brando delivering one of the signature performances of his career (he, too, won an Oscar), and the very young Pacino seizing his screen destiny.

Selena Quintanilla Pérez, the barrier-crashing Tejano singer who was murdered at the age of 23, is the subject of this biopic that was also the breakout film role for Jennifer Lopez.

When We Were Kings

This documentary Oscar winner is a vivid retelling of the "Rumble in the Jungle," in which Muhammad Ali bested George Foreman in a storied boxing match in Kinshasa, Zaire.
arts & culture

Live Oak Theatre Celebrates Guthrie, but Which One?

Portrait of the Artist as a Road Comic

Long Drives, Low Pay, and Drunks -- What a Life!