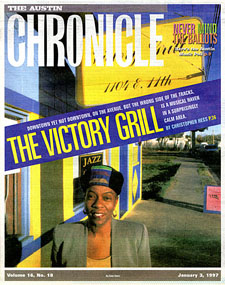 A Rough Beast Kicks in the Water

This animated science fiction based on a graphic novel set the modern standard of excellence for Japanese anime.

International espionage with a body count

Comedy about raising the dead doesn't raise too many laughs

The for-profit foster system exposed in this heartrending drama

Some presents should stay unwrapped in this twisted horror

The con is on in Miranda July's oddball crime caper

Different visions of the modern American working class, all beaten by the same system

Ottolenghi and the Cakes of Versailles

Mangled Italian creature feature should be even shorter

Sweetness in the Belly

Unusual take on the white savior narrative, set against the Ethiopian civil war

Austin Lyric Opera Ventures Into the Frontier Once More

Missive to the Ending Year