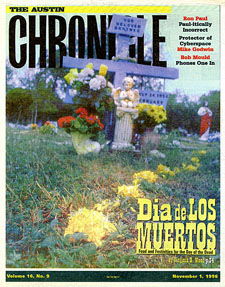 A Whole Lotta Trouble for a Little Less Corruption

Picnic in a Cemetery

No Tours, No Interviews

Doubling Back with Bob Mould

Gabriel Over the White House

Carmen Miranda: Bananas Is My Business

“You’re so money and you don’t even know it.”

This Shakespeare rendition is not so much a reconceptualization as a recontextualization of the 400-year-old play. This Romeo + Juliet is a rich visual feast, besotted with the fervor of its acrobatic camerawork and kinetic staging and its mind-bending aggregation of unrelated but resonant fragments of 20th century iconography. It is a Shakespearean work thoroughly conceived for the screen. DiCaprio and Danes again prove that they are two of the best actors of their generation. And William Shakespeare has once more demonstrated that he is a storyteller for all time.
arts & culture

These Are the Days

Werewolves! Do They Get AIDS?

Get Downtown With Your Bad Selves

My Vote, My Message