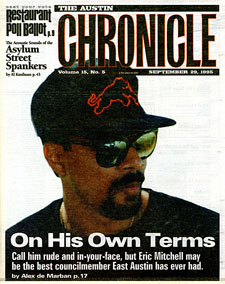 Crazy for the Asylum Grounds

It's a First: Cunningham Responds

Only in Concept
music

A serial killer who uses the seven deadly sins as his modus operandi is hunted by two New York City detectives in this hellish take on Nineties film noir.

Snake in the Eagle's Shadow

Fashion photographer Douglas Keeve turns his camera on designer Isaac Mizrahi for an intriguing and often funny look into the making of a seasonal fashion collection.
arts & culture

The Unbearable Ineptness of Being Dad

Weird Scenes Inside the Joke Mine