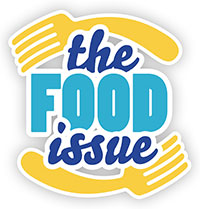 Austin is a city in transition, and its food scene has kept apace: In what feels like a blink of the eye, we’ve transformed into a foodie town, an urban farming hub, and ground zero for the gospel of the breakfast taco. Our first-ever Food Issue takes a closer look at the city’s new flavor profile and also debuts our First Plates Awards, doled out to the restaurants and trailers that have our tongues wagging most, from up-and-comers and under-the-radar spots to beloved institutions. Dig in, y’all.

From the Print Edition

Keeping the Lights on at Casa de Luz

Cuts would impact Texans in need

Eat to the Beat

There Will Be Food

Austin's film catering gurus learn how to make do in a changing industry. Spoiler alert: The answer is never pizza.

Austin restaurants get serious about design

Five Austin cookbooks to sink your teeth into

Truly a community cookbook for the ages

The Everything Thai Cookbook, 2nd ed.

Local chef takes the terror out of Thai

The 10,000-year-old diet gets a French makeover

How one tragic accident led to a therapeutic cookbook

This one's for "real Americana folks," not highbrow foodies

The food staff on their fondness for holidays past: epiphanies, friendship, near-disaster, disaster, and always a full plate

It took an international incident of nuclear brinksmanship to teach me the real meaning of Thanksgiving.

Rubies Among the Shooting Stars

A trip to the headwaters of the Pecos River in July 1976 resulted in the culinary surprise of a lifetime.

Required Culture Under the Pink Chandelier

My Quest for Chiles en Nogada

My relationship with tomatoes is a passionate one.

Why Virginia B. Wood's first culinary epiphany got her in big trouble.

The Infectious Love of Good Wine

On being a terrible waiter

What could possibly be the reason for the way I eat?

The weight of a family cookbook

The trenches of the service industry are full of lessons

Valentine’s dinner for one

Food Issue Extra Helpings: Cafe Bistro, Will You Be My Valentine?

I'm taking my little one on a date… to the mall

Do certain foods have supernatural powers?

Valentine's is still delicious for us single people

Valentine’s playlist: ‘Someone left the cake out in the rain’

Notes from the 'Chronicle' lunch line

Cooking tips from one True Believer to another

A few lines about the lines around Austin

Food Issue Extra Helpings: My Relationship as a Google Doc

We're smacking our lips in anticipation of First Plates

A soundtrack for your chicken posole

The story behind the Eastside Green Tomato photo gallery

Dinner, it's not just for dates anymore

10 summer TV favorites and what to eat while watching them

The boon and bane of living alone

We need to talk about Austin's takeout issue for a minute

John Mackey, “Conscious Capitalism,” and the Ideology of Food

Recipes for making the best out of time. Lots of time.

Book Yourself Some Eats

Literary quotations about food – past, present, and post-apocalyptic

The 'Chronicle' Is Baked

Confessions from a full-time addict