Pilsners and lagers and helles, oh my! 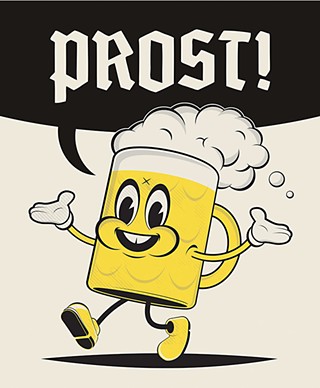 From your local beer garden to the dozens of tents erected in Munich each year around this time, beer is the driving force behind Oktoberfest. Indeed, beer is a cornerstone of German culture for many reasons.

One reason is that prior to industrialization, Germans drank beer in the absence of clean drinking water, with the bonus of being a nutritional powerhouse. Says Chip McElroy, biochemist and founder of Live Oak Brewing Co., "It was traditionally a very nutritious food source. It's got some calories, it's got vitamins. A small amount of protein. And the most important part probably is that it was clean." The combination of boiling and the antibacterial qualities of hops made beer a more sterile hydration choice.

And, for hundreds of years, the Reinheitsgebot, or beer purity law, imposed strict rules about the price and ingredients of beer. In 1516, Duke Wilhelm IV of Bavaria declared that only barley, hops, and water could be used to brew beer. This law was partly intended to reduce competition between bakers and brewers for ingredients like wheat and rye, the rationale being that this would keep prices of both bread and beer low. Win-win. (What's more, The Oxford Companion to Beer suggests that this law, coming into effect at the cusp of the Reformation, also served to exclude botanicals like juniper and rosemary, which were associated with pagan rituals.)

While some argue that the Reinheitsgebot held German beer back in terms of constraining experimentation, craftsmanship, and creativity, it does give brewers the appeal to tradition and cultural heritage to underscore their German bona fides, even though the purity law was expanded in 1993 to allow for yeast (already accepted as part of the brewing process rather than as an ingredient).

But according to McElroy, what really sets German beers apart is how easy they are to drink. "You can drink them and enjoy them over a long sitting," he explains. "You can enjoy several of them. They don't wear out your palate. You can sit around and argue politics with your friends for a long time."

Just be sure that, regardless of whether you're close to home or required a passport to drink a lot of beers over a long period of time, you're drinking responsibly and leaving the driving to a sober friend.


What's the Deal With Those Gingerbread Hearts? And can I eat them?

Oktoberfest is about more than just drinking beer and eating sausage and roast chicken under a tent while listening to polka music. It's also a folk festival akin to a state fair. There are rides and artisan markets and competitions. There are also souvenirs; at Oktoberfest, among the most popular and visible souvenirs are lebkuchenherzen, or gingerbread hearts. 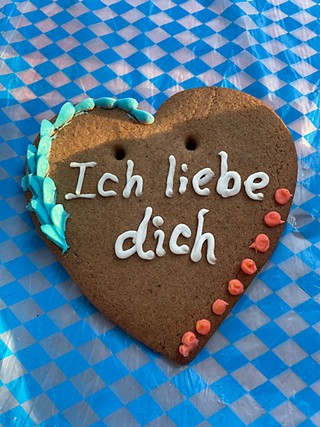 The decorated hearts at Oktoberfest in Munich range in size from a slightly oversized standard cookie to dinner-plate-sized and are made with classic spices like nutmeg, allspice, cinnamon, ginger, and more. They are decorated with sayings like "Ich liebe dich" ("I love you") and "spatzl" ("sweetheart"). Sweethearts buy them for each other as expressions of love, with the size of the lebkuchenherzen being directly proportional to one's love. In this way, they are similar to Texans' high school homecoming mums, when midcentury boys would give their dates an in-season chrysanthemum adorned with ribbons to wear to the big game and dance. (These, of course, have ballooned into 20-pound noisemaking, light-up monstrosities costing hundreds of dollars and functioning more as capitalistic flexing than as sweet expressions of love, but I digress.)

Lebkuchenherzen are edible, but are cooked to study hardness and, after being hand-decorated by highly trained herzl painters, are shrink-wrapped and strung with ribbon so that you can wear them around your neck and, later, hang them up as a sweet memento. In Austin, Easy Tiger offered a limited supply of lebkuchen hearts for $12 apiece during its Oktoberfest celebrations; Bake Austin is offering a Family Oktoberfest Heart class on Oct. 16 (bakeaustin.com).– M.H.