The hottest peppers are most threatened by increasing temperatures 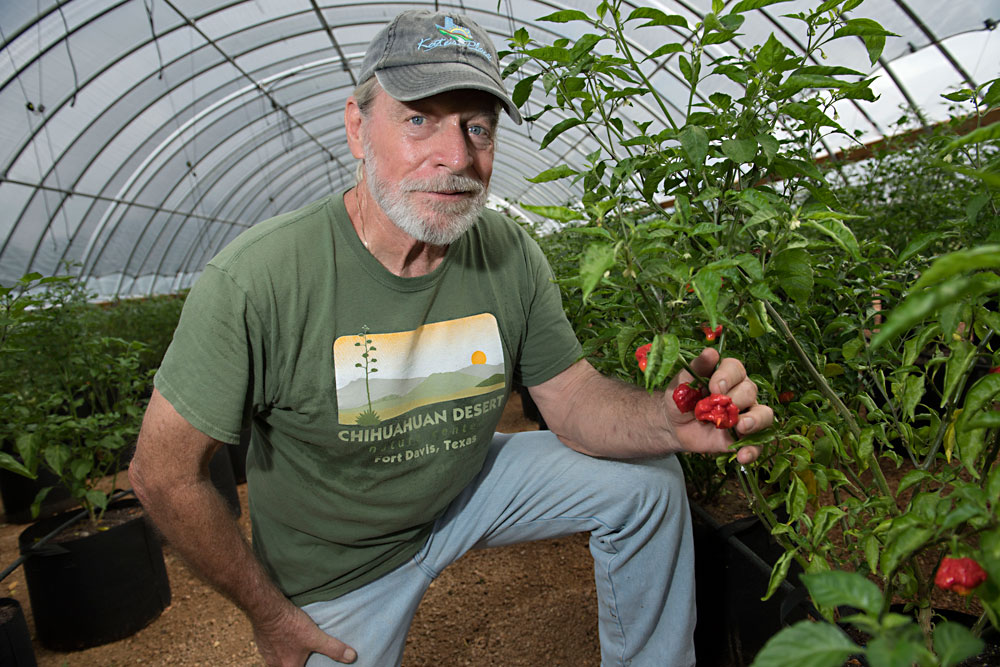 Austin's had a super hot summer, even for Texas. We've had the hottest July since 2011, with a mean temperature of 90.6 degrees. Our weather folks looked and found our temperatures were 4.8 degrees warmer than an average July in Austin, almost a full degree warmer than the previous hottest July 11 years ago. Plus, it's been bone-dry, a situation only recently rectified by Shoal Creek bursting containment in a series of storms that resulted in not just local but statewide floods. Are these our new summers going forward? How could this affect the crops that ultimately fuel our lives? And ultimately, how could climate change potentially affect our beloved hot sauces, down to the cultivation of peppers, and their potential spiciness?

In June, the Huy Fong company, makers of Sriracha, forecasted a shortage due to weather conditions, particularly a massive drought in Mexico, causing a chile pepper shortage. While I find this kind of transparency from a company refreshing, it paints a bland, sad picture: less Sriracha in our lives. And while drought may be a local condition, it isn't isolated to Mexico, nor New Mexico. Drought is here in Central Texas, along with that stunning sun.

Ron Tilton from Hill Country Hot Peppers in Wimberley had a lot to say about how the summer of 2022 is pummeling his pepper crop. The day we spoke, the sky was studded with fat gray clouds, threatening rain and hiding the sun. He called it a "farmer's favorite weather." We haven't had enough of that this year.

“The heat this summer made it difficult to grow the super hot peppers. The milder they are, the easier they are to grow.” – Ron Tilton, Hill Country Hot Peppers

A lifelong gardener, Tilton is a retired scientist and instructor for UTMB on Galveston Island. His wife had a restaurant, so he grew specialized peppers for her. He grew his proclivity for gardening from a few dozen to several hundred varieties of peppers, which were way more than he could consume or give away, and some were too hot for his wife's restaurant. So a hobby became a business, now 10 years old.

Tilton explained the pepper growing process, and why this summer has been abrasive: "We germinate pepper seeds in January, and put them in the ground in April [to] May, when all chances of frost have passed – peppers are deliciously sensitive, like tomatoes."

That's nearly six months of growing time before Tilton sees a return. And typically, he would have picked some peppers already. But now it's almost September, and Tilton still hasn't picked any peppers because it's too hot.

Tilton further explained that farmers can force plant growth by feeding the soil, and induce flowering. But farmers have no control over pollination and fruiting.

"That requires a specific temperature range that we haven't seen yet this year. Even the overnight low temps are too hot. We cannot get [our peppers] to fruit. Peppers are sun-loving plants, but they have a limit. When you get up to the hot ones, we have nothing. We have picked nothing. We will probably salvage our season, but it'll be late. We've worked eight months [January to August] to produce a crop that is delayed. And I don't think we're alone here in Texas. Our farm only has 1,500 pepper plants; people with hundreds of acres have real problems."

Tilton's farm grows everything that goes in their hot sauces and for other makers: Carolina Reapers, dragon peppers, Fresnos, jalapeños, poblanos, yellow bell peppers, South American chiles, ajíes, Jamaican Scotch bonnets, Guatemalan habanero. Tilton says, "You can eat them like candy. Well, I can, because my capsaicin receptors have been altered."

Normally HCHP depends on rainwater for their crops, but it hasn't rained there since the beginning of May. There are hacks for that: drip irrigation, and a greenhouse-like setup to protect those "deliciously sensitive" peppers.

"The ground is so dry, we use drip irrigation so we water each plant specifically. But it takes hours to drip through the ground. Most farmers don't have that setup. We can only assume into the future, we'll enclose acres in a structure to control the temperature inside.

"This year has been real eye-opening," he continues. "It cost us a lot in terms of fertilizer, and the amount of water we're using on 1 acre of land, and that's unsustainable. Farming in closed environments is the way of the future."

What about climate change affecting a hot pepper's hotness? Tilton said, "As a scientist, I don't have enough data to indicate either way. The heat this summer made it difficult to grow the super hot peppers. The milder they are, the easier they are to grow. That will affect the ability of farmers like myself to produce these peppers going forward. But no one can answer the capsaicin question definitively, as there are no studies. And that doesn't address the matter of climate change, which occurs over centuries. Millennia. We're going to see it rapidly accelerate. We're already decades in. Human activity is affecting climate change. But if someone can say, 'This pepper I grew is hotter because of climate change,' I would question that data. You would need a controlled study from year to year, correlated with the temperature changes."

Interested in learning more about the science of farming, I called Savannah Rugg, the department chair of agricultural sciences at Austin Community College, which has a 17-acre urban farm. Rugg agreed the future of farming is enclosed. 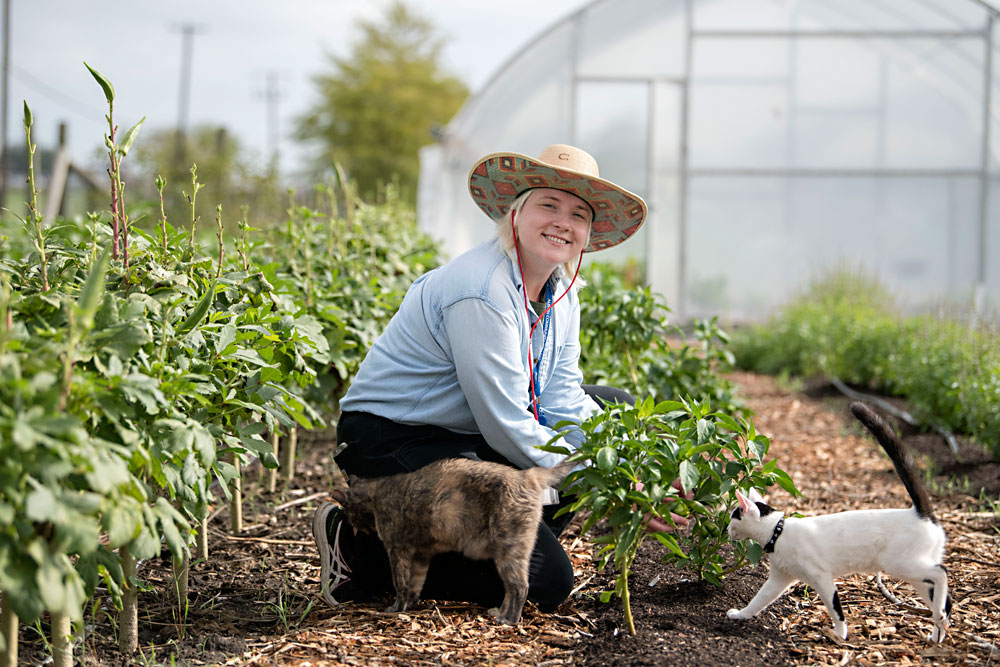 "We're going to have to use season extenders, or high tunnels, to regulate the temperatures a little more." And what are high tunnels? "Kind of like a greenhouse, but pretty low-tech. It's a structure with side walls and plastic tops that can help regulate the inside temps. In winter, it creates a heat zone so the veggies can stay a little warmer. We're building a larger one for this upcoming year." Because while this summer has been unusually hot, and there's more of that heat to come, we may have a rough winter coming. But back to hot sauce.

Rugg, already familiar with the Sriracha announcement, said, "Texas A&M's climate report from 2019 found that by 2036, we will see double the amount of 100-degree days, and 30%-50% more urban flooding than we currently experience. It's going to be harder to live in Texas in the next 15 to 50 years."

2036 seems soon! So, farming is going to have to change to some degree, like Tilton and Rugg have found.

I reached out to Joe Diffie, owner of Joe's Microgreens, not just because his greens appear on a lot of local menus, but because he only farms hydroponically. Diffie had a lot to say about the challenges farmers face, and the possible opportunities that may come to those able to capitalize on change. Diffie said, "A rapidly warming climate has drastic effects on agriculture. Droughts and heat waves have consequences, and pepper production isn't immune." 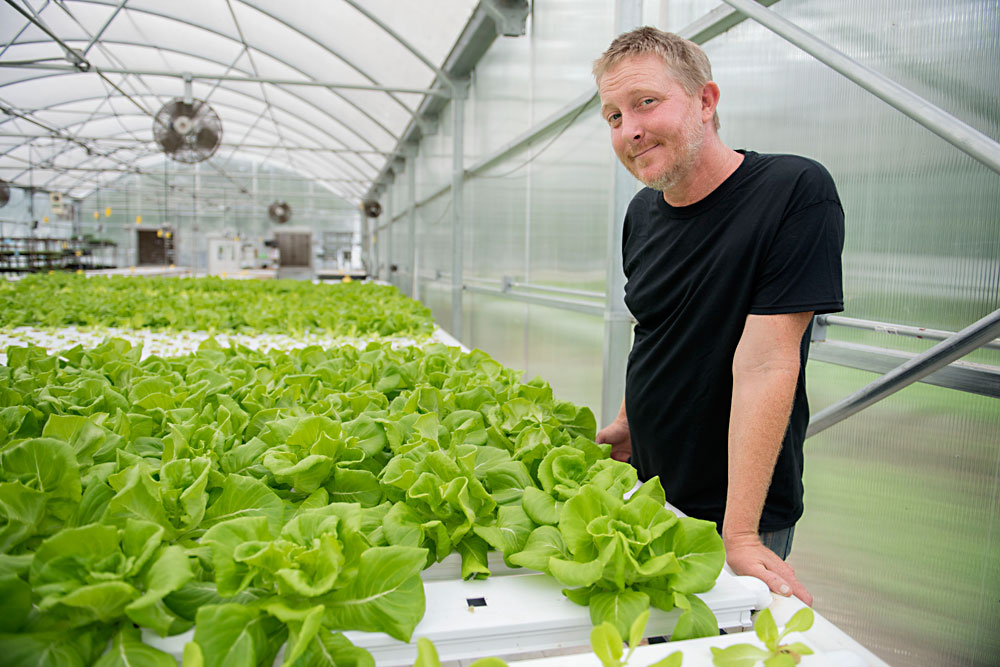 Farmers can mitigate concerns on a micro-level. Says Rugg, "We're looking to install more shade structures for the summer months, we already use drip irrigation so that can reduce our water usage, and we're working with our planting dates. It's been tricky with the freezes. We're going to have to plant earlier in the year and have a shorter veggie season, I predict."

ACC's farm only has a few rows of peppers in their market garden, and much of their summer 2022 crop didn't make it. "We had lots of tomatoes and corn and lost it all," Rugg laughs woefully. "The only thing we've been able to keep happy are eggplant, okra is a fighter, and the black-eyed and purple hulled peas have been our heat-surviving crops."

Rugg used to farm in the Rio Grande Valley, no stranger to heat. "Down there we would grow peppers and tomatoes in the fall, maybe our fall crops will change in Austin." While drought and climate change are our grim reality for the foreseeable future, that doesn't necessarily mean that we'll be blasting our palates with inhumanly hot peppers as a result. Innovations at a local level will ensure a future full of peppers and hot sauces, which should inspire a mild/medium/hot/flaming-hot sigh of relief across our spice-loving land.