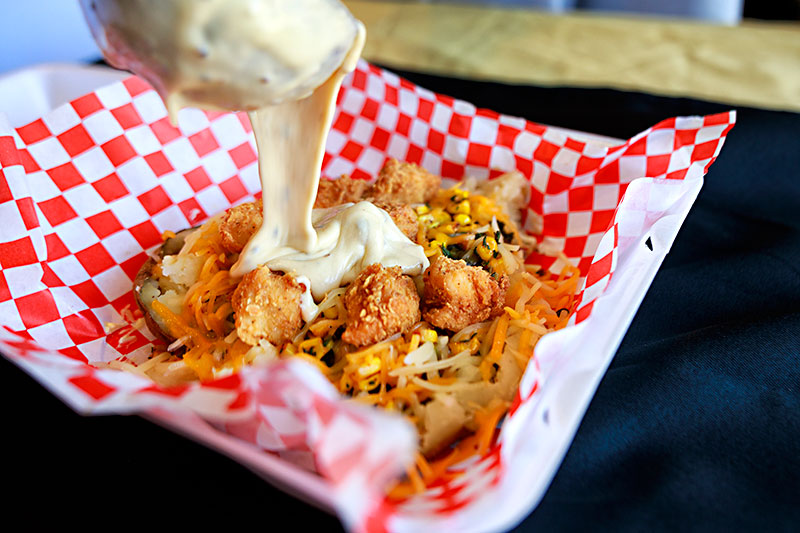 In the shadows of the Carver Museum and Cultural Center, a building that was originally Austin's first library, the intersection of Angelina and Rosewood has become a veritable cornucopia for Texas restaurateurs, from homegrown mainstays like the Soup Peddler and East Side Pies to the critically acclaimed Discada taco truck and the quickly growing San Antonio vegan chicken sandwich brand Project Pollo. But, without a doubt, the building that sees the most foot traffic from longtime Eastside locals is Anything's Baked Potato. The food truck's decadent Southern fusion cuisine has earned rave reviews and consistent clientele; its owners are now eager to expand after having proven themselves in the food truck and restaurant business.

While Anything's launched in 2019, the concept emerged a few years prior. Daniel "Skip" Thomas had been on his mother's porch, at the house off Rosewood and Salina where he was born and raised, brainstorming business ideas with Anything's co-founder Charles Lee. 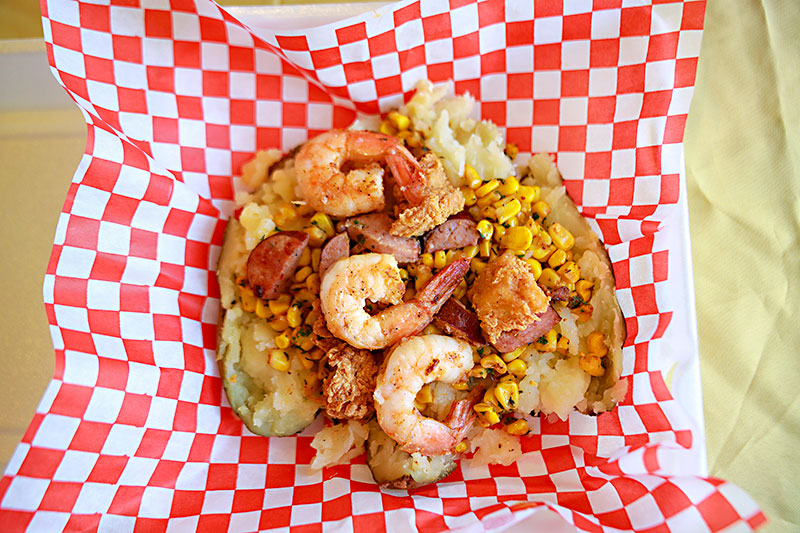 "I went to school for hospitality management and thought that if I ever started a food place, I would do something with a [stuffed] potato," recalls Thomas, who was inspired by his childhood trips to the old Spuds/Potato Club at the food court in Highland Mall (now the flagship campus for Austin Community College). "Every time I used to go to the mall with my grandma and them, I would go eat the baked potatoes. You know, certain people would eat the pizza or the burgers … I would eat the potatoes. I just liked them."

By a serendipitous twist of fate, Lee had just made a stuffed baked potato with eggs and bacon for breakfast the day before their conversation. With that, Thomas started looking for willing business partners who believed in his vision.

Thomas and Lee are cousins who both love to cook ("We've been kicking it since [we were] knee-high," says Thomas). The two men came out of LBJ and Anderson High, respectively, while the third member of Anything's tight ownership group, Baylor alum and professional athlete Curtis Jerrells, has been a family friend of theirs since middle school. Jerrells, who hails from the St. Johns neighborhood of Austin and graduated from Del Valle High School, was looking to invest in local businesses such as nightclubs or restaurants and his interest was piqued when he heard the Anything's pitch. They began developing the menu with a friend of Jerrells' who was a private chef and eventually found themselves a food truck along with some commercial space (currently used as air-conditioned seating for the food truck's customers) with deep roots in Austin. The previous business at 1326 Rosewood Ave. was a neighborhood barbershop/convenience store whose owner had a Cajun food truck outside and was open to selling the truck and subletting the property to some fellow enterprising locals. 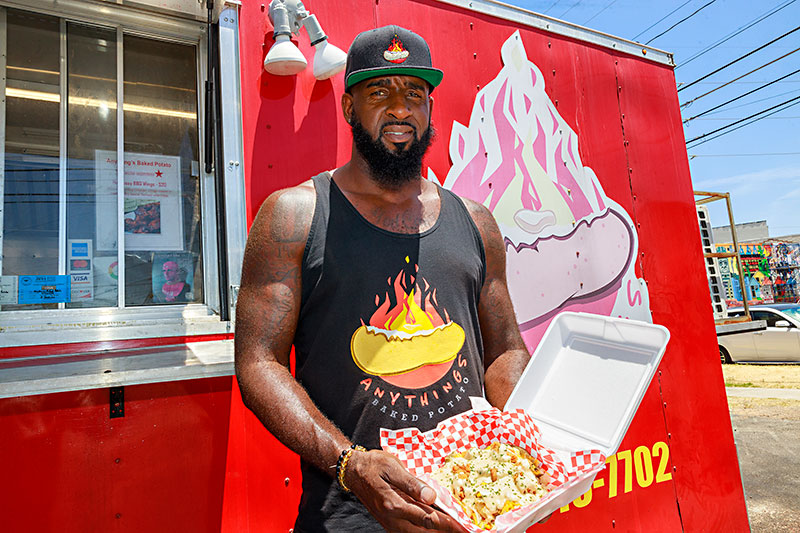 After you've had the food at Anything's, it's easy to see why they've developed such a cult following. The formula for these plates is simple, yet elegant: high-quality, gigantic baked potatoes (russet or sweet) as the canvas for a combination of toppings and sauces. You can always start with the Loaded Baked option and begin customizing from there, or you can go with a signature menu item. A local's advice, observed through many rounds of Anything's, is to "put extra shrimp and extra sauce on everything." One can imagine the now-infamous meme of Leonardo DiCaprio from Wolf of Wall Street making it rain exorbitant amounts of dollar bills for extra guacamole, but adapted to your friendly neighborhood baked potato spot.

Lee's breakfast potato lives on through the Sunny Side and Dirty Side potatoes; the former features andouille sausage, bacon, cheese, and a sunny-side up egg. The latter is the way to go – similar to how locals get Torchy's Tacos "trashy style," the Dirty Side has Cajun cream sauce atop a scrambled egg version of the Sunny Side. The truck's Cajun cream sauce is legendary, with the No. 1 Cajun-style baked potato as perhaps their bestseller, and for good reason. It's a Louisiana-style dish with a potato as the plate: shrimp, fried chicken, andouille sausage, and corn top the spud with a healthy helping (figuratively speaking) of Cajun cream sauce. Those of a more vegetarian or health-conscious mindset can instead opt for the veggie version of the dish, which features portobello mushroom with onions and bell peppers as the main fillings and is just as tasty and hearty.

The Chicken Fried Chicken (or Steak) is another slam-dunk adaptation of Southern soul, and is endorsed by Thomas as his personal favorite: "It's amazing – you can taste the greens, corn, the fried chicken, the gravy …" There's also a secret menu that includes the notorious Trill Fries, the name of which originates from an inside joke between two of the co-founders using common Texas slang popularized by Port Arthur's UGK, a portmanteau of "true" and "real." "I call Curtis 'Trill' and he calls me 'Big Trill,'" laughs Thomas. 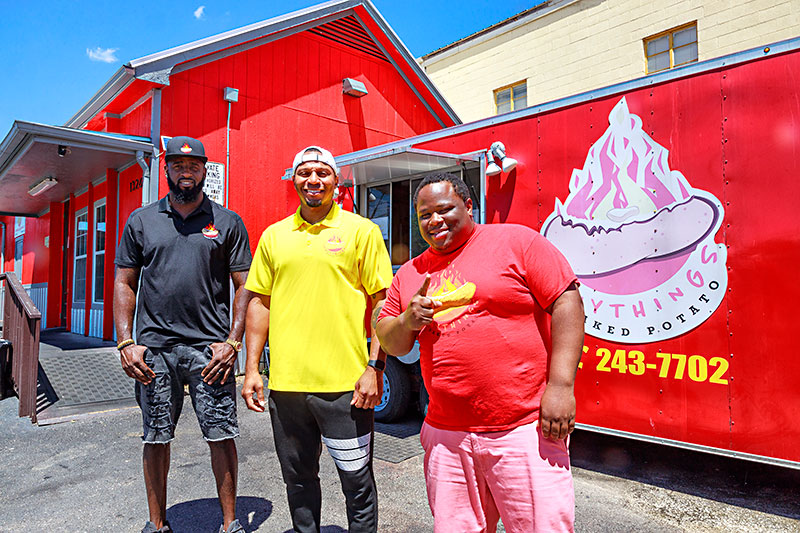 I ain't Bun B and I ain't Hank Hill, but this truck's fries are pretty dang trill. A cross between trash can fries and Southern-influenced poutine, Anything's golden Trill Fries feature the truck's signature country gravy with chicken, bacon, sausage, and cheese. Thomas says, "Anything that gravy touch is crazy." Another representation of the truck's take on Southern fusion comes courtesy of the brisket baked potato, which wears its Tex-Mex influence proudly on its sleeve with a generous helping of beans, cheese, and sour cream alongside more traditional barbecue fillings of brisket, pickles, onions, and barbecue sauce.

Perhaps the most interesting dish is the Stir Fried Veggie, which I got with mushrooms, onions, peppers, water chestnuts, snow peas, and baby corn, accompanied by the restaurant's teriyaki sauce. It was a unique and tasty take on a common Chinese takeout classic (basically using potato chunks instead of rice). They currently have a Salmon & Asparagus special available only on Thursdays, and Thomas says he wants to add even more vegan, vegetarian, and health-conscious items for the business once they have the brick-and-mortar location set.

Ownership's plans don't stop there. "We're thinking of franchising. In our third year, we know that it works. People have flown in just to try our potatoes," says Thomas. "You can basically put anything in a potato and it'll mix … that's why the brand is Anything's, because we can do anything with it. We've [currently] got the Anything's Wings, and we want to do more, like [starting] Anything's Snow Cones & Snacks." 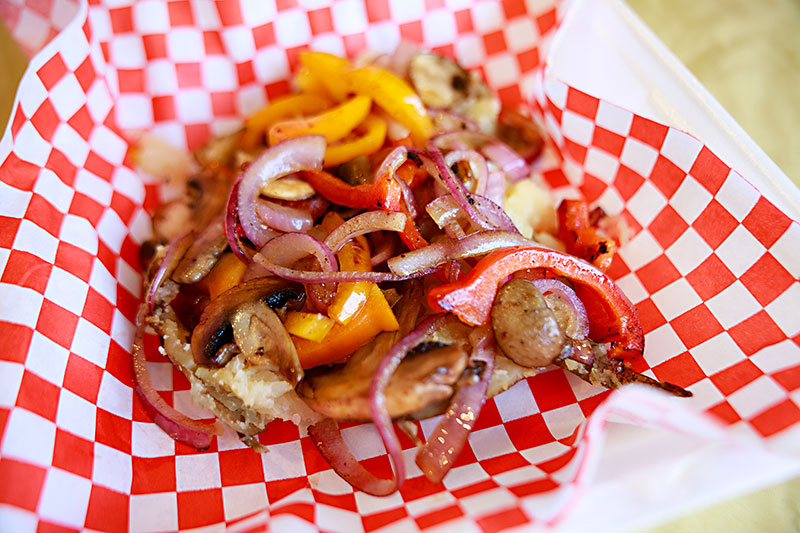 Inspired by the property's previous significance to the neighborhood as a corner store where they got ice cream and candy as kids, Thomas says he and the owners want to get the city and community involved with the area, similar to how it was when they were younger. "We'd like to do more family events and programs for kids and teachers at all the schools we went to."

The sentiment is understandable given Austin's changing demographics – especially in the rapidly gentrifying 78702 zip code the business calls home, where a 2018 neighborhood study from the University of Texas's Institute for Urban Policy Research & Analysis found that dogs outnumbered children 2-to-1 in households between East Seventh and 11th streets.

"A lot of Black business owners that used to be here, they're all just gone. There already wasn't a lot of them, and after COVID, they went to Manor, Pflugerville, Round Rock, Hutto, Elgin … so a lot of our neighborhood is really out there," says Thomas, who attended Kealing Middle School just blocks away from his business. 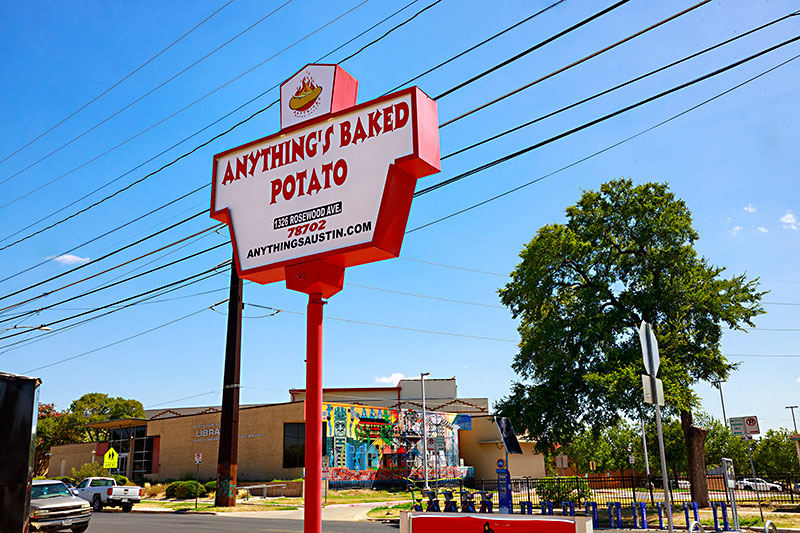 Anything's Baked Potato, across from the George Washington Carver Museum

While a local restaurant isn't going to solve gentrification-fueled displacement, worldwide inflation, or Austin's housing and affordability crisis, the shining example that homegrown local entrepreneurs such as the Anything's Baked Potato ownership group provide to their city is proof that if you have a great idea and are dedicated, you can actually make things happen if you're in the right place at the right time and are willing to grind to make it a reality. And if that's not trill, then what is? 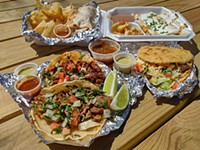 Can Mi Trailita y Mas Revitalize "Murder Corner"?
A favorite food truck sets down roots in the community with brick-and-mortar