A Brief Guide to the Yard in South Austin

Encountering the true ATX spirit in our bustling modern metrop 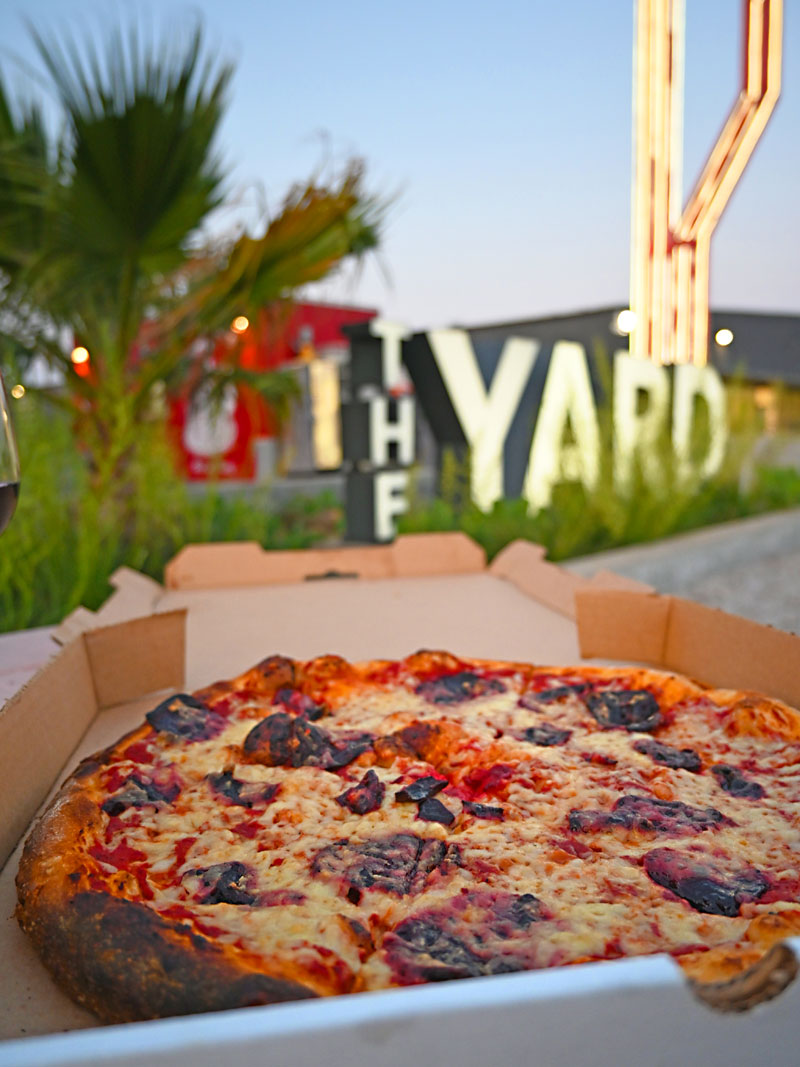 Listen: If you haven't been to the Yard on St. Elmo Road, you haven't really experienced Austin.

Sure, that's a bold assertion. But see if you don't agree by the time you've finished reading.

First, let's note the well-known habit of old-timers telling newcomers something along the lines of, "Yeah, but you don't know the real Austin – because you got here after _________ closed." Fill in the blank: Taco Flats, Raul's, Les Amis, Liberty Lunch, the Alamo's Colorado Street location, that favorite dive bar that shuttered back in the days before Al Gore invented the internet. As if the One True Austin were somehow inextricably nailed to a particular point in the vast temporal scheme of things, right? And yet, there is an argument that could be made to that effect – albeit by philosophers more educated (and more Gallifreyan) than your current reporter.

An easier argument can be made that there are places and experiences in any given era that serve to exemplify a city, to persistently embody its most glorious intentions of locally originated commerce, community, creativity, and downright fun. Look at North Loop, Manor Road, North Burnet, East Cesar Chavez, the Airport/ACC corridor, the Mueller development. Look at what they call, these days, SoCo, anchored by homegrown favorites like the Continental Club, Guero's, Magnolia Cafe, Vespaio, and Amy's Ice Creams. Those, and so many other unique neighborhoods north and south and east and west, are ablaze with born-right-here Austintatious zeitgeist. You miss out on any of them, you're not really experiencing what Austin, in its totality, means.

The same has been true of the Yard since it opened in 2016, and is even more true now. It's a curated array of local businesses just south of Ben White, at 440 E. St. Elmo, a thriving collection of diverse creative industry that continues to grow in popularity, but which we've not previously considered the, ah, the holistic impact of. Until, well – now.

At first, when you drive up to the place on a Friday afternoon – because weekends are when all the best public stuff happens – it seems like just another industrial park: a few rows of big metal warehouses and outbuildings, with some rough asphalt driveways and parking lots between the imposing structures – not unlike most such places of manufacture and storage surrounding any urban hub. Take a closer look, though, and you see how many gorgeous, original murals are improving exterior walls in this Yard; you notice some food trucks that you've probably heard raved about at a party somewhere; you see that even the concrete driveway dividers and Dumpster hiders are sculpturally enhanced and have their tops planted with rows and rows of prickly pear cacti; you realize that, hey, there's quite a lot of foot traffic going on here, sharply dressed citizens strolling between buildings as if they're out for a good time on the town. At that point you think: Well, OK, this must be a sort of glorified industrial park. 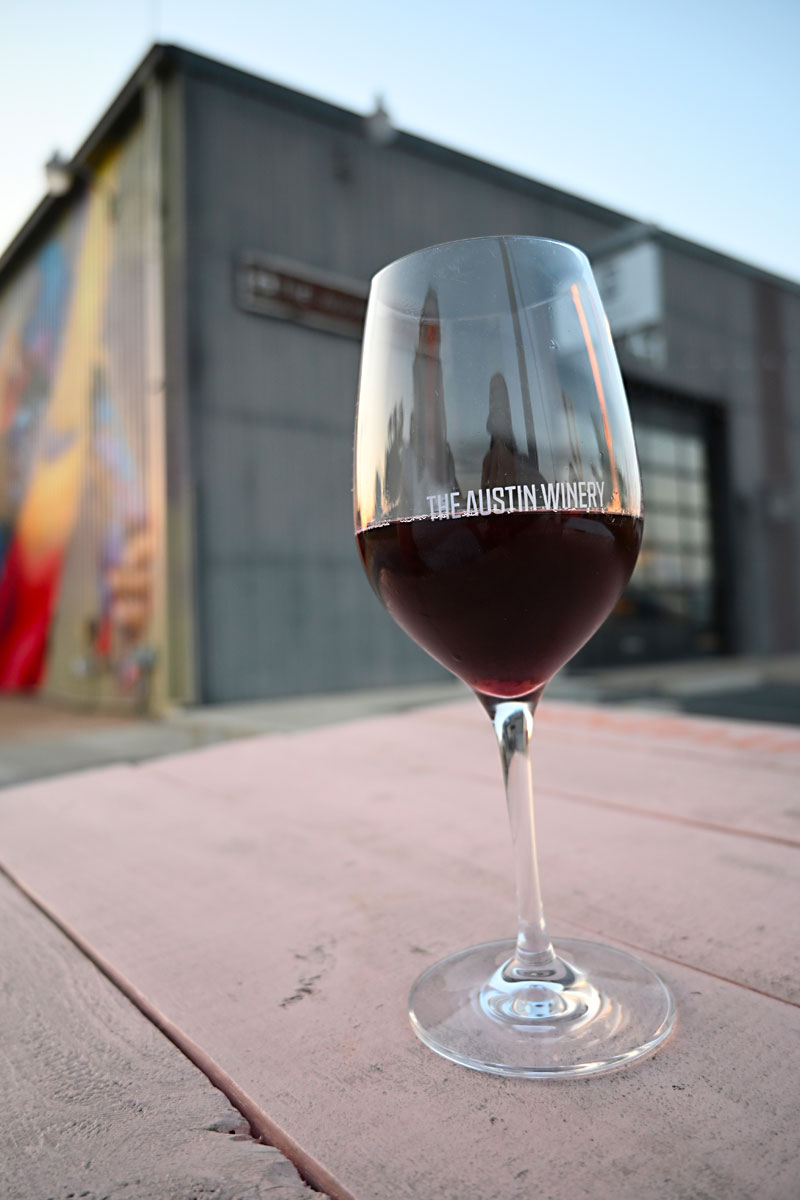 SPOILER ALERT: The real glories of the Yard are on the inside of all those buildings.

Immediately to the left of the entrance, there's the Austin Winery. This place, started by Ross McLauchlan, Matt Smith, and Cooper Anderson in 2014 and moved to the Yard in 2017, makes its own wine – its own really good wine, in varieties supported by a diversity of Texas vineyards (and only Texas vineyards) – and invites lifelong oenophiles or curious neophytes to a welcoming bar and a soaringly spacious, elegantly designed tasting room. They sell about half of their vast stock beyond this store, too – their wines are in Whole Foods and Central Market – but you're not likely to find a better place to imbibe these refreshing wares than Winery headquarters.

Next door to Austin Winery is the well-crafted caffeine yin to the alcohol yang: Spokesman Coffee. Trey Ramirez and CJ West's roastery and bar of all things arabica and robusta was one of the first businesses in place when the Yard debuted in the fall of 2016, and, besides serving as a social hub for java-craving visitors, it may be what fuels the compound's own endless industry – much as the floor-to-ceiling graffiti art by Briks throughout the cafe's interior fuels everybody's inspiration. 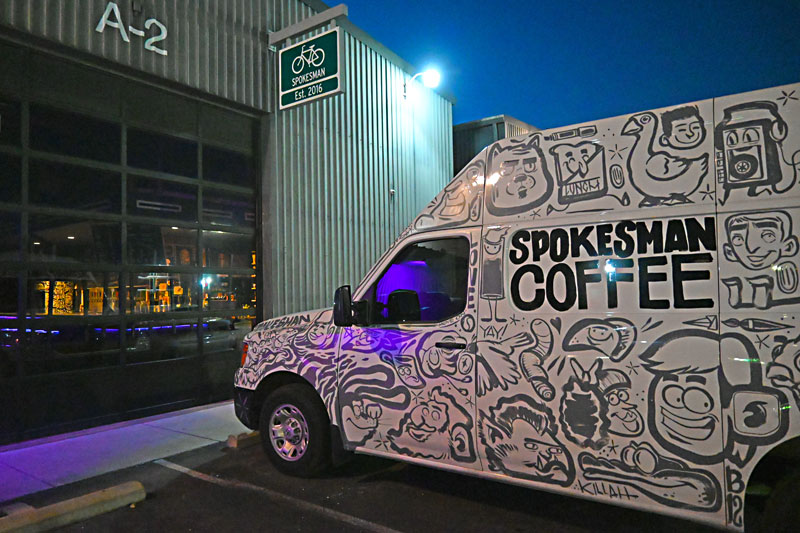 The closest food truck abetting these beverage titans is Li'l Nonna's, a tiny powerhouse of vegan pizza. Yes, even the cheese is made from plants, and do ask about their "beeteroni," because founder Rob Lordi spent a long time perfecting the stuff and they're hella proud of what it adds to a savory pie. "Austin's obviously blessed with so many vegan options," notes the Chronicle's own James Scott, "but not so many vegan pizza options. Li'l Nonna's sticks out for me as both excelling in their pizzamaking and their ability to craft a quality vegan product. And, I hate to say it, but their beeteroni? Might outpace a pepperoni slice in terms of tastiness."

Austin Cocktails' building comes next, housing the eminently refreshing RTD beverages created by Texas sisters Jill Burns and Kelly Gasink. We'll just note them this time, because the place isn't actually open to the public – although we hear they're working toward a tasting room of their own.

Then there's Texas Saké Co., another locally grown phenom, with a drinking and dining area like a sort of open-plan izakaya, although few pubs can boast a suite of such elegant booths for enjoying the rice-based spirits that are made on-site. Current toji (aka brewmaster) Brad Saliga has been working the stills for three years now, conjuring superlative sake expressions for founders Adam Blumenshein, Tim Klatt, and Nathan Klatt – with bar manager Justin Kizzart as your affable host and beverage ambassador. Texas Saké's dedicated food trailer is Michael Carranza's Texas Sushiko – and you can guess that a man who spent years performing precision butchery for the seafood sourcers of Minimoto and working the Salty Cargo biz with chef Johnny Gocong is offering nothing but excellence. But – innovation! – he's serving it up in taco-form handrolls, and – aspiration! – the joint will eventually become a permanent fixture inside the Texas Saké space. 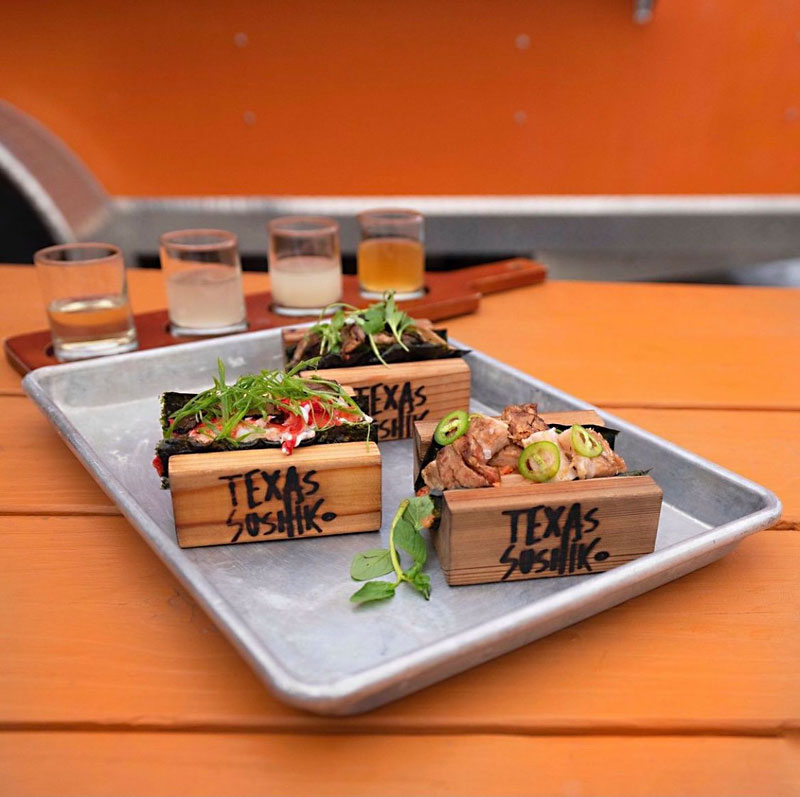 Continuing your northward trek, the stylish sanctum of sake is followed by adjacent Blue Norther Hard Seltzer. This is another example of locally canned goodness, created by father-and-son duo Austin T. and Austin M. Pittman, with their liquid assets "named for the fast-moving cold front that can blow through Texas." These seltzers are brewed in Austin, "using only natural ingredients to bring bold flavors with zero aftertaste." Those flavors, currently: wild blackberry, agave lime, and prickly pear – and if that's got your sensory apparatus piqued, you'll be glad to know that Blue Norther's warehouse in the Yard does have a dedicated tasting room inside. 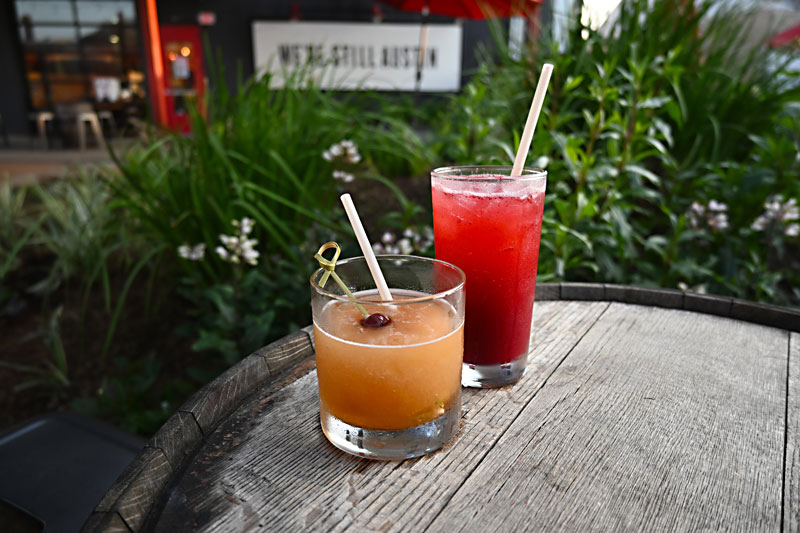 Cocktails in the courtyard at Still Austin

Next up, F&B-wise, is Still Austin, one of the first whiskey distilleries in the city since Prohibition ended, purveyed by Chris Seals and company, serving up and selling a variety of spirits in their Insta-worthy showroom and bar. We reported on these guys at length when they were first starting out, but by now everybody knows how impressive their whiskeys and gins are, with collectors buying up special editions before they can even hit a shelf. Still Austin's got a lovely sit-and-chill courtyard, too, but the food truck there is temporarily empty as they audition replacements for former occupant the Bearded Bakery. "Chef Wes Dills wanted to pursue other opportunities," jefe Seals told us recently, "and we're trying out different concepts, still looking for the perfect fit."

And finally, anchoring that restaurant row of buildings along the west, there's St. Elmo Brewing, called out by the Chronicle's Eric Puga in his "Top 25 Austin Breweries of 2021" (Daily Food, Oct. 12, 2021) as offering "the best on-style beer menu in all of Austin." It doesn't hurt that their dedicated food trailer is Spicy Boys, dishing out a plethora of peppery chicken tastebombs that can require a good dousing of, say, St. Elmo's classic Kölsch-style Carl. 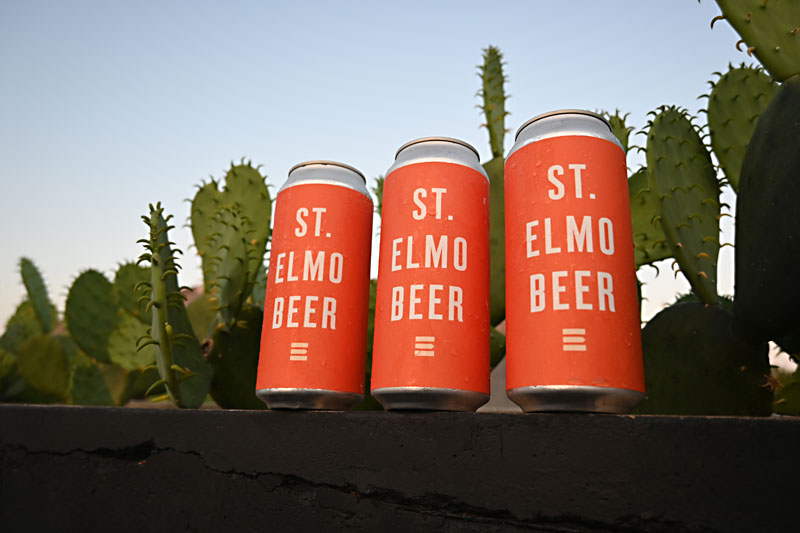 And all these places? They collaborate. In addition to the monthly "Walkabouts," where a Saturday will draw happy crowds with themed food and drink specials and barista/chef team-ups and live music, there's often some good ol' neighborly action going on. Like when Spokesman provides a special roast for St. Elmo to incorporate in one of its funkier brews; or the Austin Winery offers used barrels for Still Austin to age some of its whiskeys in; or any of these places get their promotional screenprinting done by Raw Paw on the other side of the Yard; or those same Raw Paw partners partake of the high-energy fitness training at nearby MADabolic; or –

Ah, right. While this is the Food section, and we've already glossed what's most relevant here – we also have closer looks at Austin Winery, Spokesman Coffee, and Texas Saké Co. as online extras – let's not forget the other tenants of this more-than-just-industrial park (see below).

Some are open to the public, too, but all are engaged in creative production of one kind or another. Just a glimpse should drive home the argument that the Yard is so rich in arts-centered, community-oriented, local entrepreneurial spirit that, if you haven't been there yet, you haven't fully experienced Austin. 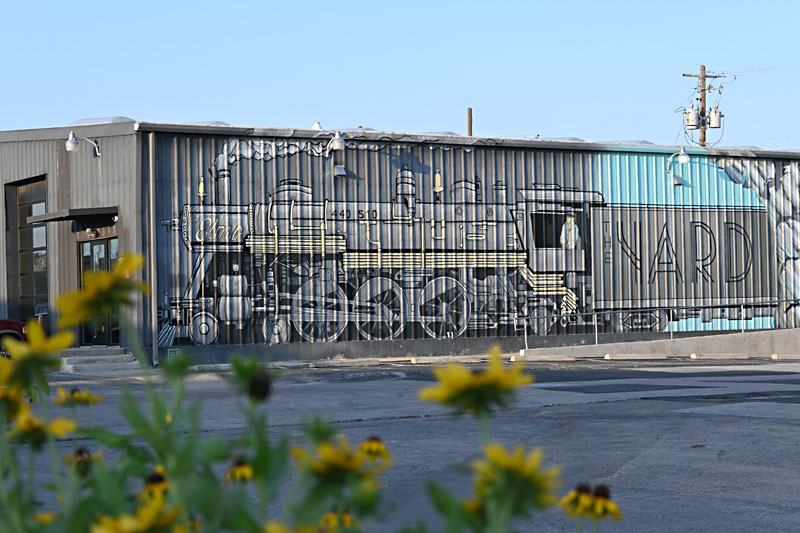 More at the Yard


Wooly's Beach Legit beach volleyball courts in the heart of Austin? Yes! And Wooly's is also home to the Texas Volleyball Tour, hosting tournaments on weekends and league play during the week, as well as a variety of classes for adults.

Oak & Lotus Yoga studio and artisan market, offering both flow and yin styles of yoga, with regular classes in person or via Zoom, from the folks responsible for the goat yoga out at Jester King.

Raw Paw We profiled this crew of young movers and shakers in 2014; now they're established as a creative agency, screenprinting ethically made clothing and goods for artists, businesses, and (eternal dream champions) themselves.

ICON Technology You've heard of Austin's sensational House Zero? That's by Jason Ballard and his ICON cohort, who are building the first 3D-printed homes in the U.S.

Drophouse Industrial and residential design is what drives this group. Comedor, Dai Due, the Arrive Hotel, and the Yeti corporate headquarters, for instance: You think they look good? Drophouse is why.

Gathered Foods Creating "craveworthy plant-based foods for everyone, from vegan to omnivore and everybody in between," with products available across the globe.

Subvrsive This gang of pros creates immersive narratives and media engagement through the newest technologies, including augmented and virtual reality.

Tesla You may have heard of it.