Osome Serves Its Sushi Right There in Your Home 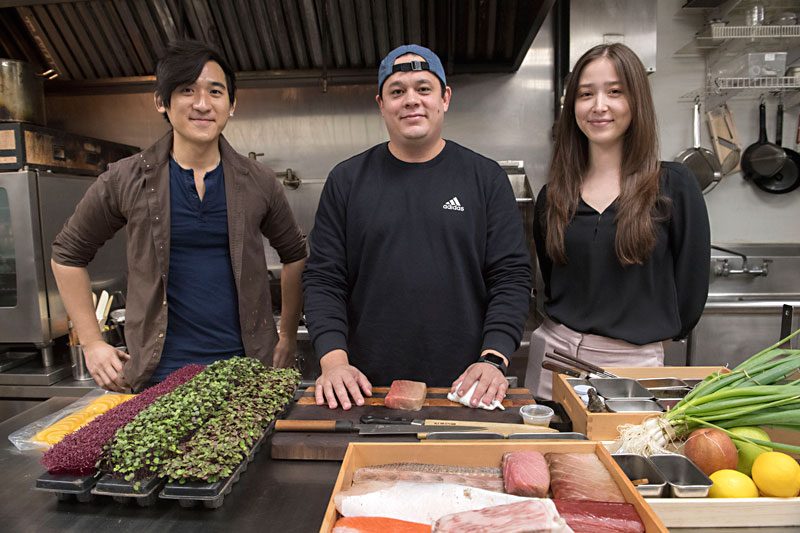 A fish doesn't need a bicycle, of course, but especially not when the crew of Osome will provide expertly chilled transportation in a Subaru Legacy.

The fish we're talking about – the carefully sourced saku blocks of various kinds, accompanied by traditional embellishments and beverages – is what's served by the sushi masters of Osome, an increasingly popular Austin company run by John Gocong, Willie Tan-Ung, and Samantha Schofield.

“A lot of times, when somebody tells you to ‘make something nice,’ you manipulate it until it’s nice. With sushi, you take those standards out: You touch it less, you cut it less.” – Chef John Gocong

It's no secret that dining on fresh-right-there sushi in public places has been one of the most missed pleasures of Our Pandemic Times, and having a team of talents prepare it and serve it to you in your own home is one way around that problem. But the concept alone isn't fully responsible for Osome's ascendancy. It's also that word gets around. It's also that head honcho and itamae Gocong has the experience and local savvy to make sure each event unfolds (and slices and arranges and pours) successfully.

"I've been doing sushi for 17 years," says Gocong. "I'm originally from California, and I did sushi all throughout the state. I'm one of the people who got lucky enough to meet Katsu Hanamure, who was my mentor. He got me into understanding what a more realistic Japanese setting was – of getting into this level of food as a career – he introduced me to that at a young age."

So, an apprenticeship. Sort of like, what's the current parlance, a Jedi master and his padawan?

Gocong smiles. "I didn't come from the type of household where we went to nice places to eat," he says, "and Katsu-san took me through my first couple of stages of, like, 'We can go to a nice restaurant and you can put all these sushi chefs up against what you're currently doing, or you can enjoy it for what they're doing, and you can also look at the elevation of food from restaurant to restaurant.' He took me through all the highs and lows that people would otherwise spend years going through, or that you'd spend just dining. And a lot of cooks lack that, in general – because a lot of cooks don't tend to make the kind of money you'd need to dine in all those nice places."

In Austin, one of the nicest places to eat sushi – the one that's internationally renowned – is Tyson Cole's Uchi. And that's where Gocong began his local journey.

"Katsu-san told me I needed to go somewhere new," says the thirtysomething chef. "He told me there was an opportunity at Uchi and Uchiko, and he recommended me for the position. They were sourcing out of state, and they staged me and then made me an offer." 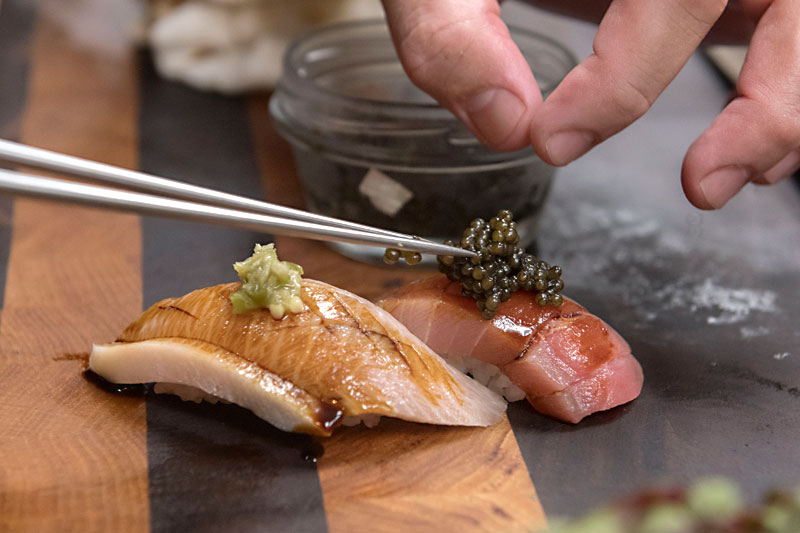 Gocong worked at Uchi and Uchiko for seven years, chefing, managing, honing his skills even further. After that, "I broke off and started doing other things in the city." One of those other things was the still-lamented She's Not Here bastion of island-inspired eclecticism Downtown. Another, as COVID began its assault on our daily lives, was his work with Austin Shift Meal. "We did the Family Meal stuff with Rock & Rolls Sushi in Cedar Park," notes Gocong. "We pushed out donation meals at the start of the pandemic, doing around 7,200 meals in two months."

Then, leveraging the commissary space they'd secured in Hana World Market, Gocong and former partner Michael Carranza started a Hawaiian-inflected eatery, Salty Cargo, within that Asian grocery store. That concept has now been shelved – temporarily, insists chef Willie Tan-Ung – as Osome's business has taken off like, well, perhaps like a particularly adept flying fish. Their sushi-on-the-spot experiences have popped up in Driftwood and at the Civil Goat coffee roasters in West Austin; your current reporter enjoyed Osome fare at November's Fork Cancer fundraiser at Fair Market; the team recently took over Antone's upstairs for three nights running. And of course there are all those private home bookings. (That home sushi experience can be booked online at osomeatx.com.) "Yeah," says Gocong, "we can always use more business, but we're doing pretty well."

And that success can be ascribed to two things. The fish – "We have people that buy for us in Japan, who ship through purveyors like Minimoto or IMP," says Gocong. "We use a handful of other places throughout the world, too, like our Big Glory Bay salmon direct from New Zealand, and we get some stuff from Australia." – and the philosophy.

"The sushi chef's job, traditionally, is to take beautiful things from the ocean and maintain the integrity until you can get it to a plate," says Gocong. "It's less about changing the product to have something different at the end, and it takes time to become good at that. A lot of times, when somebody tells you to 'make something nice,' you manipulate it until it's nice. With sushi, you take those standards out: You touch it less, you cut it less. You move it less. You hang it in a certain direction, so gravity pulls the blood down, away from the clean flesh. All those things that you have to learn, because it's not necessarily common sense. And, when that's what you're bringing into somebody's home, what has to match that bounty? What do you have to hone just as much? Recognizing that you're there to offer the experience – and that's shown through the hospitality. That effort needs to be felt, but not overdone."

We suspect that, with Osome, that's pretty much a given.