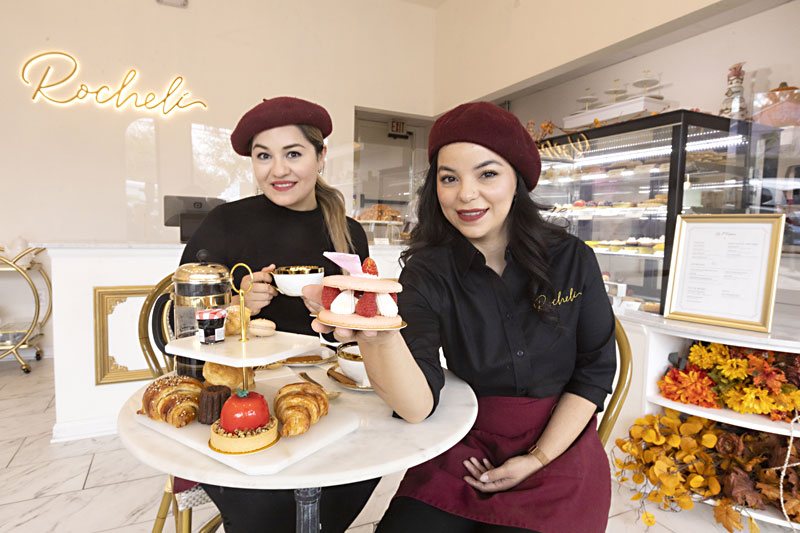 What could possibly be more lavishly French than spinning the sugary aesthetics of Marie Antoinette into the understated chic of Coco Chanel to create an array of luxe Sunday morning pastries? Honestly, not much.

But there's also not much more that is necessary. When opening their bakery in East Austin, Nelly and Linda Garcia knew that the secret to sought-after luxury was that it only takes a sprinkle of imaginative indulgence to create a cultural phenomenon. So, instead of simple croissants, eclairs, and Napoleon pastries, the two sisters baked the idea of Old World elegance, pre-war tearooms, and romantic rendezvous into the ambience at Rocheli Patisserie.

"I think the goal is to be the Chanel of the patisserie world," confides Linda, who says that her and her sister's preferred indulgence is a voluminous rose and raspberry ispahan macaron paired with a flute of bubbles. "So it's everyday in the sense that you're welcome to come every day, but I think we are striving to be that luxury cafe."

While Coco Chanel made her name by offering women an escape from the ordinary through understated splendor, Rocheli takes the idea of inhabiting the elite echelons of society back a few centuries.

Rococo extravagance tumbles out of the neighborhood patisserie. Each time the glass door swings on its hinges, classic French melodies drift over the threshold that leads into a pastel-colored interior glinting with gold accents and crowned by a pastry display case that is itself an oeuvre d'art.

Rocheli Patisserie is a family affair. The Garcia sisters' mother, Rosa Nelly Caballero, is a chef who always dreamed of owning her own cafe. The dream was not realized for years, but Rosa kept the hope alive by creating the name Rocheli decades prior to having a storefront. "'Ro' is for Rosa for me and my mom. The 'Che' is for my brother, Checo, which is the same name as my dad as well. And then the 'Li' for Linda," Nelly explains. "So my mom just put all the initials of the family together, and she loved the name."

With a professional chef for a mother and a name already preselected, Nelly grew up with the idea of having a bakery in the family well-established, but it was never something either she or Linda actually considered doing for a living until it happened by accident.

There’s no denying the impact, the artistry, of the family members’ combined talents.

While dreaming of a career as a writer, Nelly began taking baking and cake decorating classes "just for fun." As a child of the Internet Age, she naturally began posting her creations online, and it wasn't long before Nelly began receiving unsolicited online orders. At first, she was giving away her cakes, but she quickly realized that she could transform her hobby into a business. Not long after this epiphany, her sister Linda joined the team, followed by her mom.

"All of us can do everything, but I think we specialize in what we're good at," Nelly says on a recent Tuesday evening at their shop in East Austin, off Chicon Street. Nelly says she's the production taskmaster equipped to fulfill even the largest holiday order, while her mother is the central recipe developer. She credits her sister Linda with the perfect execution of the Rocheli aesthetic. Scroll through the bakery's Instagram feed – image after image of the theatrical buttressing of layers of colored fondant into edible sculpture – and there's no denying the impact, the artistry, of their combined talents. From this outsider's vantage point, at least, it's clear that the family from Monterrey, Mexico, is exquisitely counterbalanced to create intricate French pastry at scale. 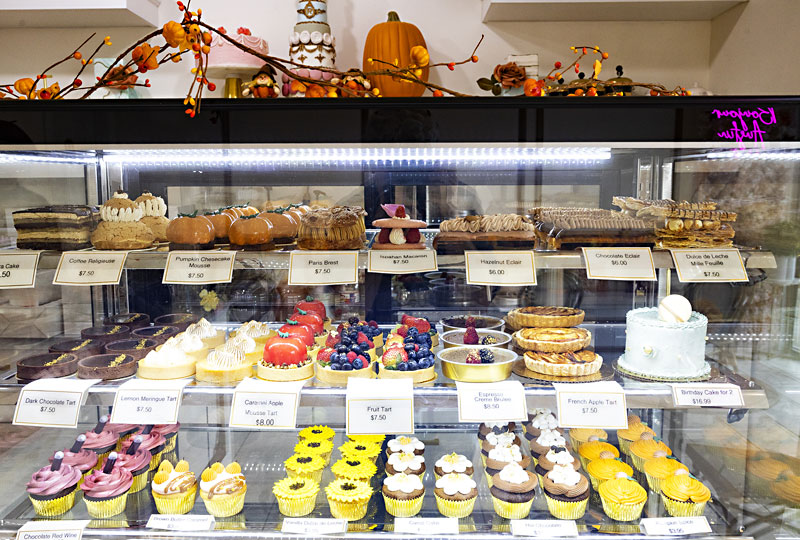 Sitting at an intimate table laden with pastries, the two sisters discuss the textural merits of the nut to wheat flour ratios in a macaron and banter back and forth about how to stitch together the zeitgeist of the winter holidays using the flavors matcha and vanilla cake. They decide the green tinge of the Japanese tea works as a nod to seasonal greenery. Throughout the conversation, kitchen staff tinker with a tray of cupcakes in various stages of undress and a sampling of frosting recipes supplied by mom Rosa.

French viennoiserie is a challenging art. But the Garcia sisters are no strangers to hard work. The dream of taking Rocheli from an online cake business to a brick-and-mortar French bakery has long been in the works. For years the duo searched for a storefront, and finally in 2020, after months of navigating the city's permitting bureaucracy, they were successful – only to have the world come to a standstill.

"I remember this was March 8, before the pandemic, that we got the permits to begin. And then, like two days later, everything shut down," says Nelly.

That rocky start was only the beginning. Nelly added that as things finally began coming together this year and orders began arriving for the new grand opening date in early 2021, so too arrived the snowpocalypse. Once again, the sisters had to scrap their grand opening plans and weather another storm. Finally, at the end of February 2021, Rocheli opened its doors.

While both Nelly and Linda now laugh at the hurdles they had to surmount to open their dream cafe, they acknowledge that their success today is directly attributable to the outpouring of support from pastry lovers – a passion that attracts people from around the world.

After several trips to the shop, it is clear that on any given day there is an air of a 20th century European cafe that, from the outside, seems rather out of place in Austin. An array of languages creates the warm hum that pervades the space, inviting clients to sit down. German, Russian, French, Vietnamese, and English all trip over each other as towers of precisely cut tea sandwiches on tiered serving dishes arrive at tables for afternoon tea.

Naturally, Americans frequent the cafe and enjoy the sweet treats from family recipes, but there are also many regular French customers who Nelly says come to savor the tips and tricks that they learned from French chefs. The Rocheli croissant with its fruity glaze is a prime example of the bakery's French flair. "It was a French chef who taught us, and he said, 'This is the way we used to have it as kids in France,'" Nelly explains.

Even the most seasoned sugar aficionados will smile at the ostentatious altar to pastry that the Garcia sisters have built. The gaudy macarons with their festive themes are only an indication of the heights to which this whipped aesthetic climbs here. At Rocheli, extravagance is everyday; sumptuousness, mere routine. Carefully stacked layers of chiffon meringue leisurely lie atop colorful tarts. Rows of uniform pedestals support tiers of croissants whose twisted shapes echo the movements of the baker's hand that carefully formed them. Glance over at the special selection of macarons for dogs, and suddenly Instaworthy dreams come true.

While Rocheli is certainly not an everyday affair, it is an experience for everyone. Whether it's crème brûlée, titillating conversation, or a humble cupcake, come seeking something out of the ordinary. Of course, come as you are, but when you leave, you will not be as you were. You'll feel, well, chic.

A version of this article appeared in print on December 10, 2021 with the headline: Let Them Eat Cake