The Texas Hemp Harvest Festival is upon us 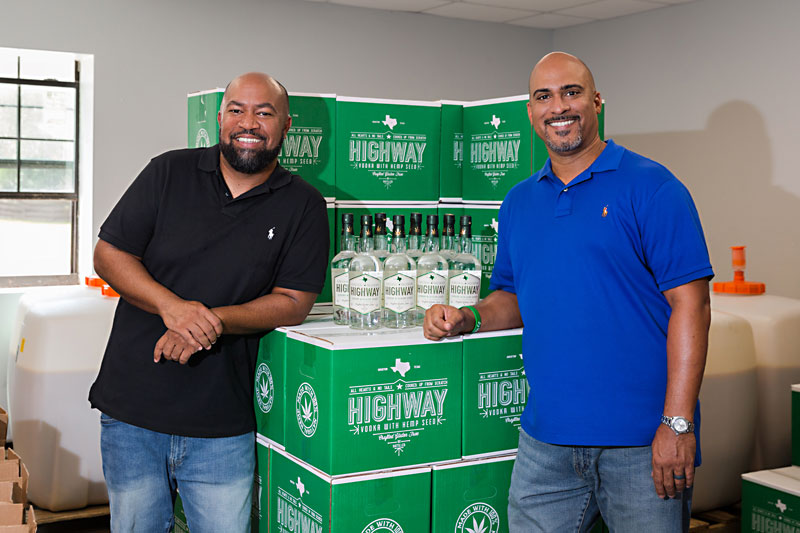 The first annual Texas Hemp Harvest Festival aims to connect people from all sectors of the rapidly growing cannabis industry to celebrate the hemp plant. Two of the fest's featured cannabusinesses share a dedication to preserving the inherent goodness of hemp in their products – just the way nature intended.

Greg Autry – founder/owner of Sweet Sensi CBD, title sponsor of the festival – boasts 25 years of cannabis experience, and he puts every bit of that to use developing and maintaining high-quality products while helping others gain a footing in the competitive field. He said, "For my farmers, for myself, even for our competition, it's hard to advertise. On social media platforms everywhere they still have us pretty much banned, and we can't say what we want to say, and we can't say all the good things about this plant. The point [of this festival] is to have a platform for everyone – everyone in the hemp and cannabis industry, even the ancillary parts and the public – to show what we can do, what we've done, what we're going to do, and to celebrate our Texas harvests."

Sweet Sensi – a nod to the "old name for good bud," sensimilla – offers artisanal CBD products made in Austin, from seed to sale. They grow organic hemp, mechanically (not chemically) extract CBD naturally in small batches, and handcraft products like tinctures, lotions, candies, and more. They also ensure that all packaging is either compostable, reusable, or recyclable. "We don't make gummy bears; we're making gourmet candies," said Autry, who proudly took confectionery courses. "We believe that the quality of the whole product matters."

Autry's extensive knowledge comes from a storied journey. He started growing in 1996 when Prop 215 (aka California's Compassionate Use Act) passed, worked at different Southern California farms (including in famed Humboldt County) and eventually found himself in Amsterdam learning from people making what's now called bubble hash or ice wax. There, Autry learned the art of mechanical extractions, which is the method Sweet Sensi CBD employs, and his earned expertise landed huge cannabis contracts. He is currently consulting for more than 50 large companies and has had between 4,000-8,000 indoor plants since 2001.

Sweet Sensi's new facility just outside Austin in Lakeway has an indoor grow house where they make two different forms of hash, or mechanical extractions. "This is medicine, so [it's] about preserving the plant in its natural form and preserving the natural chemical compounds that we worked so hard to produce," said Autry. "We still don't know what all these chemical compounds do, so if we're taking them out and manipulating them and changing what terpene or cannabinoid profiles we have, then [it's] not doing justice. And you're not getting as strong of a medicine as you could. We're concentrating the plant using our hands and machinery that we build and develop ourselves. We're so careful with our extraction methods."

Sweet Sensi CBD does not use chemicals or solvents to extract CBD from their in-house hemp, instead opting to use a warm press to squeeze out the rosin. "We test before extraction, after extraction, and we test after decarboxylation. We preserve the whole plant, so if a farmer comes in and picks up a lotion, he can smell his plant in our lotion because the whole thing was made from his farm. It makes us so happy and proud when a farmer opens up a jar and says, 'It smells like home.'" 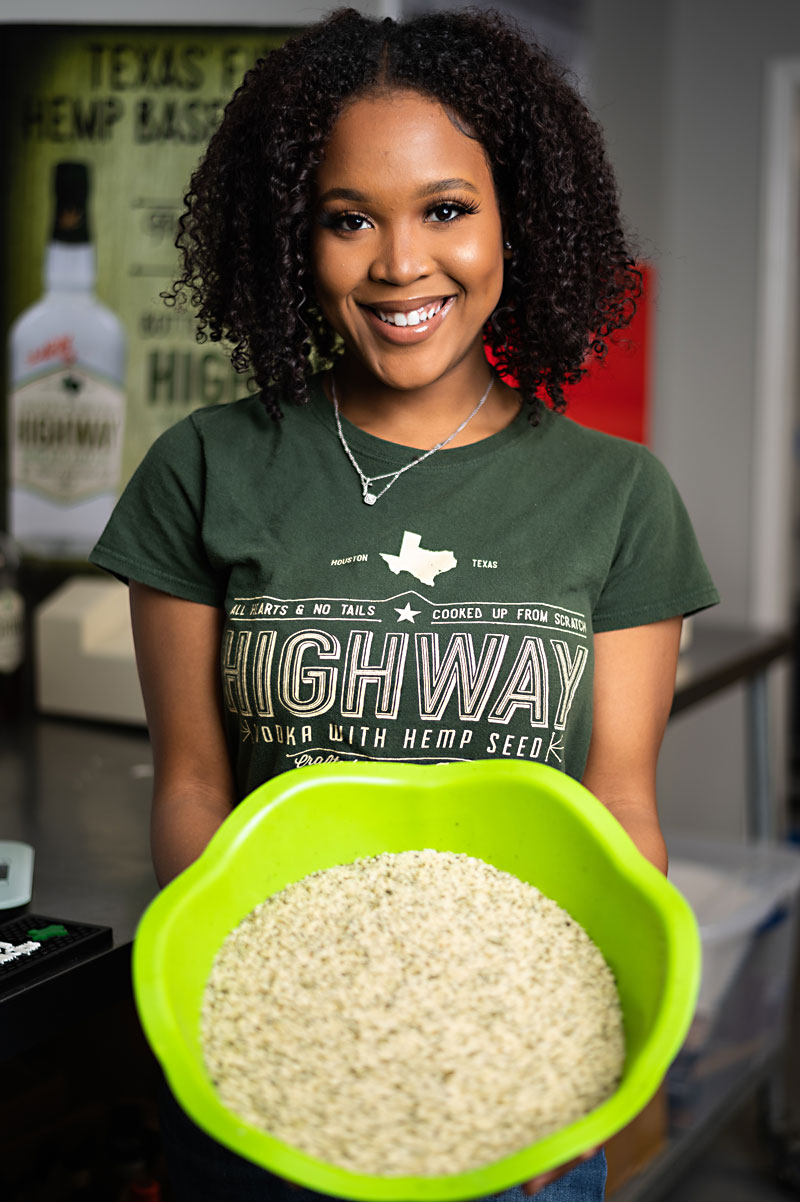 Another industry trailblazer dedicated to the preservation of hemp's inherent qualities, Highway Vodka, is also a featured vendor at the festival. The Houston-based business' origin story is a simple one of friendship and dedication to excellence: Ben Williams and his lifelong friend Wendell Robbins III spent their downtime hanging out, sometimes in the kitchen, sometimes in Robbins' horse barn, tinkering with their hobby distilling project for eight years, until they struck gold. Green gold, as it were.

The buddies managed their co-owned bar, letting friends sample as they tweaked the recipe for what would eventually become their hemp-based spirit crafted in Texas' first Black-owned distillery. Codi Fuller, Robbins' daughter, was in college when they started and now she leads the distillery. Fuller said she is proud to be one of the few, and youngest, Black female distillers in the country – a well-earned, if unexpected, title. "My dad was always in my way with a big pot on the stove asking, 'Hey can you stir this' or 'Turn this down' or 'Watch this.' On the weekends I would help them bottle the vodka or make boxes, just doing stuff around the distillery, so I was starting to learn the process without even realizing it."

Williams said it took eight years to nail down the production method. "At that time we would try to distill and ferment anything, it didn't even matter. But that first mash with hempseed and corn was the best thing we'd ever made, so we kept on." The distillation involves boiling a special strain of hulled hemp seed (selected in part for its food grade classification) with locally sourced corn and aquifer water, and adding the mixture into a fermenter. "The next game-changing thing was when we noticed our batches getting larger – our yeast was living longer because it was converting more sugars into alcohol." The duo realized that although there are no fermentable sugars in hemp, the amino acids from the hulled hemp seeds were feeding the yeast – and there's no need for conventional yeast boosters or supplements that affect flavor when you have a natural supplement.

Williams said, "It looked nasty – like olive oil with oatmeal on top – so we would rack the liquid off between the oil and the grain, and then that was producing [great] stuff. Then one day we were lazy because racking is a nasty sticky process, so we said, 'Man, let's just dump it all in there and see what happens.' Then that was the best thing we'd ever run! That big thick layer of hemp oil floating on top of the still kind of [acted] like PooPourri. That active ingredient is the essential oil and that's what keeps the stuff down – it acts as the first layer of filtration for those vapors, so you're cleaning [it] up right there."

By distilling their hemp vodka six times, the flavor complexity, viscosity, and mouthfeel really set this Texas treasure apart. Williams explains, "If you ring your glass, it has a little cling to it. It coats your palate and takes that [vodka] burn away. And it keeps a little character and sweetness from the corn sugars and the earthiness of the plant to make a nuanced spirit – as opposed to just a washed out alcohol. We're grain to glass with the plant. We're not infusing some sort of liquid at the end just to have it there for whatever's sake. It's adding advantages throughout every step of the process, all the way to the final taste."

It took two-and-a-half years to license their surprise business, despite having the luxury of building out their distillery in Robbins' barn. Williams said, "The biggest thing in terms of licensing for us was the multiple rounds of testing, sending it to these federally approved labs, making sure there was no THC. And because our application was dealing with a plant that's under such scrutiny, we would get it turned around for typos, misspellings, stuff like that. Every fix took like two months and then you have to get to the back of the line, again." When asked about the name Highway Vodka, Williams said, "I wish there was some big grand story to it, but we were sitting around doing our thing and it just came to us. We started thinking about the nuance of our product, and the cuts we make, and how we bottle the runs, and ... it took us years, ya know? Highway plays because, we believe, there is a higher level to our product and the care we put into making it. Even just the simple decision to only bottle the hearts – which is not the best financial decision to make because you can blend in the tails, they're drinkable, but that's often where you'll find the headache waiting for you."

"It's all about what hemp does for the process," he added. "Right about the mash time, that's when the plant starts to work for us." Thoughtful usage, careful methods, and public education are exactly what Highway Vodka and Sweet Sensi CBD hope to champion at the Texas Hemp Harvest Festival. Leave it to cannabis to bring like-minded people together. 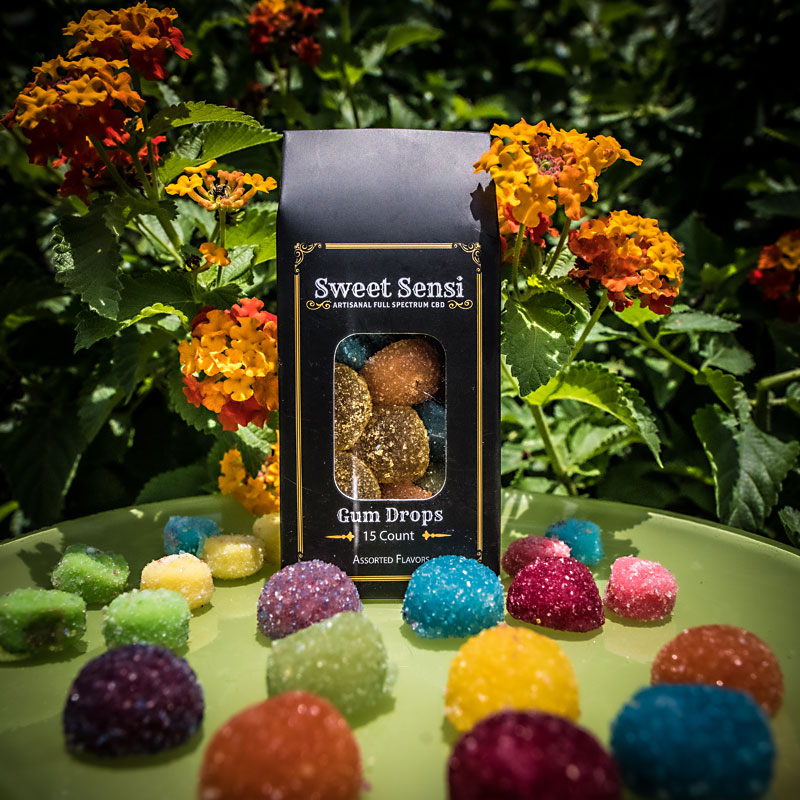 How to Attend the Texas Hemp Harvest Festival

The Texas Hemp Harvest Festival is October 23 at Carson Creek Ranch and is "produced by farmers, processors, manufacturers, and retailers to celebrate our harvest with Texas!" The schedule features two stages and 10 bands – including Gary P. Nunn and Ky-Mani Marley – plus food trucks, shopping, banking consultations, games, and a blind Battle of the Buds edibles competition. Monies from on-site raffles will be split evenly between two charities, Pride of America (helping disabled veterans) and Texas NORML, and with plenty of family-friendly outdoor space, organizers encourage lawn chairs and blankets. A negative COVID test or proof of vaccination is required for entry. For tickets see texashempharvestfestival.com.