Capsaicin creations from the backyard of Hot Sauce Fest’s dubbist 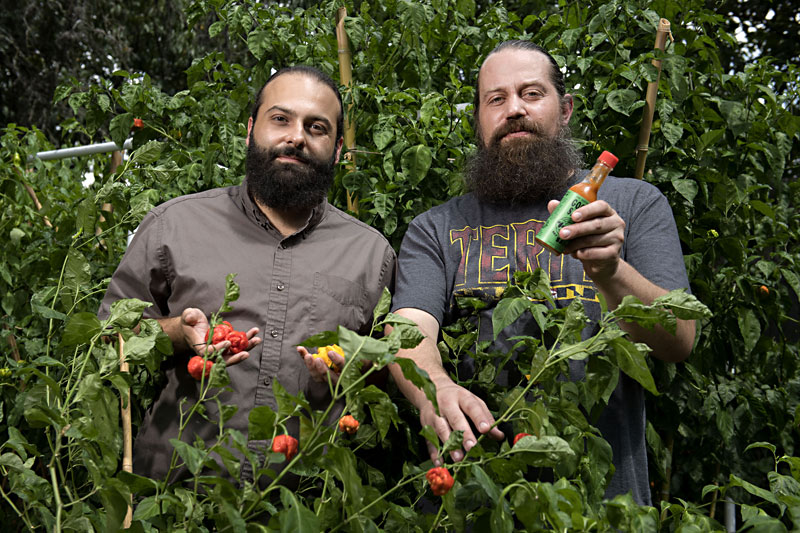 As the gates open for Sunday's Austin Chronicle Hot Sauce Festival, attendees will be greeted with deep riddims on the sound system. We booked McPullish – a veteran dub selector, producer, instrumentalist, and record maker – to DJ our opening ceremonies because the man knows how to cultivate a vibe. Coincidently, he also knows how to cultivate hot peppers.

He and fellow musichead Matt Beaman have spent the last few years on a pepper journey, growing rare chiles and using them to concoct unique sauces. This first came to my attention when I ran into Beaman at a concert and he slipped me an unlabeled bottle of hot sauce. The perfectly spicy Scotch Bonnet creation became a must-try item around my kitchen table. Soon, I spotted him at another show and inquired about getting some more. He revealed that he and McPullish, real name Carson Hoovestol, had started a boutique bottling operation called Goodburn Sauce Co.

That name speaks to an optimal level of capsaicin, the component in chile peppers that make them hot. Goodburn lands in between the weakass sauces for pedestrian taste buds and the nuclear goo you only consume as a dare. The "good burn," as Beaman puts it, is a sauce that "won't blow you out or bore you to death."

Asked to define the company’s namesake, co-owner Matt Beaman explains that a “good burn” is a sauce that “won’t blow you out or bore you to death.”

Goodburn is a humble operation – just two friends growing peppers in their backyards and cooking sauces in their kitchens – but their angle is inspired. They source seeds of diverse international peppers that aren't commercially available, cultivate the plants in living soil, and create sauces that have unique culinary applications.

Goodburn's new San Marzano Scorpion sauce comes with a "Not for use on tacos" disclaimer – try it on pizza, pasta, sandwiches, and soups instead. Its rich flavor, oriented around San Marzano tomatoes, lemon basil, and Trinidad Moruga scorpion peppers, could nicely complement Italian focaccia or Caribbean shrimp.

The sourcing, selection, and genetics of peppers are paramount to Goodburn Sauce Co. It's a challenging endeavor for Hoovestol and Beaman, who learn through trial and error how well a specific plant can grow in Texas' climate. When we meet to sample sauces, they bring me peppers. One of them's a large yellow Scotch Bonnet with bumpy skin in a bag labeled "Papa Dreadie."

Papa Dreadie, they explained, is a legend among online pepper enthusiasts. He was a white Rasta silversmith, cyclist, and musician from Amarillo who traveled the world collecting and selecting the genetics of regional pepper varieties. Hoovestol knew him through the reggae community. When he died in 2015, at age 65, a buddy acquired a pepper-filled freezer from his house.

"It's like the Jurassic Park of peppers," Hoovestol says of the freezer's contents.

From that treasure trove, Hoovestol was gifted seeds of Papa Dreadie's namesake variety, which Beaman germinated. They've continued to produce ever since.

"Part of us going on the journey of the pepper has been seeing it globally and exploring all the cultivars in Africa and the Caribbean and, obviously, South America," says Beaman.

"There's a lot of them that are not represented in the hot sauce community," adds Hoovestol. "We want to make sauces inspired by the food cultures that we're interested in, but, at the same time, put a unique Austin stamp on it."

For more info on the performers, check out austinchronicle.com/hot-sauce.