The Austin Chronicle Hot Sauce Festival Is Back, Baby!

Mask up, vax up, and join us in person for the 31st annual event

Art by Zeke Barbaro / with a nod to Lisa Kirkpatrick

Well, we made it through the hellfire and damnation of 2020 only to find ourselves leveling up in 2021. You know the situation, fellow humans on planet Earth, so let's skip to the good stuff. Last year your friendly neighborhood alt-weekly staff completely reconfigured this time-honored fest as a virtual event, and this year, as screwy viral load would have it, we had to start from scratch all over again. But now we're so very excited to present the return of our in-person Hot Sauce Festival! And of course, the whole 31-year-old shebang still benefits the Central Texas Food Bank, an amazing nonprofit that needs community support more than ever before to continue their mission.

Turns out, change can be good. This year we're shifting the party later in the day to take advantage of the "cooler" evening air, and we've downsized and moved venues. But not to just any ole venue, mind you: We've moved the festival to one of the coolest spots in town, the Far Out Lounge and Stage, and this new iteration, complete with shade trees, will be fresh and super fun. 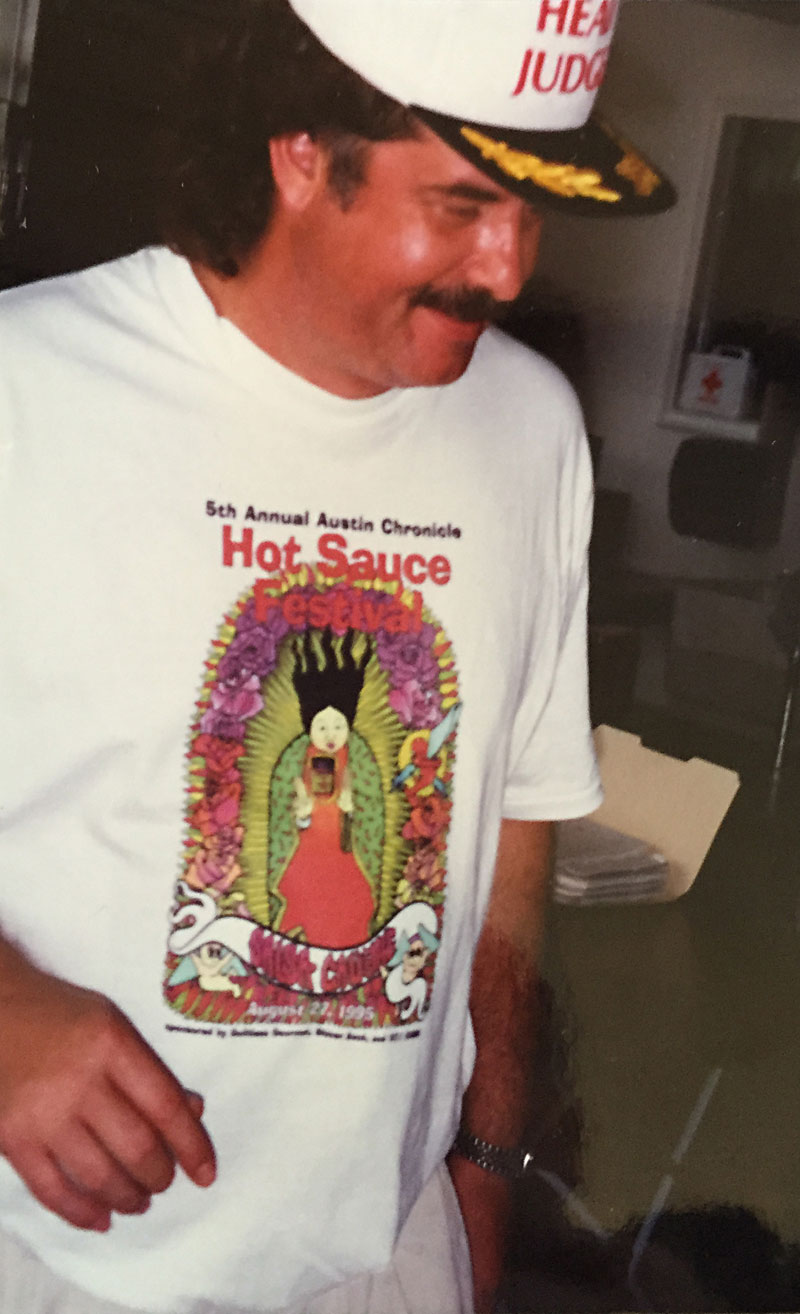 Some of you original attendees might have flashbacks from the festival's early days at Waterloo Park, Central Market (during the infamous rainstorm year), and even, believe it or not, a farmers' market locale. In the words of the man who should absolutely be the new Jeopardy! host already, LeVar Burton, you don't have to take my word for it.

Henry Alvarado started hot sauce judging at the very first fest in 1990, when it was held at the farmers' market on Burnet Road. He said there were just a handful of judges, sitting outside in the heat under a tree. "It was hot, and people would be sitting all around us, wondering how their [sauce] did. It got kind of crazy for a while there!" A few years later, Henry brought on his brother Fred Alvarado and their childhood best buddy Carlos Contreras, aka the El Paso Boys. Save for these two pandemic years, they've been judging ever since and still cherish their 61 years young friendship. (For a look back on their Hot Sauce family history, see the MM Pack's 2007 story, "The El Paso Connection.")

Growing up in El Paso means they have very specific tastes for the verdes, and usually prefer the red and special variety entries at the fest. The day before we chatted via Zoom, all the guys had been busy roasting New Mexican chiles on the grill and Carlos was making mango habanero sauce for a meat glaze and ice cream topping. ("Jesus, it is a mother-!" he laughed.) These vetted pepper experts also have big plans for rajas with asadero, and enchilada sauces. "We've got green chiles out the wazoo here, but football season is coming up, so, you know." 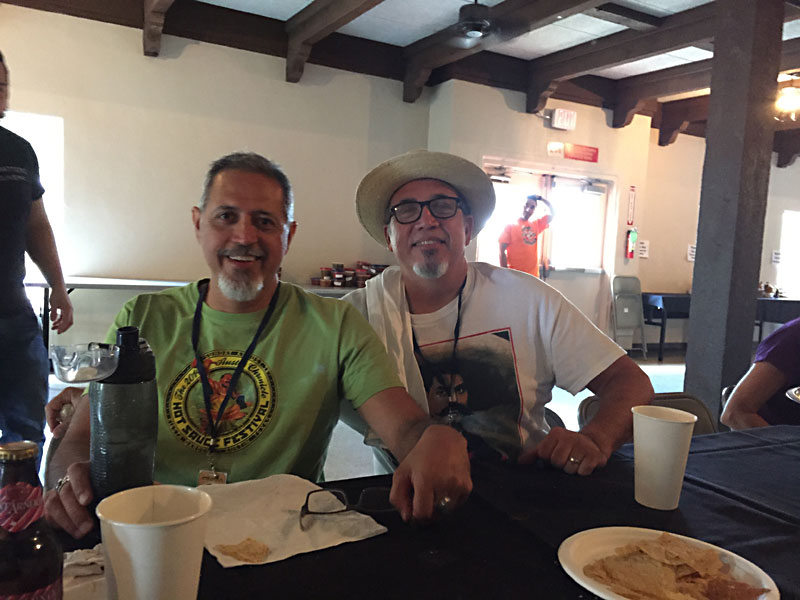 Fred and Henry judging at the 2015 Hot Sauce Festival

Henry added, "We're looking forward to this year's event and getting back out there. It'll be nice to see some of those folks we've met over the years." They also strongly recommend attendees pace themselves in the heat, with all those chiles and beer: "We learned our lesson after a few years."

The mostly outdoor Far Out was awarded "Best New Venue" in the 2019-2020 Austin Music Awards, and they scream local live music from the rooftops. Since you'll certainly be craving tunes with your capsaicin overload, we've got you covered with a five-deep bill: There's the eclectic harmonies of Ley Line's female quartet, boldly excellent hip-hop duo Geto Gala, Indoor Creature's "dreamy, jazz-inspired sound," some kickass aggro Mazzy Star vibes from Van Mary, all rounded out with the instrumental reggae of McPullish. (Check out the story behind McPullish's hot sauce company here.)

As if all that isn't enough, there will be commercial bottlers with on-site booths galore for your hot sauce sampling needs, and we're also making a grand return to the ridiculously unscripted onstage announcements of the competition winners.

This year we held judging in advance of the event and reopened the competition to restaurants in addition to commercial bottlers, and we're so glad we did. Pepperheads from all around entered their secret recipes into our standard red, green, pepper, and special variety categories. Our very own Sporty Spice, Michael Bartnett, filled in at the last minute after two judges had to drop out on the morning of the event due to safety precautions, but our solid pack of hot sauce obsessives still managed to make it through nearly 100 entries. We kept it small, vaxxed, and outdoors, thanks to our lovely hosts, the former Chronicle marketing director and current Renaissance woman Sarah Wolf and her partner Nick Goodin. The judging crew discussed the pros/cons of each sauce's heat, aroma, appearance, flavor, and originality and rated each sauce on a scale of 1-5 (to keep things simple in this time of chaos). Top secret: Post-procedurals, there may or may not have been tiny tequila shots and spontaneous swimming. Check our Judges Bio for more details on the who's who of 2021 Hot Sauce Judging, and join us at the festival as we reveal this year's coveted Hot Sauce Festival Winners roster. 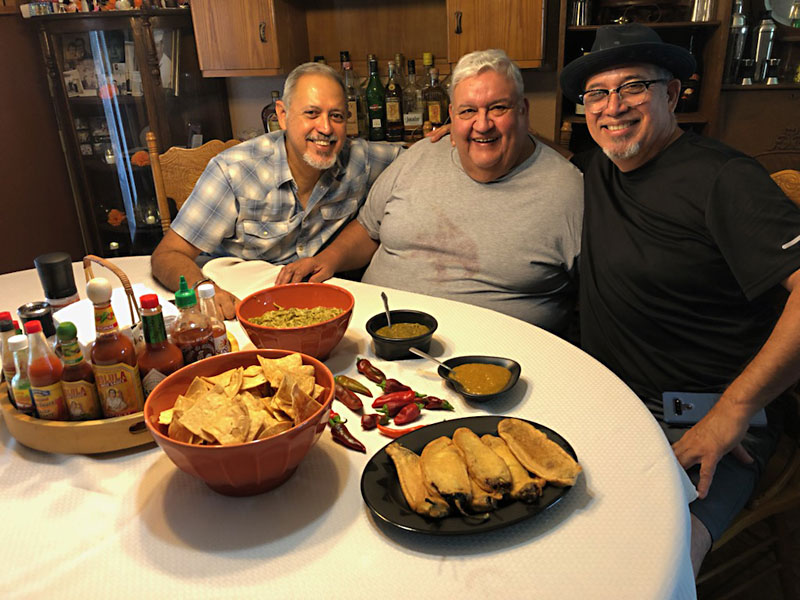 Our mighty band of festival organizers, alongside Far Out Lounge staff and vendors, are all working hard to ensure that proper precautions are taken. To keep risk minimized, and folks as safe as possible, guidelines include (significantly) reduced capacity, social distancing, health questionnaires, and masks. See the FAQs for more info on that.

Most importantly, we're once again fundraising for the critical-to-community Central Texas Food Bank! To date, with your support, this fan favorite fest has raised the supplies and funds for over 1 million meals since its birth. So as you guzzle, dance, and scorch your palate, please remember to share your good fortune with our neighbors in need by donating as much as you can to the Central Texas Food Bank, the largest hunger relief charity in the region.

When asked why it's still so special this many years later, Contreras said, "[This festival] is a unique thing that started off as a kind of contest between Austin and San Antonio, but [now it's more]. People here are gregarious, they're nice, they like to get together and do this kind of thing, and they realize it's for a really good cause."

So, brave souls, mask up and join us as we raise money to help mitigate food insecurity and celebrate all things spicy.