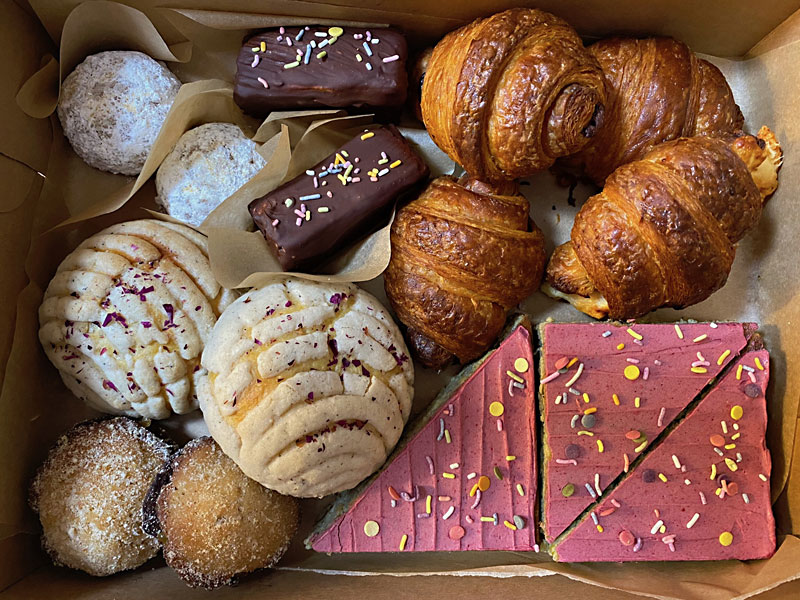 Even for a city that loves the novelty of pop-ups, the community support for Mariela Camacho's project, Comadre Panaderia, has been explosive, with recent events selling out to lines of folks hungry for her handmade panes. Comadre, or co-mother, is sort of a warm stand-in for sis or homegirl, a co-conspirator or chosen family member – it's a term of endearment, uniquely feminine, specifically Latinx. "We believe that pan (bread) is life, and the Latinx diaspora community deserves nourishing food," her fledgling business website proudly proclaims.

Camacho has been baking for 13 years, but only recently started working for herself. Camacho, originally from San Antonio, remembers getting paid $10-11 per hour at her first pastry cook job when she moved to Austin about eight years ago. "They totally abused me, and I thought it was good!" She got her chops around town working in and around fine dining, but chef culture as it stands today still doesn't impress her. She recalls, as a young cook, seeing a chef verbally abuse a busboy in front of a busy dining room. "I remember thinking like, what the fuck am I doing here and why am I not speaking up?" she said. "This is not how you treat another person!"

"On the other hand, I'm really glad I didn't go to [pastry] school. I worked in kitchens where I could speak Spanish every day with other Latinx folks, sharing energy and physical strength with other working people," she explains.

Fast forward a few years, and Camacho found herself in Seattle, experiencing for the first time the beauty of seasonal farming, sourcing, and cooking, but not feeling like her concept had enough organic support to evolve. "I had my memories of sweetbreads I grew up eating, that family had around, but wanted to make them come to life with ingredients that are close to me, and as responsibly sourced as possible in a food chain that is screwed up," Camacho says. 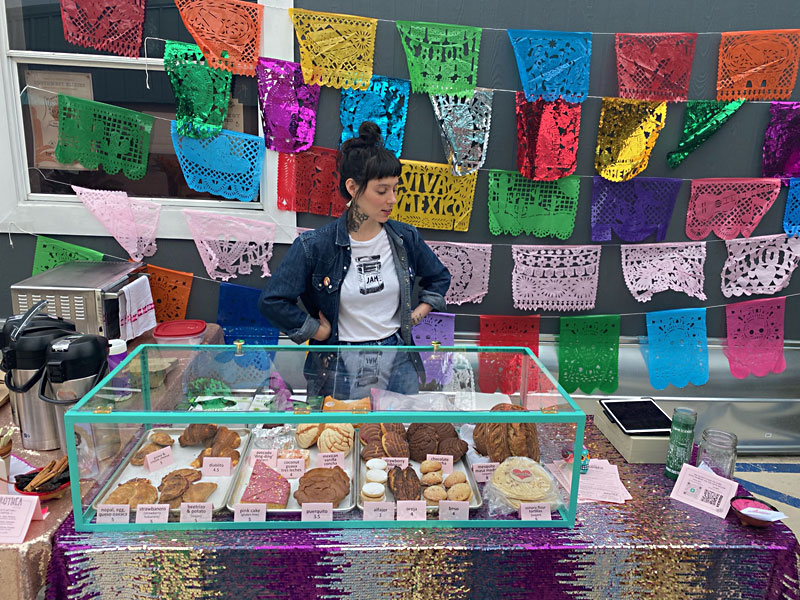 Since returning to Texas, and more recently Austin, Comadre's recent pop-ups hosted at Nixta Taqueria have cemented Camacho's desire to dig into Austin's slow food community. "I don't know if I would still be doing this really hard job of trying to run a tiny, weird business if it wasn't for the support and opportunities that I currently have through good, positive people who just believe in what I'm doing."

“Some people think it is pretentious that I want to use local ingredients, but to me it is important to use my hard earned money on the producers I think are making a difference in this world, not ones who will abuse people, animals, and land. Food is absolutely a form of rebellion, it gets you thinking, like, how do we take power back?” – Mariela Camacho

Her menu has something for everyone: There are sprinkly galletas, a delectably moist cornmeal cake with a pinker-than-traditional scratch icing, pistachio tres leches, guava-cream cheese empanadas, and conchas too pretty to eat – and the delightful goods feature local fruit, dairy, and eggs, and of course, Barton Springs Mill flours. "Their Sonoran flour really ties me back into being Mexican American," she explains, eager for an opportunity to speak about food history as impacted by colonialism, and our responsibility as Texans to engage with such conversations. "I've become fond of mesquite," she says. "We always had it growing around, but I didn't understand how beautiful and versatile of a bean it was."

Asked which item from her colorful menu is her forever staple, Camacho replied, "The sourdough loaves I'm making, honestly. One of the first things I really challenged myself with was learning to bake with sourdough, though it's not the bulk of what I sell. It's not even practical from a business standpoint, but I'm not going to let go of it. I don't care, I'm not letting go of it!" A quick snack tip from Austin's freshest chef-who-rejects-chefdom? "Grill up a slice of bread, a chunky one, with butter, make some quick salsa and put it on the bread! Whether it's tomato-based or tomatillo-based, I just love the brightness it brings to things. If you can make a really fresh one, you are set."

Camacho hopes that community interaction with Comadre will prompt people to question how they place value when it comes to small restaurants. "Some of the best food I've had is people just making food and selling it out of the trunk of their car, food trailer, or pre-orders," she says. "Food is valid on so many other levels than just being 'from a restaurant'! Besides, I don't believe in the structure of restaurants enough these days to go into a lease – it might destroy my livelihood!"

Speaking of people just making food and selling it, Camacho's mother, Imelda, deserves some credit too. Furloughed from work last year due to COVID-19, she started helping with baking, also selling her family recipe salsas at early Comadre pop-ups. "She never got credit for the food she makes, and so many traditional foods are overlooked because it's not in a setting that is 'elevated' – I don't like that word – but it was really nice for her, seeing people be like, 'Damn, this salsa is amazing!' As an older person now it's been really empowering to share food with her – it connects me to my tradition, to being Mexican American," Camacho says.

"Some people think it is pretentious that I want to use local ingredients, but to me it is important to use my hard earned money on the producers I think are making a difference in this world, not ones who will abuse people, animals, and land. Food is absolutely a form of rebellion. It gets you thinking, like, how do we take power back?" 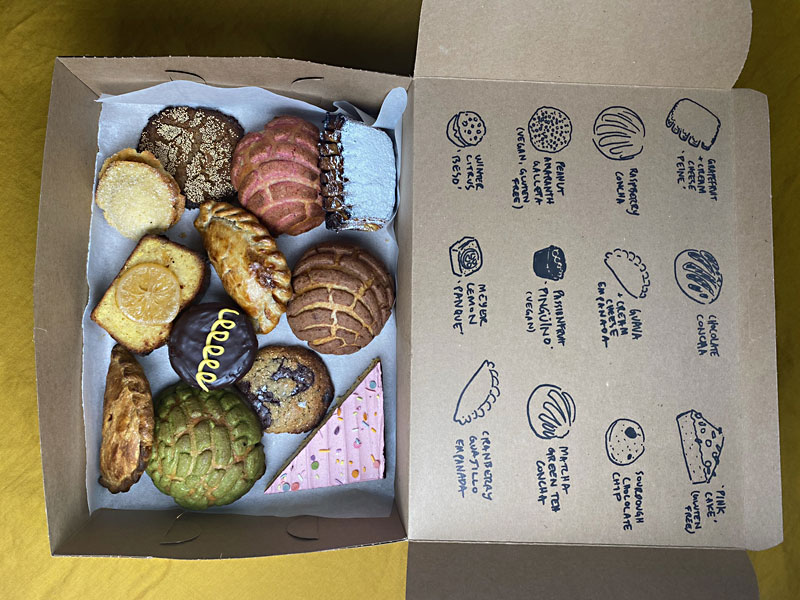 For now, Camacho enjoys the freedom to explore farmers' markets and hopes to cement more partnerships with responsible farmers who walk the walk. "Oftentimes, the maker or farmer of a product gets acclaim while the workers are left poor and tired. It feels like there's no acknowledgement of who owns the land, the cost to the land, the control of food and humans while the public eats it up at the hot new restaurant," she says.

"I think about groups and people like One Fair Wage and Ashtin Berry who have created a lot of content educating the public on how systematically planned it's been to keep restaurant workers poor and abused. The restaurant industry has always relied on the exploitation of Black and brown bodies. Tipping creates a power dynamic that consciously puts the food worker in harm's way. This not only applies to Austin, but to the whole country. My family has all worked in the food industry so I've seen these patterns over and over and over. I can't say I've seen much change, and that's why I find myself in the same position as so many others and refuse to perpetuate those cycles whether it's working for or buying from people that continue the abuse."

Looking forward, Camacho wants her model to be inspirational, to help others make a living and experiment with making money from their skills, outside of a restaurant context. "People should be able to keep their tiny projects going," she insists. "I would love a stable place, to be able to hold classes, show people how to source, get their hands on better ingredients, bring in an educational aspect, always interactive. I would really like to build that network in Austin!"

She adds, "I wanna be peoples' homegirl, peoples' friend, for this imaginary bakery to be that kind of place."

Camacho is setting up a pre-order pickup location at a local coffee shop so busy folks don’t have to wait in line – check her Instagram @comadre_panaderia for updates – but for now, catch Comadre Panaderia at Nixta Taqueria (2512 E. 12th), 8am until sold out on Saturdays. comadrepanaderia.com

A version of this article appeared in print on August 20, 2021 with the headline: Pop-Up Pan Dulce 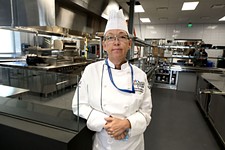