It takes two with Birdie's and Bobo's 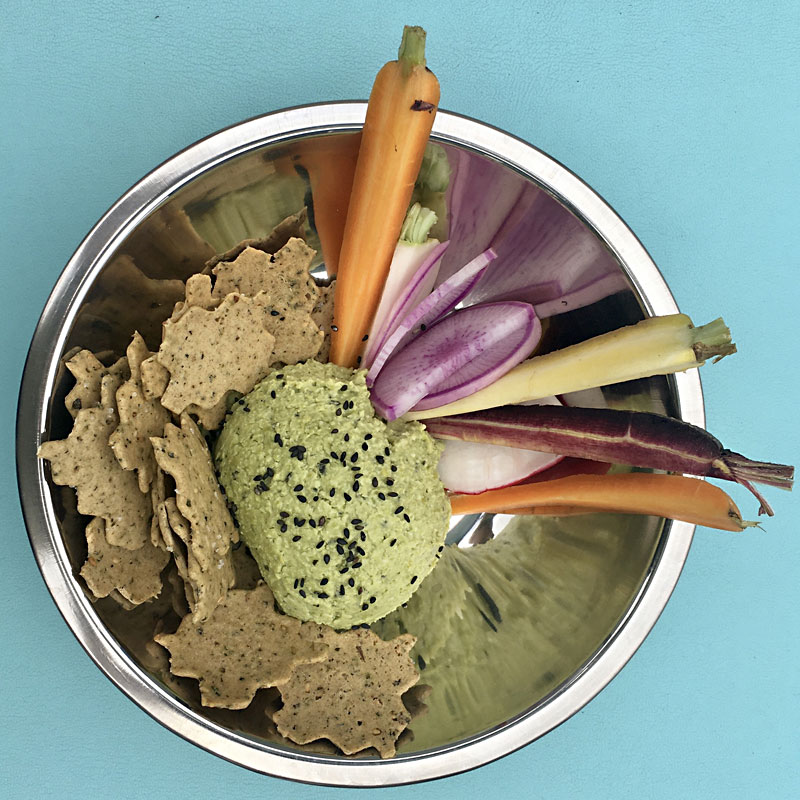 Restaurants and bars play a huge role in Austin's community and camaraderie, and two new spots hope to reignite a small bit of Austin's sense of togetherness, one pod at a time.

In the Cherrywood neighborhood just off of Airport, Bobo's Snack Bar quietly opened last week. Married couple Bethany Andrée and Karl Gilkey owned South Congress' Snack Bar, the restaurant at Austin Motel for seven years, until they lost their lease in 2016 when the property was sold. Their new snacky bar venture, Bobo's, has been "three years, three months, and two weeks" in the making, says Andrée.

Decidedly not a version 2.0, the new Snack Bar is focused solely on serving and spotlighting local and Texas-made products. "It is a community tasting room," says Andrée, who has a fine arts and design background, of their "gallery for Texas producers." She, alongside Gilkey, a software developer, have built a new full-bar space with a retro modern living room aesthetic. "Bobo's is literally a bar that serves snacks; that is what we are. It's also an extension of our living room: We live right around the corner and have for 25 years, so that's the vibe we're going for."

The small space is currently set up to host in a pandemic-safe manner, with 12 or so masked patrons inside, and more on a patio that boasts artificial turf and pod-friendly firepit seating. Details like ambient lighting and a midcentury furniture motif pair beautifully with the large upholstered panels that liven up the outside and inside fencing, as well as the ceiling indoors. The panels were part of a three-year art installation located under the Lamar bridge.

All of the spirits, wine, and beer are sourced from within 100 miles of Austin, and the no-forks-necessary menu is, you guessed it, all bar-friendly snacks. The food is all locally sourced, much from the farmers' markets, and almost entirely vegetarian (with a considerable amount vegan), save for one dish: Karl's masa cakes will have an option for meat from Shirttail Creek Farms beef. 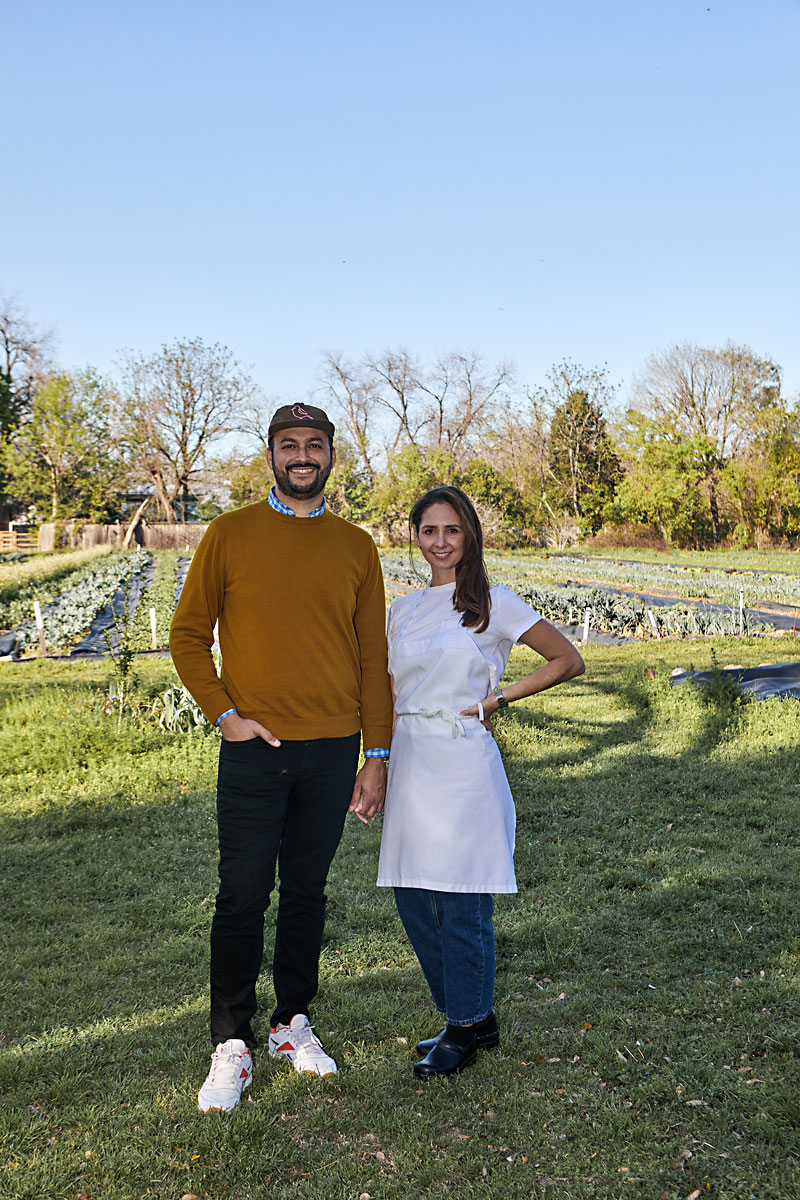 Hosting the neighborhood – which includes staples like Cherrywood Coffeehouse, and Skylark Lounge – is their goal, but Andrée reiterates that it's really about creating a comfortable space for "supporting local." She says, "We're a little mom and pop business, and we're trying to – even though I don't particularly like the phrase 'Keep Austin Weird' – we're part of the community and that's what we want to do. We've been members of Wheatsville [Co-op] for 20-something years. When we moved here in 1995, the airport was still over here, and we couldn't get even a pizza delivered to our ZIP code, 78722."

Another exciting new neighborhood venture, Birdie's, is not slated to open until mid-June, but also seeks to make space for friends and strangers alike to break bread and share stories. Married owners Arjav Ezekiel and Tracy Malechek-Ezekiel moved to Austin from New York and signed a lease on their upcoming restaurant a month before COVID-19 shutdowns.

"We wanted to do a super high-end fine dining restaurant, but we fell in love with the super casual way people interact with restaurants in Austin," explains Ezekiel. "We also realized that Austin has a bunch of really great high-end restaurants so it forced us to reevaluate what we wanted to do. One of the things was to build a place where people like us could go eat an affordable meal once or twice a week without breaking the bank, have a glass of wine, and enjoy the beauty of sitting outside."

Billed as "an approachable neighborhood restaurant and wine bar in East Austin," the food focus at Birdie's is ingredient-driven seasonal American food with influences from France and Italy. Malechek-Ezekiel, born and raised in Tomball, Texas, is at the helm in the kitchen, and her highly skilled culinary background includes training in Barcelona, Chicago, and the Culinary Institute of America in New York. She worked her way through high-end kitchens, eventually becoming a sous chef at Gramercy Tavern, among other culinary accolades. Malechek-Ezekiel says that she grew up an athlete who loved to eat, but it was falling in love with quality ingredients in Barcelona that really shaped her chef style.

Ezekiel, who was born in New Delhi, India, and moved to Portland, Ore., as a kid, is also highly skilled in hospitality. He helped his parents run Thali Supper Club, and went on to fine dining establishments like The Source by Wolfgang Puck and Michelin-starred Komi, before meeting his future wife and restaurant partner at New York's Untitled at the Whitney.

The name Birdie's has been a long time in the making. Malechek-Ezekiel dreamt of opening a restaurant for a long time and always loved the name Lady Bird and its Texas ties. "I met Arjav and fell in love, got married, and decided to open a restaurant, but we couldn't name it Lady Bird in Austin – we needed something unique. I liked the sound of 'Birdie's' because it feels like someone's grandma." Ezekiel adds, "There's something really powerful about that feeling when you walk into a stranger's home and it feels like you've known them your whole life. I think great hospitality has an ability to feel like that. And that name, to this day, evokes that feeling." 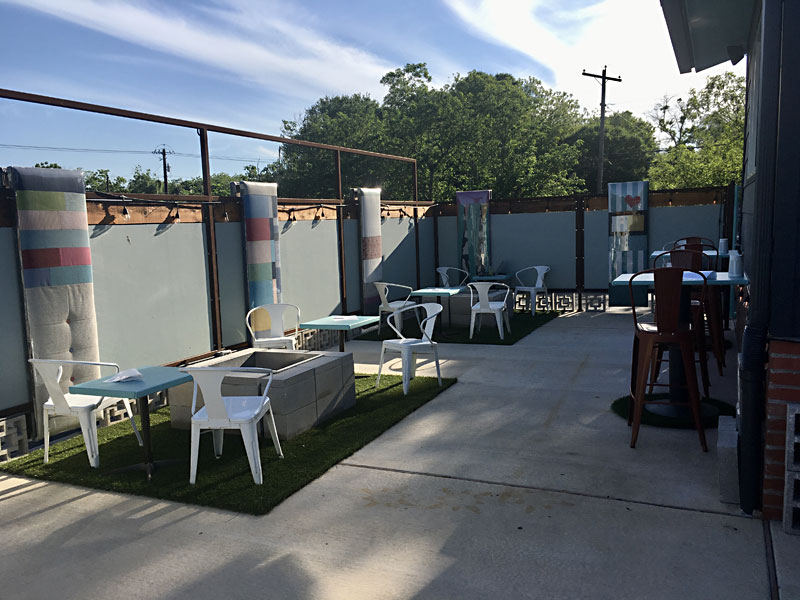 The patio at Bobo’s Snack Bar (Photo by Bethany Andrée)

The beverage program, headed by Ezekiel, will highlight low ABV cocktails and nonalcoholic drinks, in addition to wine and beer. Still recipe testing, Ezekiel takes notes from several countries with standards of low-alcohol beverages, including aromatized wines and cocktails like fino and tonic. "It [will be] reflective of how we like to drink in hot weather," says Ezekiel, who also mentioned his father's low-or-no alcohol preferences as inspiration. The promise of a not super boozy and dehydrating, but more fresh and revitalizing beverage menu is thrilling with summer just around the corner.

The couple wants to reinforce the idea that they are excited to be a part of the 12th Street neighborhood. "Tracy and I always think about how important it is for a neighborhood to feel like a restaurant belongs to them and when we think of our mission, besides taking care of our team, it's about making sure the neighborhood feels like Birdie's belongs to them."

Birdie's, a casual counter service spot in the former Taco-Mex space, shares a wall with Grace Fellowship Outreach Ministry. Ezekiel says that their landlords, Pastor Arthur Anderson and his wife Joyce, recently celebrated the ministry's 30th anniversary, and have been "incredibly empathetic and helpful in navigating the neighborhood."

The still under construction patio will definitely feature an herb garden, but we're hoping some Lady Bird wildflowers make an appearance too.

Bobo’s Snack Bar is now open to the public at 3850 Airport, Wed.-Sun., 3-11pm. Check @bobossnackbar for the grand opening announcement in the next week.

Birdie’s is slated to open in mid-June at 2944 E. 12th, and watch their channels for updates @birdiesaustin.