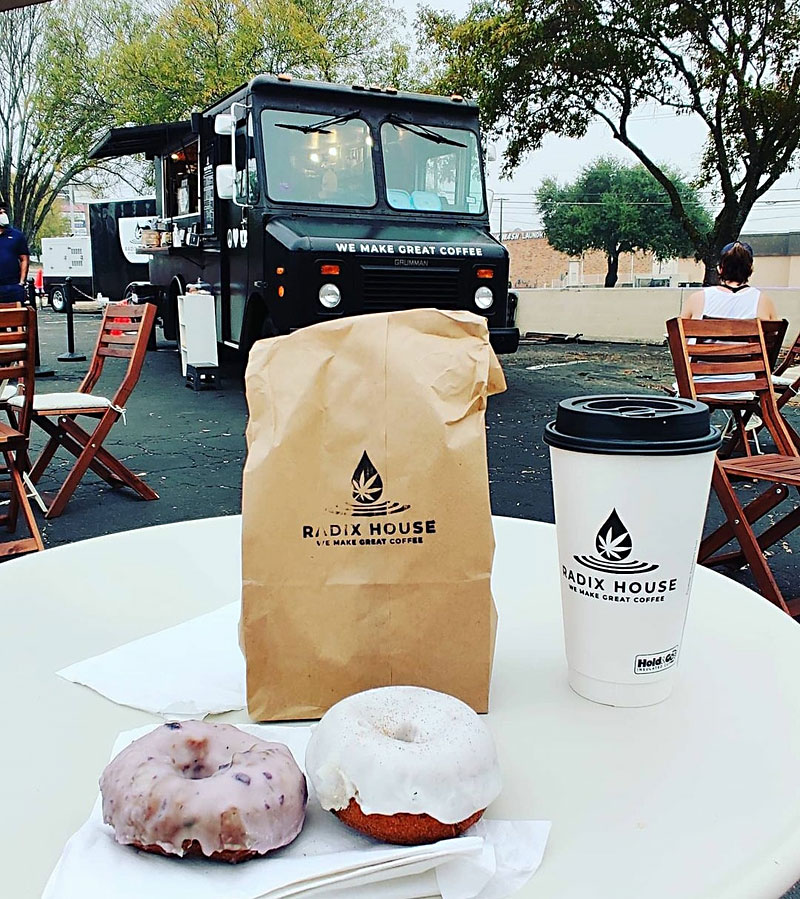 "Radix" is a Latin term for "that from which anything springs." In the midst of the pandemic, when many local businesses are resigned to a grim outlook and people are starving for connection, CBD coffee truck Radix House hopes to be the wellspring of community during the isolation of COVID, along with education about plant-based medicines.

Perched in the Westgate bowling alley parking lot, down the street from founder Roger Pilney's childhood home, the coffee shop and CBD dispensary offers a range of flavorful cold brew and hot coffees, teas, and locally sourced CBD products. Their breakfast tacos aren't bad either, but they sell out fast.

The Radix House coffee is ground out of bourbon arabica beans from the Fair Trade Premium-approved Kodukak Cooperative, a group of 990 Rwandan farmers. Pilney's favorite is the concentrated, caramely Rad brew, because he and the team fine-tuned it together.

Pilney founded the coffee truck with partner and childhood friend Gabriel Medel in hopes of bringing awareness to the use of CBD as a healing tool. Pilney has struggled with addiction and PTSD for more than two decades, and credits CBD – when used in conjunction with therapy – as a lifesaver.

Inspired by CBD advocate Charlotte Figi (the late 13-year-old girl behind CBD oil Charlotte's Web who treated her epileptic seizures with CBD), he researched CBD providers on the internet, picked some up at a local CBD dispensary, and tried it out. EMDR therapy seemed to treat his anxiety, PTSD, and depression much more effectively when he took CBD beforehand.

"Legally I can't say it'll work for you. But it works for me," says Pilney.

He started looking for ways to change the conventional narrative surrounding plant-based medicines, PTSD, and therapy. "CBD is a bridge in health care," says Pilney.

"It's like any other medication; without treating the underlying causes you're only treating the symptoms. For me, the two-parter to Radix House is that: This bridge, this product, this plant, can help you get to a therapist who can enable you to be better long-term with EMDR. And you can still utilize CBD for relaxing, injuries, etc." 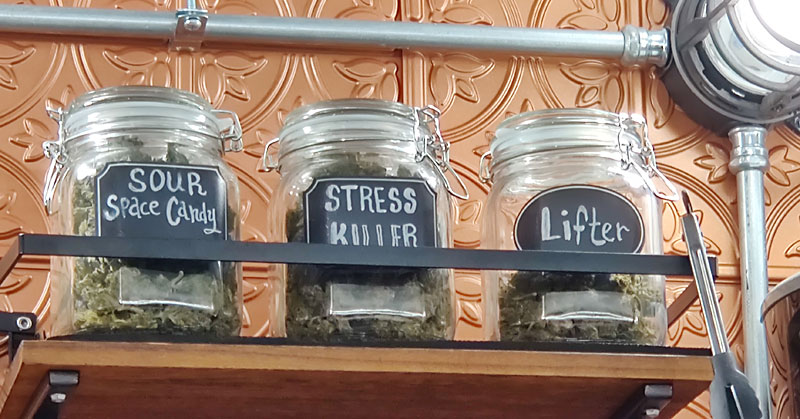 After a particularly bad episode of PTSD triggered by seeing the emotional toll COVID was taking on health care workers, Pilney felt there needed to be a place for people to see friendly faces and have a sense of normalcy. He took all his savings, 401K, what stock he had left, and cashed all of it in. Radix is owned outright by the partners. Through cost controls like avoiding brick-and-mortar locations and partnering with local vendors, they're able to keep their CBD prices down. While the baristas average almost $30 an hour, the owners don't pay themselves.

"This place is the reason I have my first apartment. My first car, that I actually own on my own. I can actually make car payments on it," says 20-year-old barista Ariel Shoemaker. "I was homeless for about a month in Austin, and it was really scary. I'm super happy now, just thinking about that girl from before."

And the formula seems to be working: Throughout COVID-era lockdowns, and during what are traditionally slow retail months, their sales have climbed. They are in the process of opening a new location Downtown at 1606 East Sixth Street. The overwhelmingly positive customer reaction can be summed up in the online reviews; Radix manages the rare feat of averaging five stars out of over 90 reviews across three platforms.

"There was a lady with Parkinson's who couldn't walk. Three days later after we gave her CBD, she's walking up to the truck with her cane in her hand while KVUE is here doing an interview with her makeup done, and I was stunned. I couldn't even speak," Pilney shakes his head. At this, Pilney tears up a little, bald head reddening as he unabashedly wipes his glasses.

Whether it's the coffee, the CBD, or the people, "Radix" is living up to its name.

Medel says, "Sending the message that maybe if you help one person, if you plant one seed about being vulnerable with their neighbor, with a stranger, having a conversation – that spreads."

A version of this article appeared in print on April 16, 2021 with the headline: Small Truck, Big Impact 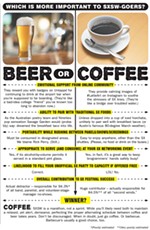 Beer or Coffee: Which Is More Important to SXSW-Goers?
From early meetings to after-hours parties, which beverage reigns supreme?