Food is love at this Pflugerville eatery 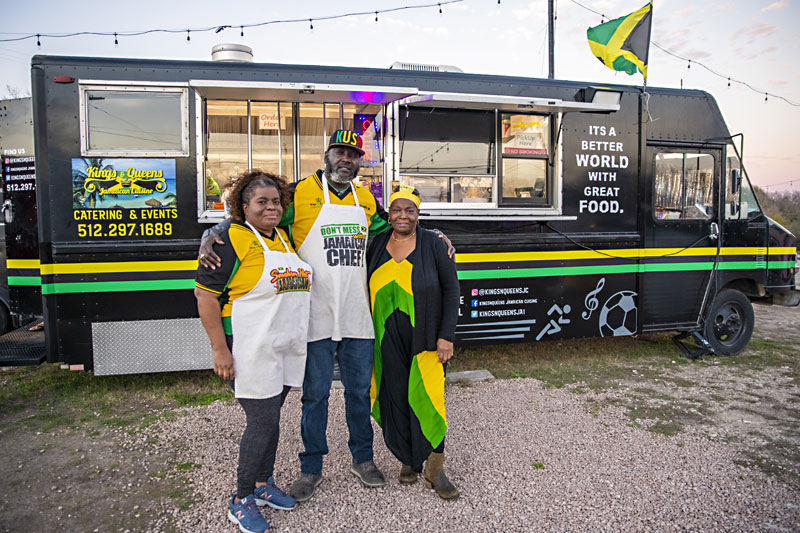 Several of Jamaica's signature dishes are well-known global favorites: jerk chicken, curries, fried plantains. But the Caribbean island's diverse cuisine, which rests on the shoulders of long-standing recipes influenced by the country's complex colonial history, is harder to fully grasp. Detailing that legacy would require a whole newspaper's worth of explanation, but it can be summed up by the official Jamaican motto, "Out of many, one people." Family operated food truck Kings & Queens Jamaican Cuisine, based at the Old Gin Pfood Court in downtown Pflugerville since October 2019, masterfully incorporates that culmination of immigrant stories from across Europe, Asia, Africa, and the Middle East in its piquant plates and the owners' broad ancestry.

"Our family ... it's the United Nations," says co-operator and kitchen matriarch Melda Morris, mother to the trailer's sister/brother chef/grill master duo Ann Marie and Warren Dyer. All three are native Jamaicans and aren't afraid to boast that their cooking skills – learned from working in their family's kitchens in their home city of Montego Bay – are a cut above anyone else's. "If we are in a cookout and we have the same [spices], I bet you mine is gonna taste better than yours," Melda says.

Having tasted a variety of items from their constantly rotating menu prior to our interview, I wasn't about to argue with her. The jerk chicken (served daily) is as tender and juicy as any artisan barbecue joint and spiced to please both heat aficionados and those who enjoy just a little kick. The oxtail (Wednesday's special) is glazed in a richer marinade and slow-cooked so it effortlessly falls off the bone (similar to slow-roasted ribs). Curry goat and chicken (Thursdays) balances a subtle sweetness with signature scotch pepper spice (the key ingredient in all Jamaica's fiery foods). And the pineapple jerk chicken wings (primarily Fridays) put mainstream wing eateries' mango habanero glaze to shame. It's one of three original fusion recipes, along with jerk chicken chili (arguably hotter than the dish it's derived from) and reggae wraps (burrata bread filled with boneless jerk chicken, bell peppers, avocado, onions, mango salsa, and a creamy jerk sauce made in-house by Ann Marie).

Neither the Dyers nor Morris are formally trained. In fact, they all have other careers outside of food: Ann Marie teaches at a charter school, Warren is a union sheet metal worker, and Melda is a caretaker. So how is it that their eats are so damn delicious? "We don't give away our secrets," says Melda with a smirk. 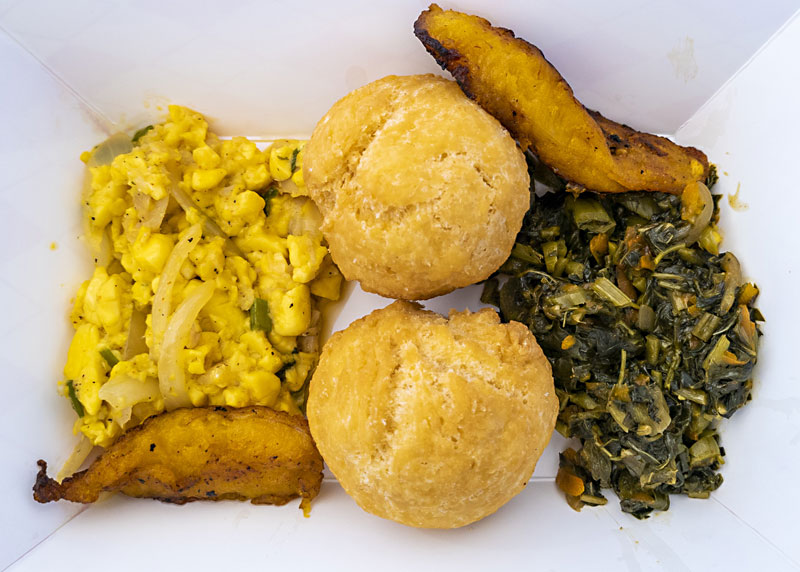 So their methods remain under wraps, but they were willing to talk at length about how their upbringings shaped their undeniable talent. Ann Marie began apprenticing under Melda, her grandmother, and great-grandmother from the get-go, and mastered all dishes by age 9 (same for Melda). Warren was likewise ever-present, and from age 5 was responsible for gathering leaves and herbs from the banks of the nearby river. Ann Marie was 15 when Melda moved to New York in 1986, when she took the helm in the kitchen, though she credits her father with always making "the wicked-est" curry and mannish water (a traditional goat soup). When Ann Marie joined her mother stateside 10 years later, it was cooking that sustained the family's connection – the two would craft cakes and puddings for every holiday and birthday and ship them to Warren in Jamaica.

"We're all passionate about food – that's one thing we share in common," Warren says. "The way we cook, the way I grew up ... they don't teach that in culinary school. You just can't."

Which is why they're chiefly dependent on family, despite everyone juggling other jobs, to run the truck. After the whole family settled in Central Texas – Warren got married and moved to Leander about 20 years ago, and his sister and mother arrived in 2012 – that thread continued with Warren and Ann Marie's kids, two of which previously took charge of the business but have since departed for college. Would it be possible for Kings & Queens to continue without direct kin involved?

"I don't see that happening," Warren says. "You have to be either Jamaican or involved in Jamaican culture to know how to handle [things]."

That deep generational knowledge is essential to their food's heavenly flavors and just as important in adhering to authentic ingredients. While in Jamaica, all meats, plants, peppers, and otherwise were sourced from the land they lived on. 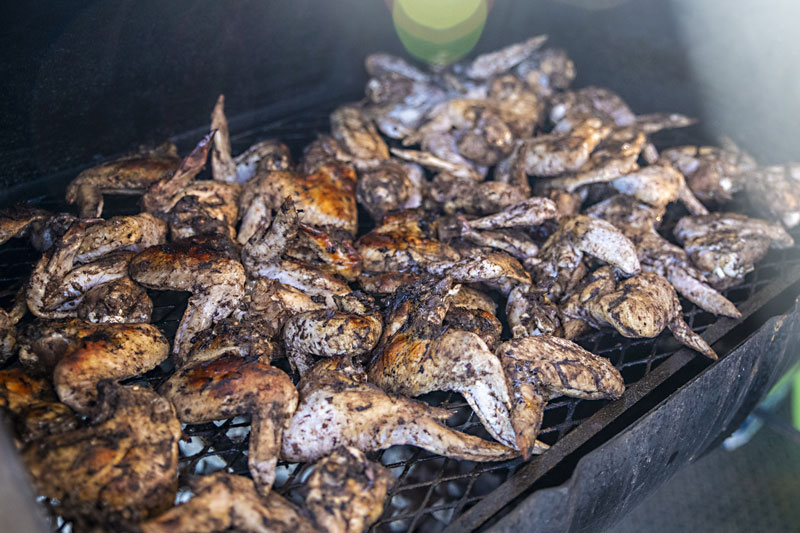 "Organic was always a way of life for us. It wasn't something we learned," Warren says. Here, they've aimed to uphold those standards as ardently as possible, buying antibiotic- and hormone-free meats from local ranches, growing their own callaloo (similar to collard greens and served on Sundays with fried dumplings and ackee salt fish as part of a traditional breakfast) and buying authentic spices from wholesale Indian and Asian restaurant suppliers, particularly Scotch Bonnet peppers, for which there is no adequate substitute.

"Some Jamaicans cook here in Austin [using] habaneros," Ann Marie says. "Haba­neros are hot, but they don't have the flavors of the Scotch Bonnet peppers. They're in everything we use. We will go miles away to get [them]."

Such a commitment to quality plays directly into Kings & Queens' slogan: "It's a better world with great food." The mantra highlights their underlying mission, which favors quality of life over turning a profit and harkens back to why it was so important that all family members were trained in the kitchen: to ensure the entire family – which, for Jamaicans, comprises everyone in their immediate community – gets fed.

Cases in point: At their family homestead, feeding all the members of the church next door, plus the elderly and less fortunate in the neighborhood, "was just a way of life." And in Central Texas, part of each Thanksgiving, Christmas, and New Year's since 2012 was spent cooking for local police/fire departments and homeless populations (they delivered 42 meals to unhoused individuals last New Year's Day).

"It's a way of giving back to our world," Ann Marie says. "I guarantee you, if we don't give away more than we sell, we're probably pretty close," adds Warren.

Truly, that ethos extends to anyone and everyone – within the first 15 minutes of our interview, I receive an invite to come over for Thanksgiving, which, they point out could be any day at Melda's house given that there's constantly some friend or family member in need of a meal wandering into the kitchen, where there's always food ready. "That's not joking," Warren says. "It's already set," adds Melda.

Relating everything to the title of their truck, they go on to explain their viewpoint that we're all kings and queens of our own world – meaning that no person is better than another – and every king or queen deserves good food, so it's "necessary" for everyone to have it. "[Our food] is love," Warren says. "And I say that because, when you go to a Jamaican home and they're cooking, you're eating. That's automatic."

After the winter storm that decimated Texas, Kings & Queens reopened for business this Wed­nes­day, Feb. 24. They’re at 310 E. Pecan St. in Pflugerville and available for catering: 512/297-1689, kingsnqueensjamaicancuisine.com