When it’s the array of heirlooms ground by stone at Barton Springs Mill, more and more people will

Just the basics in the lead paragraph here: First, farmers plant the seeds. Then, millers take the grain that's been harvested from what's grown and they grind it into flour. Finally, that flour is used by bakers everywhere – for bread, for muffins, for croissants, for pfeffernüsse, for, oh, you know: All the fresh-from-the-oven creations that help make a gustatory life worth living. Not to mention all the brewing and distilling going on, too, right? And so it goes, classically, with Barton Springs Mill out in Dripping Springs. You can see, in this infographic, who the farmers are – and the many fine establishments (not counting all you bake-at-homers) that make use of what the mill's done with those special grains. But what has the mill done, exactly? And why are the grains special? The rest of this text (see below) works toward explaining just that. 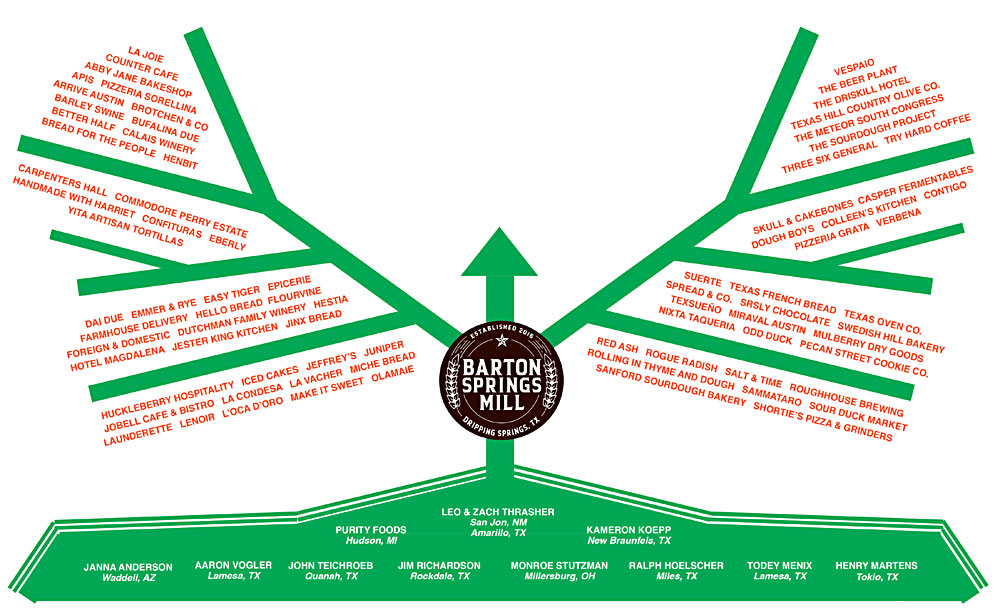 This is not the miller’s tale.

It could well be the miller's tale, because the miller we're considering here is a man named James Brown – the same James Brown who, as a master of the viola da gamba, founded Austin's St. Cecilia Music Series in 2002. This is the guy who, in 2016, fell hands and heart into the joys of baking bread and soon enough "sold his beloved violas da gamba for a mill and a banjo," and he's a hell of an interesting man.

But this article is more about the mill that Brown started and runs: Barton Springs Mill. It's about the mill because much of last year was about baking bread in general. And because, in the years before the 'ronas blew into town, we'd noticed a thing: Whenever we were eating at restaurants in Austin and were especially impressed by the bread or other baked goods, we'd ask the server, "Ah, where do you guys get your bread?" And more often than not, in maybe a dozen different places, we were told, "Oh, we make it here – and we get our flour from Barton Springs Mill."

So we figured it was time for a look into what makes this mill so revered and its products so tasty – and what are the places (the bakers, the chefs, the brewers, the distillers) making use of this mill and delighting their sure-to-return customers with a steady supply of grain-based miracles. Thus, that simple infographic above. Thus, this flow of bran-and-all explanation.

So, Barton Springs Mill specializes in heirloom and landrace grains, many grown in Texas since the late 1800s. The mill grinds out eight varieties of wheat, five varieties of corn, two varieties of rice and rye, and spelt, and it's all organically grown, as noted on the mill's website. These grains are grown – from seeds supplied by Brown and his crew – by farmers from across the state and beyond, and they're the base of the goodness that eventually sends your olfactory organs and taste buds to paradise.

After the harvesting, it's a matter of what the mill does – or, perhaps, doesn't do – that retains the full, natural qualities of the grain.

"It's based on two major foundations," explains Brown. "The first thing is that we're stone milling, and there's a big difference between that and roller milling. With stone milling, the wheat germ that is normally removed in roller milling, is crushed, and the germ oils are expressed into the flour. Also, we have – even in our whitest flours – we have tiny little fractions of bran layer in there. And the combination of the germ and the bran layer of the wheat berry, that's where a lot of the flavor and the aroma resides. In modern flour, they just want the white, starchy part – they want it to be a neutral canvas on which you do whatever you're going to do – so white, roller-mill flour is largely flavorless, odorless, and colorless. And that's definitely not what we're making at Barton Springs Mill. All these different grain varieties have a particular flavor and aroma profile. And the second thing is that we mill to order. Most commercially made flour, by the time it gets to the table, maybe it was milled, oh, nine months to a year ago? But all of our flour, even for our retail customers, was milled in the week they receive it."

Wait, fresh flour is a thing? It's not, like, infinitely shelf stable?

"The flavors and aroma that are in a freshly milled product will dissipate over time," says Brown. "The first four to six weeks are where a lot of the flavor shines. That's another reason that roller-milled flour is made the way it is: They want to avoid it going rancid. If it's freshly milled, that's not going to happen. But with wheat germ oil, like any oil, it oxidizes over time and can go rancid. So the commercial millers, knowing that their flour might not hit somebody's table until it's maybe nine months old, and wanting to make sure it's still a shelf stable product that hasn't spoiled, that's another reason the modern milling industry removes the germ. Our mill's flours stay good, we say absolutely good, at room temperature for three months."

And is there anything good about how the pandemic has affected, and how its future fallout might affect, Barton Springs Mill and heirloom grains in general?

"In November of 2019, which is usually our biggest month," says Brown, "we were doing about 60 online orders a week. But in March and April of 2020, we were doing 300 online orders a day. And I was discussing this with some of my fellow millers, about where it was all gonna settle out after the Big Flour Scare of 2020. And I said we're probably gonna retain about 10 percent of that business – and that's turning out to be just about right. But it's done a couple things. It got a lot of people baking. They dug deeper into it because they had the time, and so they have a better understanding now, they know what goes into making a loaf of bread. And I think, long term, that's gonna make them – even if they don't continue to constantly bake – it's going to make them appreciate what bread can be, and they'll seek out people making it in the manner they've been making it at home. Also, they'll be willing to pay the price for that bread – instead of the Mrs. Baird's and Wonder Bread that they're buying at the local grocery store."