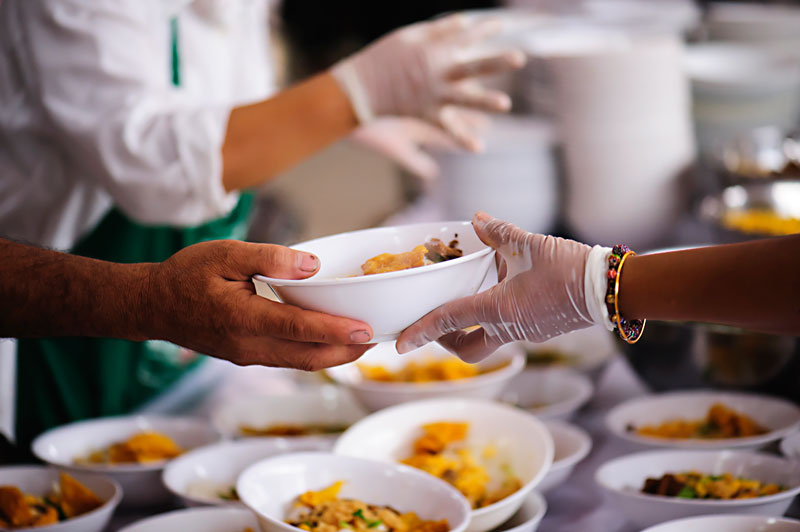 During the already painful summer of 2020, Garrett Foster's death dealt another shocking blow to Austin protesters for racial justice. They lost a friend and dedicated activist; Austin Direct Action lost a leader. Foster was a founding member of the mutual aid group that provided food and supplies to the unhoused people living next to APD headquarters on Eighth Street, in the thick of the protests. When Foster died, the group was reeling and others stepped in to help. "They were still in their grieving process," says Devin Robertson-Surfass, who volunteered that summer with his wife and a couple friends. "We had only planned to maybe do it for like a couple weeks, couple months, just as kind of a stopgap until they were able to start again." But as many of the members split off to form different groups, Robertson-Surfass, his wife, and a couple of friends took over permanently, providing 150 meals every Wednesday to the encampments at APD and Riverside. To date, they estimate 3,600 meals served since July under the moniker Cooking for Causes ATX.

“Our biggest thing is we want to make sure that we are there every Wednesday for these people, no matter what.” – Devin Robertson-Surfass

Until recently, Cooking for Causes' model was communal, lively; a backyard barbecue atmosphere. They would set up tables and prepare the food on-site: "We wanted them to just come hang out." But once Austin hit Stage 5 in December, that kind of gathering was no longer viable. "We realized that, hey, we are interacting with a community that has less support for medical services. And we need to be extremely mindful ... to prevent basically a superspreader situation." Like every in-person org, they pivoted, now using a model where they buy bulk food at the beginning of the week, send out a request on Facebook for volunteer cooks, prepare the food off-site, creating goody bags with utensils and other commonly needed supplies like Band-Aids, wet wipes, masks, tampons – and hand them off directly to people's individual dwellings. Robertson-Surfass says it's a method with pros and cons: "It's much harder for us to distribute clothes or blankets, things that are bulky; it's very hard to carry everything," since there are only three or four people distributing the bags. But on the flip side, "I think we establish more relationships in the model we use now. We're actually going to someone's tent, we're asking them, like, 'How you doing? Would you like some chicken?'"

Cooking for Causes is part of a larger ecosystem of mutual aid groups that cropped up mostly last summer: They sometimes share a kitchen with Austin Mutual Aid, offload excess food to the ATX Free Fridge at Nixta Taqueria, and share a lot of common values with those groups, prioritizing sustainability and making lasting connections with the community: "Our biggest thing is we want to make sure that we are there every Wednesday for these people, no matter what." But unlike other mutual aid groups that are solidly grounded in the historically anarchist model of solidarity, not charity, Robertson-Surfass says they're thinking of applying for 501(c)(3) status, something most others – and even some members of Cooking for Causes – see as antithetical to the mission.

They've already received corporate donations in the form of food containers. "Right now we're sitting on probably 2 or 3,000 containers. But their stipulation was, 'We can send you this, but for us to continue helping you, we need you to have 501(c)(3) status.' Really, that's so they can get tax write-offs, right? That's also a struggle, is that we're kind of helping that machine grind forward. There are definitely individuals who maybe have more of an issue with that than others within our group."

But for Robertson-Surfass, the incentive comes down to money that just isn't there in the current crowd-sourcing model. "It would be nice to have the funds to be able to just go buy 50 pairs of socks." He says with that kind of steady funding, they would be able to operate on a request-based model. Right now, they try to have necessities on hand, like first aid, tampons, soap; but sometimes they get requests that are more difficult to fulfill, like tents, or in one case, medication. "It was in the middle of the summer, his insulin went bad because it got hot. So we're trying to figure out, where can we buy insulin, do you need a prescription?" Robertson-Surfass says that life-and-death requests like that get fulfilled, but otherwise "we try to avoid it, because I see that as potentially more damaging to promise something and then not being able to follow through with it."

Having nonprofit status would make that model possible, he says, but there are other considerations that would make it more difficult as well: "We don't want to necessarily incorporate because having people cook from their homes doesn't mesh well with a 501(c)(3), right? That food has to be prepared in a commercial kitchen. Getting back to the whole commitment thing, we don't want there to be like a four week gap because we have to wait for finding a commercial kitchen."

Cooking for Causes may have a future as a nonprofit, but Robertson-Surfass sees one core tenet of mutual aid – sustained engagement with one's own community as a common project, rather than outside assistance from a privileged group – as a guiding principle. "Five months ago, someone said to me, 'This is really starting to feel more like charity than mutual aid.' And I've had to really think about, okay, what is the difference between mutual aid and charity?' I never could really grasp the difference between the two. But more recently, I realized that mutual aid really helps build more of a sense of community. [It's] more ... something that we can tell people every week – 'We'll see you next Wednesday.' We want people to realize like, we actually care about them. And we look forward to seeing them the next week, much like you would look forward to seeing any other person in your life."

What’s Happening, What’s Being Done, and How We Got Into This Cold Weather Catastrophe
More chaos with continued power outages, calls for water conservation