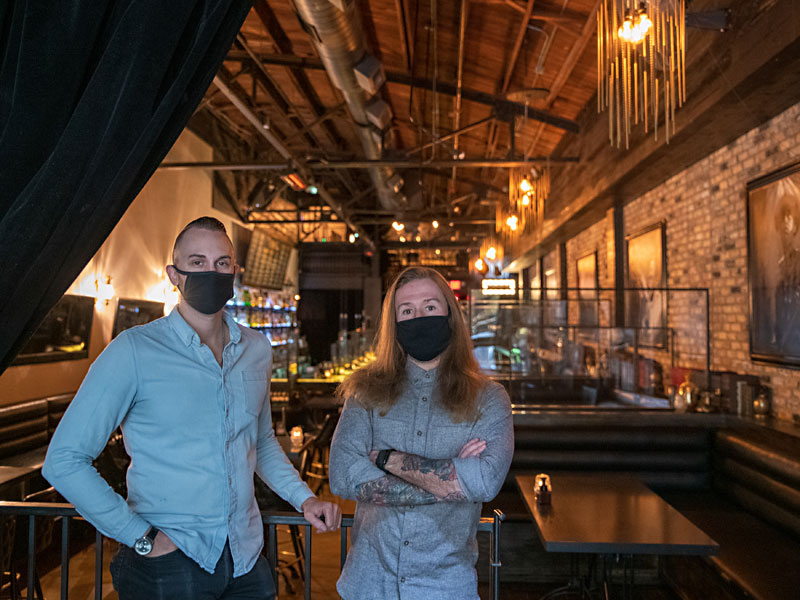 It's the necessary new normal: temperature checks at the door, masked and gloved employees, a face covering mandate for guests when not in their designated seats, several arms' lengths of distance between other humans. All of these requirements and more now permeate bar-restaurant operations citywide, making it difficult to ignore even during rare nights out that we're living in unprecedented and dangerous times.

Which is why, when indoor bars were given the greenlight to reopen at reduced capacity in June – so long as they reclassified as restaurants by estimating a gross of more than 50% food sales – the owners of Roosevelt Room (and its adjoining sister event space, the Eleanor) didn't rush the development of business practices and structural renovations that would provide utmost safety for guests and staff. Currently, COVID-era regulations require a food item with every drink ordered, and the new menu offers delights like spiked ice cream and rosemary-parmesan popcorn. Both bars are slated for a January 31 reopening (they were closed and delayed after increased infection rates across the city required Stage 5 restrictions). At the time of press, both bars are adhering to the in-person reopening schedule, and to-go drinks are still available.

Above all, owners Justin Lavenue and Dennis Gobis didn't want any changes to detract from the lively community-focused atmosphere patrons have come to expect since the establishments opened nearly six years ago at 307 W. Fifth St. After staying afloat through the summer with boosts from to-go and delivery options, plus federal assistance via the Paycheck Pro­tec­tion Program, Roosevelt and Eleanor reopened on Sept. 17, six months to the day after their initial closure. "When we were going through this process ... for these safety measures, we looked at every detail and asked, does it feel out of place, and would it then remind them of what's going on?" said Lavenue. "Truly, we want guests to forget while they're inside that COVID is happening."

Preserving the ambience of the bar space – part of the enticing experience of imbibing within the 92-year-old building's walls, and one that elevates this spot among Austin's cocktail havens – was integral to the plan. Sitting at the romantically lit bar, one can watch expertly trained bartenders use flames, smoke, and precise mixology to craft around 70 different cocktails from more than 500 spirits adorning the dazzling, wall-spanning backbar. Gobis partnered with in-house handyman Ben Harrison (formerly of Whisler's and the Austin Shaker) to hand-build Plexiglas partitions framed by pine wood. The seven installed at the main Roosevelt bar create six 54-inch pods with two stools apiece, enough room for a pair to comfortably keep elbows extended and push the chairs out with ease when getting up (an additional 12 dividers separate upstairs and downstairs tables/banquettes, and there are eight more in the Eleanor). With the frames' sleek ebony-stained finish that matches the dark tones of the space's other woodwork, they actually add to the room's elegance.

"We wanted to make sure that [the dividers] were clear ... and not have ones that are opaque where guests couldn't see and feel like they're in their own bubble, which I see quite a bit [at other establishments]," said Lavenue. Added Gobis, "Hospitality is a huge part of what we focus on, and [with COVID regulations] there's a lot more conversation that needs to be had with the guests," so this design – along with QR menus that pull up high-quality images of drinks, and classy brown sanitizer dispensers within each section – accommodates that necessary face-to-face with staff and proliferates a pre-pandemic "liveliness" among guests while maintaining decor congruency and deterring commingling.

The surreptitiously DIY approach aligns with the Roosevelt owners' strategy from the get-go. "Other than the existing banquettes that were already there at the Roosevelt Room, [all construction] at the Eleanor and Roosevelt has been done in-house," Gobis said. "It's cheaper to build your own bar than to hire a contractor. In the life of the business, we've saved hundreds and hundreds and hundreds of thousands of dollars by building it ourselves."

The dividers only set them back about $4,000, and those significant savings are necessary to keep the business running, especially when cocktail bars are getting miniscule assistance from the city. From the grant program of $10 million allotted for businesses with less than 25 employees, with a maximum of $40,000 per, the Roose­velt Room received a $3,500 check. "That's all we got from the city in 10 months of being forced to be closed," said Lavenue. "We're certainly pretty upset by the lack of [city-funded] support considering how much money we've given the state of Texas in taxes ... a minimum of $30,000 each month. Thankfully, bars and restaurants are here to serve people, not the government."

It's the massive community support propped up by their core ethos of "serving people drinks, not serving drinks to people" that has made their service-first safety innovations sustainable – especially during recurring pop-up events like Miracle on 5th Street, where Eleanor transforms into a Christmas-themed bar. (All changes will remain, save for the dividers, when enough of the population has been vaccinated.) Those factors, along with the trust and loyalty of the remaining staff, which dropped from nine bartenders to four at reopening, give the owner/operator duo confidence they'll be able to weather the remainder of the pandemic and beyond.

"We want to make sure [staff] can pay for lives while also managing emotions, deepest fears and paranoias, which can change on a daily basis," Lavenue said. "We're very lucky we have a very understanding, flexible team that trusts us ... to be able to weigh all the factors in any given situation and make the best decision." Gobis added, "We are more prepared to make crisis-time decisions in the future. We tested our relationships as a leadership team, and we're coming out of it stronger."