The Parlor Believes in Community, Artists, and Pizza 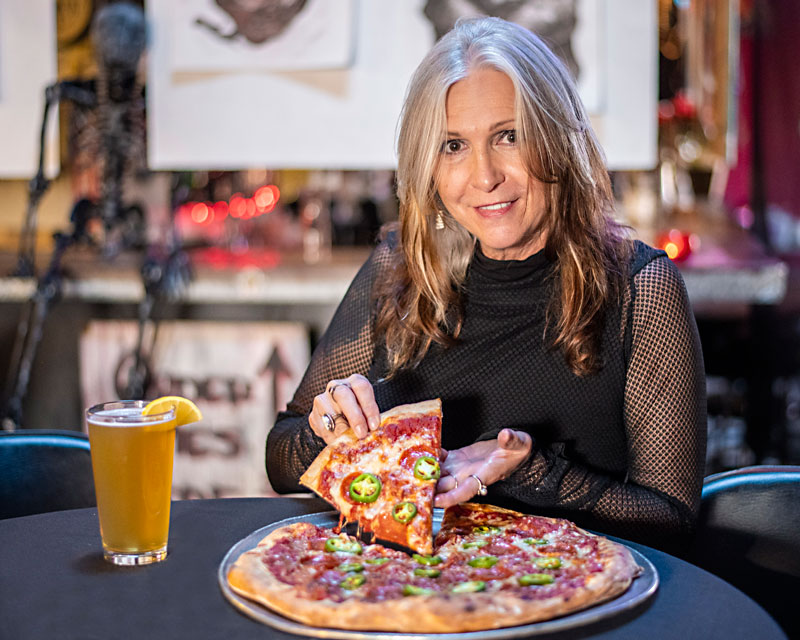 Parking lot coffins, vegan meat, Ms. Pac-Man, and a jukebox filled with punk classics are but a few distinct features that qualify the Parlor as a bona fide Austin original. As the devastating global pandemic continues to forcefully close the doors of hospitality businesses right and left, the 20-year-old Hyde Park pizza joint is struggling to hold down their matriarch's unconventional fort.

"On a bigger level, it's not so much about the pizza and beer. It's about the community environment that so many of us are wanting right now ... It's such a big part of the Parlor," says Autumn Spadaro, one of owner Deborah Gill's six now-adult children. "She's Italian, so feeding people, that's a big thing to her – but it's never been a place where if you don't order anything you have to leave. Just come hang out, be a part of our community – freaks, weirdos, squares, whatever. I think that's the hardest part for my mom – feeling that she can't provide that right now."

The Parlor opened its original location on North Loop in 2008, and it's been a family-owned and -operated biz ever since. Gill, who owned a bar in Arizona before working locally for years as a concert promoter, opened the Hyde Park location in 2011, and the family ran both stores until rent doubled at North Loop and it closed. The free music bookings took off, and they added commission-free art shows and free Saturday matinees – features the clientele flocked to and artists depended on. Features that COVID-19 has totally decimated.

The business was mostly just covering overhead when the pandemic hit, and the added financial loss from the booze stockpile they'd ordered in preparation for South by Southwest hit hard. "My mom was not very hopeful, I have to admit. She was like, 'Well, we just made our 20-year anniversary [in January 2020]. Is it worth it to try? How are we going to do this?' Her first reaction was devastation, [but] she almost operates better when things are the hardest. Then it was, 'What can I do?'"

The Parlor historically relied primarily on in-person sales, on people spending time there, buying slices and rounds and playing pool. Early in the shutdown, Spadaro knew that "the people who were going to stay ahead of this [would] have to adapt to it." They got to work setting up to-go alcohol, formulating a plan with their "great landlord" (Mrs. Kim, who also owns the El Caribe property on North Lamar), developing a new online ordering infrastructure and website, increasing social media, cutting operating hours to make payroll, and cleaning and updating the interior. Incorporating musicians, such a huge part of the whole operation from the get-go, is still a concern. Scott H. Biram, who played Monday nights at the Parlor early in his career, suggested a ticketed parking lot concert last fall. It panned out well, despite hurdles with staffing, neighborhood courtesies, and TABC considerations, so they're planning more when coronavirus rates allow. Perhaps in time for the now-virtual SXSW, which would normally be a massive boon to the bottom line. 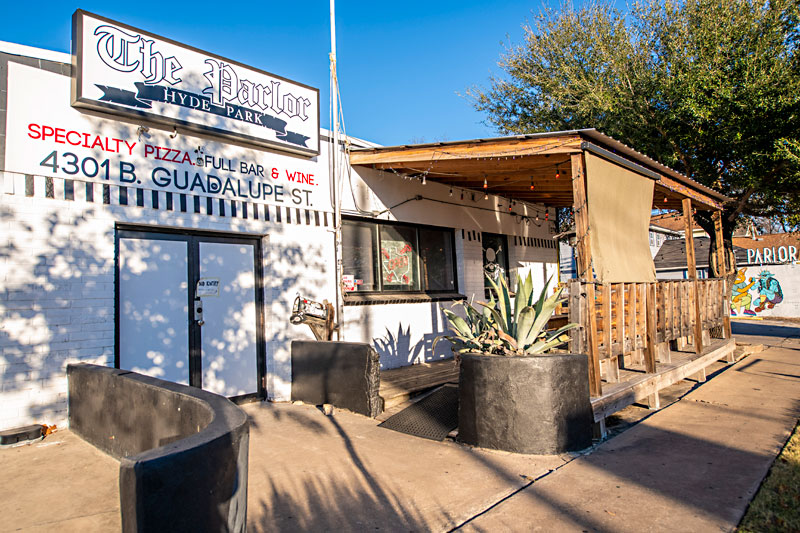 And of course, there's the pizza. When Gill was developing her plan, Austin was a smaller place. "It's a lot different now, but back then pizza shops were not that common in Austin – [just] Conans and a couple others," explains Spadaro. "My mom [is from the East Coast] and thought, 'I know pizza, I know Italian food,' and knew she wanted to serve alcohol and food, but not make it a burger joint – we had those in Austin – so she went with pizza."

The dough recipe was developed over time, and the Parlor became known for their house-made vegan meats. It started with a vegan sausage recipe created by Gill's mother, and when she passed away, Spadaro inherited the duty, adding vegan pepperoni. When the torch passed again, Spadaro's sister Singer, founder of Austin Vegan Meats, added vegan chicken to the family cookbook. They've also added French bread pizza and gluten-free options.

Still, the struggle is persistent. "I think the fear is that a lot of people are going to be able to go back to normal, but we're gonna be making up for all of this lost time for a long time."

Some months, Spadaro says sales are down 85% from 2019. They added as much outdoor dining as space allows and tried a reservation system for very limited dine-in, but the dire health risks won out. And assistance is negligible. "There's all these rules and restrictions, but nobody is offering any relief. The sad thing is that so much of [what makes] Austin is restaurants and bars. I think my mom is disappointed and let down by the city of Austin [government]."

Ten months into the pandemic, the hits continue in waves. Some days, it's bleak. Other days, they cover the bases. "My mom – the mother of six, owning multiple businesses over the years, being a concert promoter and having those moments where one show does not do well but the next one does ... keeping a small business, run by her, open for 20 years ... I think even though she has doubts, she has that feeling – and I have that feeling – that if we got through those first few months of this, we can get through this. We just have to get more creative."

“We don’t have anybody that will come dig us out of this. We have nobody, except for the community.” –Autumn Spadaro, The Parlor

Maybe that means expanding operating hours, maybe it's waiting for vaccines, maybe it's hosting ticketed parking lot concerts. In the meantime, Spadaro offers, "Support your local musicians, your local artists – buy their art, buy their albums. Follow them, watch what they're doing on the internet so they're ready to perform when we're ready to open again. And for us, when you're buying from a bigger company, or someone that has a ton of funding, try to consider [ordering from] the small businesses."

Even on pizza-free nights, Spadaro suggests ordering drinks, merch, gift cards, salads, and sharing their restaurant with "people who might be new to Austin and don't know anything about the Parlor or when we had shows. Remind people to support small businesses, especially family owned and -operated businesses. Like El Caribe! If one goes down, it takes out a lot of other people. We don't have anybody that will come dig us out of this. We have nobody, except for the community."