Where to find birria tacos in Austin 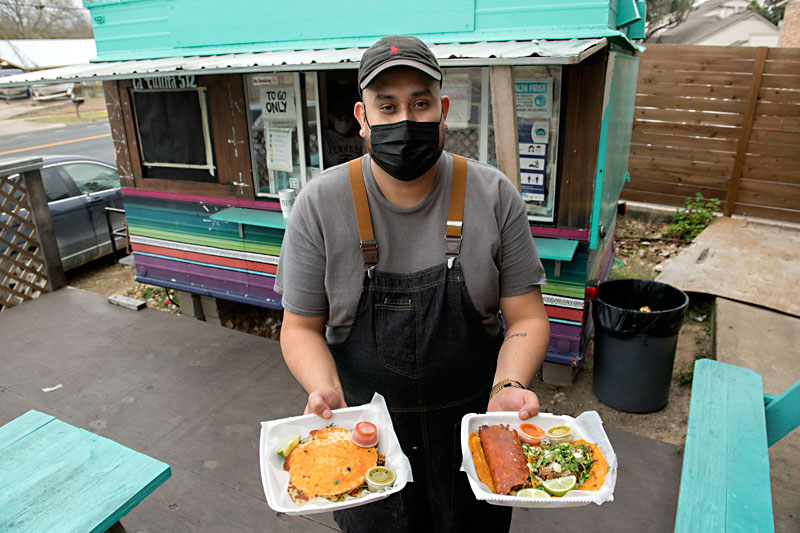 Birria, a dish from Jalisco, is traditionally made from goat or lamb and slow-roasted in a chile-based adobo for hours. The Tijuana version is said to have started in the 1950s when Don Guadalupe Zárate opened a street stand selling birria de chivo (baby goat) but switched to beef to achieve greater yield, using a cut similar to brisket.

Birria de res continued to gain popularity into the Eighties, when Juan José Romero opened Tacos Aarón and began peddling "quesabirria": corn tortillas folded and stuffed with mozzarella cheese and birria, then griddled to melty perfection on a grill. These tacos were topped with salsa de chile de árbol, then served with onion, cilantro, and a cup of beef consommé for dipping.

“I think birria has always been popular amongst us Mexicans, but with social media it has finally reached others.” –Gabriela Bucio, Gabriela’s Downtown

After Ruben Ramirez and Oscar Gonzalez discovered quesabirria on a visit to Tijuana and decided to introduce beef birria to L.A., they opened Birrieria Gonzalez in a barbershop's parking lot in 2015. Marketing on Instagram to a young Latinx community propelled the business to quick success, and soon other birria trailers followed. As the internet lit up with close-ups and slo-mo clips of the tender meat-and-cheese tacos submerged in steamy consommé, the trend started to spread up through California and across the U.S.

Here in Austin, Gerardo "Jerry" Guerrero saw that beef birria was having a moment, and decided to experiment with it. After seven years working at Torchy's Tacos, Guerrero had worked his way from the dish pit to the kitchen before leaving to open a trailer called La Tunita 512 in November of 2019. Guerrero was no stranger to cooking delicious beef low and slow, but in his home state of San Luis Potosí, barbacoa is king. So he began researching and recipe-testing before adding beef birria to his trailer menu.

"I knew about the beef birria in L.A. because of social media, so I started advertising it on Instagram and tagging everyone who runs a food blog page," Guerrero recalls. "I don't know if I was the first one to do beef – I'm pretty sure I wasn't – but I really think I was the first one to advertise it. I feel like Austin was just waiting for someone to start doing it because almost all my first clients were telling me that they had been looking for those tacos for months here in Austin."

Guerrero cooks his guajillo-based birria for four hours and fries his handmade corn tortillas in beef fat from the consommé. He makes a green jalapeño salsa and a red salsa made with tomato and chile de árbol. In addition to birria tacos, he offers a "quesotaco" made with griddled Monterry Jack cheese wrapped around the meat, a birria mulita, and birria ramen served out of a Tapatío noodle bowl. A quick glance at his droolworthy Instagram feed (which has grown to over 10,000 followers) will show that Guerrero sells out daily, going through 11 briskets a day.

"I think birria has always been popular amongst us Mexicans, but with social media it has finally reached others," says Gabriela Bucio, who owns Gabriela's Downtown with her brother Arturo. In Michoacán, from where their family originates, birria is a special dish made to celebrate milestones like birthdays and weddings. "With so many people sharing photos of their birria tacos it has opened others' minds to trying it. It is also very addicting, so once you try it, you will keep coming back for more."

This past spring, they began running birria and quesabirria tacos as a weekend special at Gabriela's Downtown, using beef and a paste made from guajillo, ancho, and cascabel chiles. They begin the process at 4am on the weekends, working in very small batches to ensure ultimate freshness. Their salsas are all made fresh daily and their tortillas are not only made by hand, but griddled to order too.

"Birria takes a lot of time and patience to make," says Bucio. "That is why we like to offer it only on the weekends ... and it is great for crudas, aka hangovers. We also have a club on Sixth Street, Mala Vida, so we know our customers love birria after a night of partying."

A little digging and you'll find birria tacos on menus at a handful of other places around town, including Taco More, where they make theirs with the cabrito (goat) used traditionally in Jalisco. But recently, a couple more players have entered the game, launching entire businesses based solely on birria tacos. In August, Chris Meroff opened Lechuza Birria Tacos in the same South Lamar space as his other business, Phantasma Pizza Kitchen. Lechuza's Culinary Institute of America-trained chef Carson Symmonds seasons and sears the meat on a grill to achieve char, creates a braising liquid starting with a mirepoix base, and uses a French braising technique to create a rich consommé. He's also been experimenting with a wide variety of proteins, from beef cheeks to chicken thighs to leg of lamb.

"We choose these proteins for their depth of flavor and richness, and their accessibility and ease of cooking on a large scale," says Symmonds, who notes they'll soon be adding goat to the menu.

In September, Brian Le opened a birria trailer on Seventh and Lamar and named it Pepe's Tacos as an homage to his great-grandfather, who owned a restaurant in Mexico City and passed his birria recipe down through four generations. He marinates the meat with spices for 12 hours before slow-cooking it for eight. Le also draws on his Vietnamese heritage, using pho and bun bo hue cooking techniques to make his consommé. He says, "It improves my cooking because I can combine two different cultures' cooking styles, making a new cooking style that I can call my own."

In a city obsessed with both tacos and barbecue, it should come as no surprise that birria tacos have risen to quick success here. "The hype started through social media but has delivered with something very delicious," says Symmonds. "These amazing bright-red, cheesy, meaty tacos that you dunk in a flavorful broth has become an addiction similar to pizza. Austin is obviously taco-crazy, so when you introduce something that's as addicting as these, it becomes something that will stand the test of time."

Where to find birria tacos in Austin: