The Far Out Lounge Focuses on Food, Safety, and Austin Musicians

More than a venue 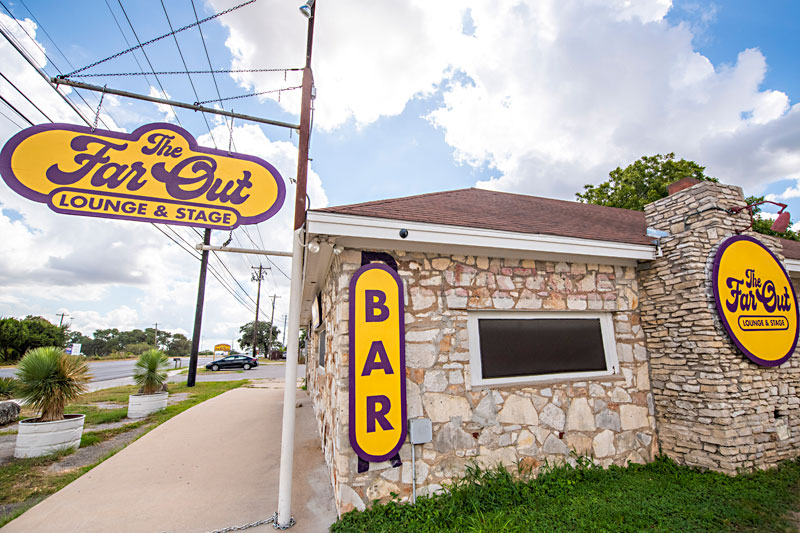 Like many other spots that make this city a live music, bar-hopping, and dining destination, The Far Out Lounge & Stage is more than just a watering hole. The current owners of the storied property at 8504 South Congress Ave. have had to get creative and communal, and focus on both the food and the family of musicians, to survive.

The stone cottage now home to The Far Out (TFO) was built in 1908, and in recent decades it housed Austin favorites like Red Shed Tavern (closed in 2018) and the biker bar Beverly's. Known in the early days as The Last Chance bar, it was "the last chance to get a beer before San Antonio" (according to a 2005 Chronicle letter to the editor). The newest iteration kept part of the original bar where infamous bank-robbing Newton Boys saddled up for post-heist brews, where UT student Janis Joplin played gigs long before Woodstock, and where countless Austinites enjoyed almost year-round patio weather in the large backyard. Skip ahead to Feb. 2019 when Hopfields owners Bay Anthon and Lindsay Anthon-Zuloaga and General Manager Pedro Carvalho opened a cozy living-room-style cocktail bar called Nicolaza's with a Hopfields sibling food truck. The team relaunched as The Far Out Lounge & Stage in late summer 2019, and they were working on promising 2020 plans when the pandemic struck in early March.

"Those initial few weeks were super dark, really scary," said co-owner and operator Carvalho. "We were just trying to make sure that whatever resources we had, we were able to share with the people who make this place possible."

Very fortuitously, pre-pandemic the team had already applied for permitting and talked to engineers on how to build out the restaurant, which meant they didn't have to "go find some loophole to turn the bar into a restaurant," said Carvalho. Upon reopening in May, about 90% of the staff returned, and they've kept the inside of the small restaurant venue at 0% capacity, instead focusing on the very large outdoor space.

"We have an obligation to this part of Austin, and to the people who made this place what it is, to keep the music scene alive ... while maintaining a culture of safety and not hurting people," said Carvalho. The added expenses to outfit TFO for new requirements in COVID-era hospitality were "insurmountable" at first, things like building an outdoor bar, switching to disposable everything. "We now pay somebody to stand at the front door and take your temperature every night, and we pay somebody to ask you to stay seated – which is a thing I never thought we would do at a music venue."

The main food concept – a truck called Fowl Mouth led by Sam Castrale, former executive chef at sister restaurant, campus-area gastropub Hopfields – was a team effort. "We rebranded [the food truck] during the beginning of the pandemic. We didn't have anything to do. We're sitting around like, we're closed, there's no one here, we don't have jobs, let's [mess with] the food truck – turn the restaurant on and see what we can do, out of boredom and from necessity, just to keep some kind of morale. We're all workaholics; we don't know how to not work," Carvalho said. "It's a pretty awesome team behind a chicken joint – it's elevated food truck food."

“The problem is there is no assistance and we’re left here in the dark. We have to fend for our friends and family here. And we owe that to South Austin to stay alive.” – Pedro Carvalho

Fowl Mouth is also joined by a small pack of other local food trucks: Wünder Pig Barbecue, SolarSno Shaved Ice, Austin Rôtisserie, and Lucky's Italian Sandwiches. Only outdoor bar service is currently operating, with a full bar and 36 rotating taps with beers, ciders, and seltzers. As their website says, "Whether you want a shot and a beer, a claw, or a classic cocktail – we got you!"

But it's not just the dishes and drinks enjoyed on picnic tables spread across 3 acres of shady live oaks that's kept TFO alive. Hellbent on being more than "just a music venue," TFO's publicist and Event Organizer Allison Welsh said it's also the responsibility they feel to musicians, South Austin, their staff, sister businesses, and partnership organizations, to "keep the sense of community." Relationships with Black Swan Yoga, Redeemer Small Batch CBD, MOD Fitness, Eastside Pop Up, and JuneShine Hard Kombucha (among others) mean they can host fundraising events for different organizations like Austin Justice Coalition, Multicultural Refugee Coalition, and the Cajun Navy Relief. They've also hosted benefit shows, including one for Scotty Mescall, known as "The Mayor of House Park," and in June, a Black voices listening party. Creating a safe space for everyone is a driving force, said Carvalho. "It's why we do it – it's the whole reason for it. I hope it shows."

There have been a small number of people who bristled at the new restrictions, but TFO will not relent. "They did show up, and they did not find a place that they enjoyed because they found out right away that you have to wear a mask and be socially distanced here," explained Carvalho. "There is a musician on stage but you can't be close to them, and you have to follow CDC guidelines at all times. Pretty quickly they got weeded out and it became a place where we just want to keep the music alive."

Attendance is capped at around 150 guests, or 10% of capacity, to manage the spread-out and seated crowd, and mostly everyone is understanding. "It's been super positive. Most people, by this point, are used to it. It's been a year of us going through this hell and when we get a little bit of pushback here and there our message is always like, 'Dude, all you have to do to watch a live music show in the middle of a worldwide pandemic is sit down and put on your mask.' Seems pretty reasonable. We're not asking you to do anything out of the ordinary – what's out of the ordinary is getting to see a show, so don't make this any harder or you have to leave."

Still, the back and forth restrictions and shutdowns have taken a toll. "I feel like a lot of the Stage 1-5 conversations have been really frustrating and ... it's a huge ask from the local government without any real assistance. We're doing it as safely as we possibly can, and for the local government to make recommendations on how to run our business, [without] actually [having] any help for local business, it's infuriating to say the least. We know the CDC guidelines by this point. What I can't do is go to my staff and tell them that Mayor Adler said, 'It's probably a good idea for you to not come to work for a while – and he's not going to pay you either. Your rent's not going to stop, and your electric bills will not stop, and you won't be able to feed your family, but we highly recommend that you do that.'"

“The problem is there is no assistance and we’re left here in the dark. We have to fend for our friends and family here. And we owe that to South Austin to stay alive.” – Pedro Carvalho

Carvalho added, "I think 'impractical' is super light. I would say it's pretty fucking immoral for them to do that, to not have assistance for these people. We have an obligation to help them stay fed and nurtured and keep their homes and be safe. I don't know how to tell somebody that they're going to lose 100% of their stream of income – it's just a ridiculous ask without any assistance, [and] I dont think it's fair to ask of a [small] business. If the local government was going to pay all of the local musicians the money they are getting playing shows at TFO and pay all of the staff during this whole thing – it would be an easy 'let's shut it down and call me when you're ready' – that's not a problem.

"The problem is there is no assistance and we're left here in the dark. We have to fend for our friends and family here. And we owe that to South Austin to stay alive."

As for the new year, one still heavily weighted under a raging pandemic, Carvalho is hopeful. "We have a really strong community down here in South Austin. I don't think that the music community, or the music fans, or the people who work here, will really let it go, and we'll do our best to stay safe, keep others safe, and keep Austin music alive."

They've got a second, inclement weather-friendly stage set up with a 4,000-square-foot tent with high ceilings and open sides, complete with a giant space heater and steady bookings. Continuing through January, TFO is raising money for SIMS Foundation, an organization "close to the heart of our talent booker Lawrence Boone." For those still not ready to venture out, Fowl Mouth and the other food trucks offer takeout and delivery options. The January special, to coincide with the Sunday residence of the month, A Live One (Phish cover band), is a new cornflake fried chicken sandwich special, served on a biscuit with jalapeño jelly and Swedish fish syrup. "We're trying to get as creative as possible to keep it going."