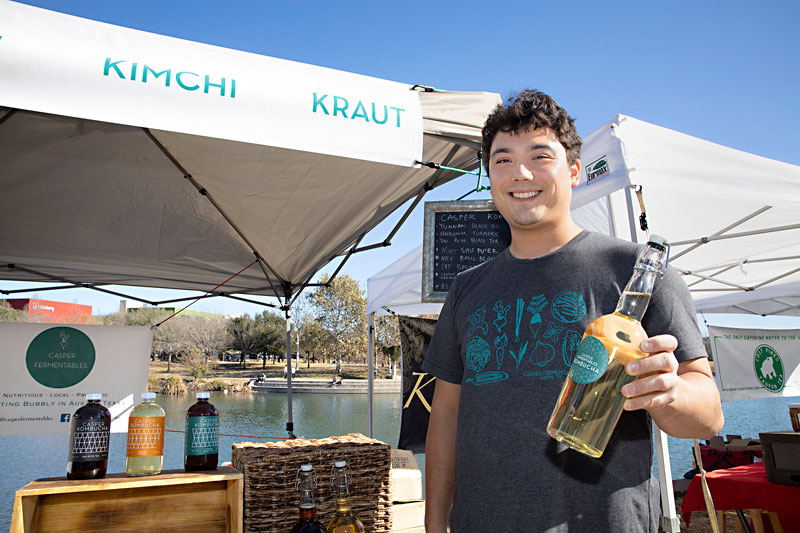 Ben Hollander grew up eating and preparing a spectrum of Korean food and began his culinary education at age 13 by training under a chef. That chef – his mother – owned a popular udon restaurant in Seoul before relocating to Washington, D.C. "Her kimchi and her kombucha were things that really stuck with me when I left to come down here to go to school," Hollander says. "I missed that flavor so much and couldn't find anything that was exactly like it or even close to it."

“If you think about it, Texas barbecue is eaten with onions and pickles and kimchi is basically those two things combined with some spiciness.” – Ben Hollander

He also missed the delis and restaurants he'd visit with his dad's Jewish side of the family so naturally Hollander began working on his own products inspired by his favorite familiar foods. Now the owner/founder of Casper Fermentables, Hollander relocated to Austin in 2012 to study microbiology and learn about global food systems (and their systemic flaws) with Research Professor Raj Patel at the University of Texas. "Pesticides and preservatives are known to be deleterious for the human body in a multitude of ways," he says. "And [Patel] is a big proponent of [the belief that] this is not complicated – people just need to have access to real food."

Hollander also frequented San Francisco's world-renowned bakeries, Tartine Bakery and Josey Baker's The Mill, attempting to imprint the taste and texture memories of their sourdough on his palate so he could reverse-engineer it in Austin. He studied the work of Sandor Katz, learning that fermentation is the only form of cooking that increases raw food's nutritional value. This practice of "food as medicine" has played a crucial role in Korean survival and cultural identity for generations. "The microbes in our gut are responsible for our digestion, our moods, and our immunity," explains Hollander.

"In our guts, there's a battle of good and evil – beneficial versus deleterious microbes. Eating and drinking probiotics adds good soldiers to the fight. Probiotics from fermented foods help you establish and maintain a healthy composition of microbes in your gut."

While still in college, Hollander worked as a cook under Chef Evan LeRoy at Freedmen's, Chef Fermín Núñez at Launderette (now at Suerte), and Chef Amanda Turner at Juniper, where he was promoted to fermentation director. Hollander rejoined LeRoy, now at LeRoy & Lewis, to consult on the kimchi recipe and fermentation program, and along the way, Hollander started a cottage food business and began selling pickles, kimchi, and vinegar at HOPE Farmers Market. When he perfected his kombucha recipe, made with high quality Yunnan tea, Casper Fermentables was born. Hollander named it after the ghost that is, much like probiotic microbes, actually friendly – not scary at all.

Hollander credits his friend So Han Fan, proprietor of West China Tea Company, for introducing him to the world of tea. He makes one kombucha with farm-direct pu-erh, a fermented black tea from the Yunnan province, and another with picked and sundried Yunnan black tea. All of the tea is harvested from century-old wild trees without any watering, fertilizing, or pruning, which gives the final product a real sense of terroir. Unlike most kombuchas, which are blended with fruit juice and often full of extra sugar, Casper's balanced and effervescent kombucha showcases the fair trade and organic tea itself.

"I think it gets lost that kombucha is made of tea, that tea comes from China, and that kombucha is an Asian food," explains Hollander. "When I first moved here, I felt like people were culturally appropriating kombucha and so I wanted to make a product that was more authentic and honored the base ingredient, which is tea – something that never gets honored."

About a year and a half after selling his bottled kombucha in stores, Hollander decided to launch Casper Fermentables at the farmers' market, giving people a chance to sample his kombucha, and his kimchi, a vegan adaptation of his mom's original recipe.

"Sometimes I feel like kimchi can be really overpowering, so we found that this is the recipe that really connected with people at the market," says Hollander. "It's really simple and very clean-tasting, which allows it to go with a lot of things."

Every week, Hollander ferments his kimchi for three days at room temperature and then moves it to the refrigerator to finish it off. The resulting fermentation is a bit sour but still has a little life – and plenty of crunch – to it. "When my mom was growing up in Korea, my grandpa used to bury the kimchi in the ground in the winter," says Hollander. "It would snow a bunch and he'd take the snow off and dig up this huge crock, so the fridge simulates that cold fermentation." In addition to the vitamin, nutrient, and antioxidant-rich lacto-fermented cabbage kimchi, Casper Fermentables features other fermented veggies that rotate seasonally. Right now they are offering a radish kimchi, escabeche-inspired pickled jalapeños and carrots, and a turmeric kraut made with fair trade, single-origin heirloom turmeric from Andhra Pradesh, India. "We get all the produce locally and it's fermented in a salt brine for four weeks so it's fully acidified, but there's no vinegar in it," says Hollander. "It's living, probiotic food."

Hollander advises kimchi newbies to try adding the spicy tangy cabbage to grilled cheese or fried rice, but those who like the cabbage to break down more, becoming even more intense, might try making kimchi jjigae (stew) or kimchi geon (pancakes) with it. "It goes amazing with pastrami or Texas barbecue too," he points out. "If you think about it, Texas barbecue is eaten with onions and pickles and kimchi is basically those two things combined with some spiciness."

Casper's bread program, based on a long sourdough fermentation, features baked goods that are also good for gut health. "I actually have Crohn's disease but I'm able to eat all the things that we make because they're fermented," says head baker and General Manager Phoebe Raileanu. "I've lost 15 pounds since working here because it's all so healthy and moves your digestion ... when you eat something that's alive, it just helps your gut in so many ways."

Hollander's San Francisco sourdough research has been manifested into beautiful rustic loaves that are dark and crunchy on the outside, soft and stretchy on the inside. The same sourdough starter is used to produce beautiful bagels (plus house-made cream cheese), fluffy focaccia (often folded with turmeric kraut), and Jewish delicacies like babka and seasonal treats like sufganiyah (jelly donuts) for Chanukah.

Casper Fermentables' baked goods and ferments can be preordered and picked up at any of the local farmers' markets; his kimchi and kombucha are sold at various local retailers. While he has big dreams for the future of Casper Fermentables, he's currently focused on growing his team, finding a new kitchen space, and expanding in whatever ways feel most organic in this unpredictable climate. Above all, he wants to keep making honest, nourishing food that's accessible to everyone.

"At the time I was starting this, the only time I felt like you could find food that was made with local vegetables and handled by people who were serious, professional chefs was at expensive, fancy restaurants," says Hollander. "I think that's something we want to do more of in the future – not only offer really nutritious, artisanally crafted foods but make them accessible to different members of our community."