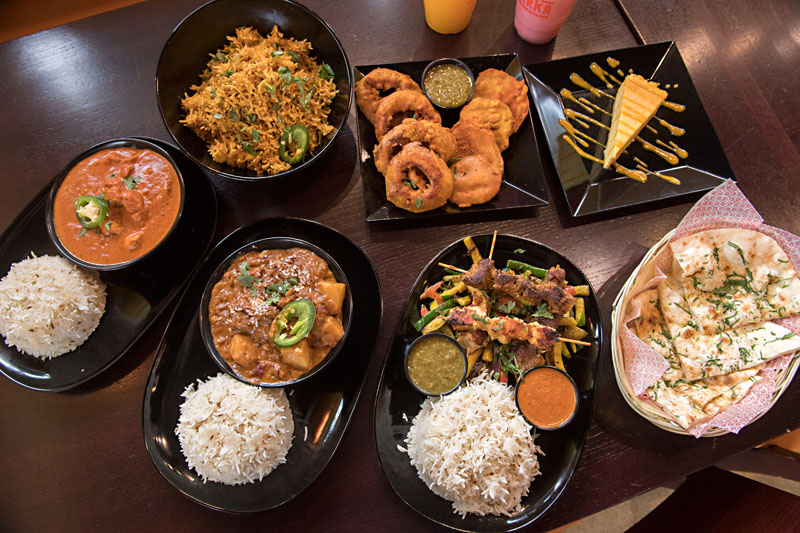 Tinku Saini says CEO is just a fancy title because in a growing founder-run company like Tarka Indian Kitchen, he wears many other hats. The co-founder, along with wife Regina and three other partners, is laser-focused on staying true to their passion for sharing Indian cuisine with everyone while building a fast-casual empire.

Tarka's original location ("still by far our busiest store") opened at Brodie and 290 in 2009, serving fast, affordable, fresh-to-order curries, kabobs, biryanis, freshly baked flatbreads, and drinks like fresh fruit lassis. Currently, they've got eight locations – four in Austin, three in Houston, one in San Antonio. They just signed the lease on a ninth, slated to open in Houston in May, and are poised for 10 by the end of 2021. Saini says, "It's just been shocking, even during COVID, how much busier things have gotten."

Vegetarian and vegan customers are a core base, and Tarka is keen on feedback. Last year they launched a digital rewards program that gained 40,000 sign-ups in seven months (compared to their former email listserv of 10,000 people in 10 years) and allowed customers to voice desires for the annual menu refresh. Plant-based and gluten-free menu items were big, but the loudest response was wishing they'd bring back their very labor-intensive vegan and GF vegetable pakora (hand-dipped and fried in seasoned gram flour and roasted cumin batter). "As a fast casual restaurant we've got to come up with ways to simplify operations," he says, "[but] my goodness, the amount of blowback we got, I'd never seen anything like it." 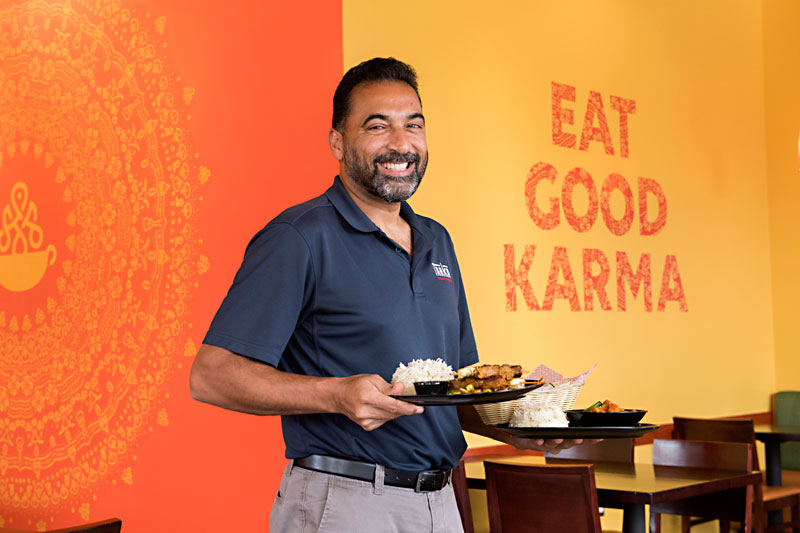 So, the vegetable pakoras are back, along with Beyond keema (plant-based ground beef curry with peas and potatoes, served with vegan yeast rolls), a gluten-free mango cheesecake, and a vegan coconut milk option for the mango and strawberry lassis. "The mango version is like a piña colada, frankly, so if you wanted to get one to-go and add rum when you get home, that's a beautiful [option]."

Tarka's large recipe list has been quilted together from several chefs, including Saini himself, throughout the journey. Before Tarka, Saini was a co-founder and co-owner of Clay Pit, which they opened in 1998 and operated until selling to their head chef, Bali Singh, in 2007. Before Clay Pit, Saini and his wife were working for Chutneys Bistro, a contemporary Indian restaurant in Seattle, when his cousin visited in 1997 and suggested they open something similar in Austin. "Back then all I knew about Texas was like the show Dallas, right? Big hats, big hair, boots. I'm thinking, 'I'm in Seattle, a world-class metropolitan city. Why would I ever move backward in time 10 years to go down to Texas to open a restaurant?' But when we came to visit, we saw a lot of similarities [and] we really fell in love with Austin – it is sort of an oasis."

Saini's friend and co-worker in Seattle was Maqbool Ahmed, who joined them to open Clay Pit. "He was an amazing chef, but as some chefs tend to do, it's a pinch of this and a pinch of that and it [was] not hardcore recipes," Saini says. "Every time he makes a tikka masala or a korma it was mouthwateringly beautiful but slightly different."

When Ahmed broke his hand, Saini stepped in as executive chef, and over the course of the next year, the two worked together to develop written recipes. "Turning his art into science, essentially, is where a lot of our recipes come from," Saini says, in addition to collaborations with partners and chefs like Navdeep Singh (no relation to Bali). He also credits his own background of "good authentic Indian food" as part of Tarka's success. He emigrated from India to America at 5 years old, settling in St. Louis where his mother hosted community-famous potluck dinners and his father ran a small Indian retail store ("video rentals, clothes, travel agency, groceries") that offered freshly made snacks, desserts, and samosas.

“For a long time [Indian food] was known as a niche cuisine, something you’ll get every once in a while – maybe it’s a little intimidating, maybe it’s too spicy, whatever misconceptions there are – so our whole goal is to make it approachable.” – Tinku Saini

Early on, Tarka opted for fresh-to-order fast casual over the more "Chipotle-style" of high-quality batches assembled to order. "Our goal has always been to bring Indian food to the mainstream and really grow the awareness of it," Saini says. "There's no reason that if you want take-out you shouldn't consider Indian food right next to Italian or Tex-Mex or burgers or pizza. For a long time it was known as a niche cuisine, something you'll get every once in a while – maybe it's a little intimidating, maybe it's too spicy, whatever misconceptions there are – so our whole goal is to make it approachable. We didn't want to, I don't want say 'dumb down,' but reduce the menu so much that it was just 10 items. We didn't think Indian food could be done the justice it deserves [that way], so we decided to go with the fresh-to-order version."

Saini says that for Tarka, "chicken tikka masala is probably 35% of all items ordered, and the curry section is probably 65%" and it's all customized after the order is placed: Pick your sauce, your protein, and your spice level. "We're making everything fresh in every location – we butcher all our own meat, we cut all our own vegetables, nothing is frozen, everything is fresh, sauces are being made fresh – and that is not sustainable as you grow to the scale that we are at."

To grow their business, Tarka searched for a partner company to outsource production of mother sauces before settling on the local ATX Specialty Foods. "Just like I did with my chef, learning how he did it, they came to our restaurants to see how we made it and then just scaled that up. So for the first time, we finally found a partner that was able to deliver on the flavor profiles that our guests had become accustomed to." Despite anxieties around customer reactions, the feedback has been overwhelmingly positive and they still do most prep in-house. Working with ATX Foods (one product is a red base, which is converted to tikka masala at each store) is a precursor for their next steps because consistency is important. "For example, I love Jack Allen's. They have a 12-spice chicken pasta that I adore and it's always the same every time. I hate going to a restaurant when I am craving something that I went for and it doesn't taste like it should. When something is made fresh to order like that, you can have some amount of inconsistency ([like] somebody reducing the mother sauce too much), so even if the flavor profiles were slightly different now – which they're not – that would've more than made up for the fact that it's going to taste exactly the same every single time." 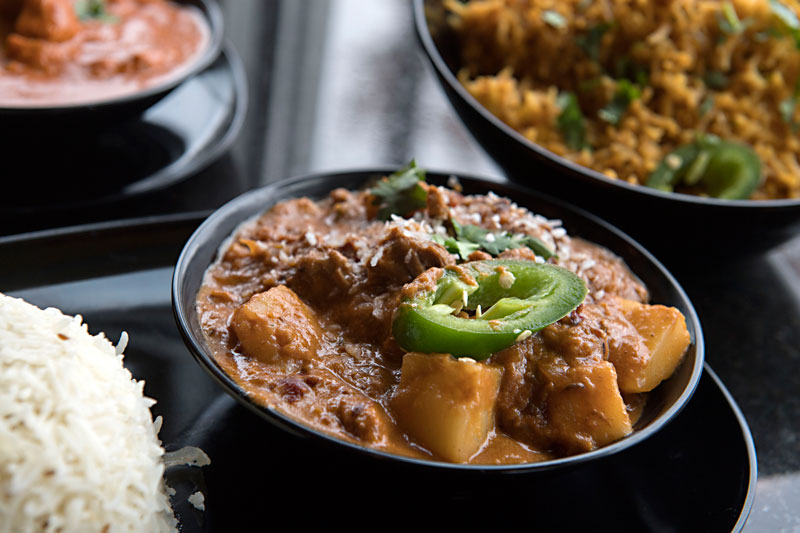 Tarka's near-future goals also include selling finishing sauces at a retail level (like fan-favorite mint-tamarind-yogurt chutney) and creating smaller footprint restaurants. Saini says, "We don't think takeout and delivery will ever go back to a pre-pandemic stage. What do they say about the power of habit? It takes six weeks to form a habit? Well, we're nine months into this [pandemic] now and I think permanently the landscape has shifted for restaurants. You have to adapt to that."

“Turning [chef Maqbool Ahmed’s] art into science, essentially, is where a lot of our recipes come from.” – Tinku Saini, CEO of Tarka Indian Kitchen

The Dallas/Fort Worth area is the next frontier, and then regional and national expansion, after they find a "smart capital partner" to take them to the 100- or 200-unit range. "We think in Texas alone you could have 30 Tarkas, but beyond that, absolutely we don't want to just be Texas-based. Again, our [biggest] goal is to expose as many as humanly possible to the amazingness of Indian food."

Business-minded Saini stays true to that shared passion. "When I was running the floor at Clay Pit, I remember there was a lady sitting by the window, and she looked sad. I asked her if everything was okay and she said, 'I just can't believe I waited this long in my life to try Indian food.' Honestly it still makes me emotional because that's ultimately what it's all about. When you fulfill a basic need with fresh healthy ingredients and beautiful flavor profiles, there's such joy that comes from that. Indian food is able to do that – surprise and delight – because it is a little unique, not necessarily what people are used to. So yes the money, the growth, the legacy, all that is wonderful – but in the end the joy has to come from that passion, that human level of connection, and having people fall in love with the cuisine. And then, all those other things will fall into place."

[Editor's note: We mistakenly identified the location of the original store at "Brody and Menchaca." It has been corrected as "Brodie and 290." We also corrected the spelling of "Singh."]