For One Austinite When the Pandemic Closed the Border, Uzbekistan Rolled Out the Welcome Mat 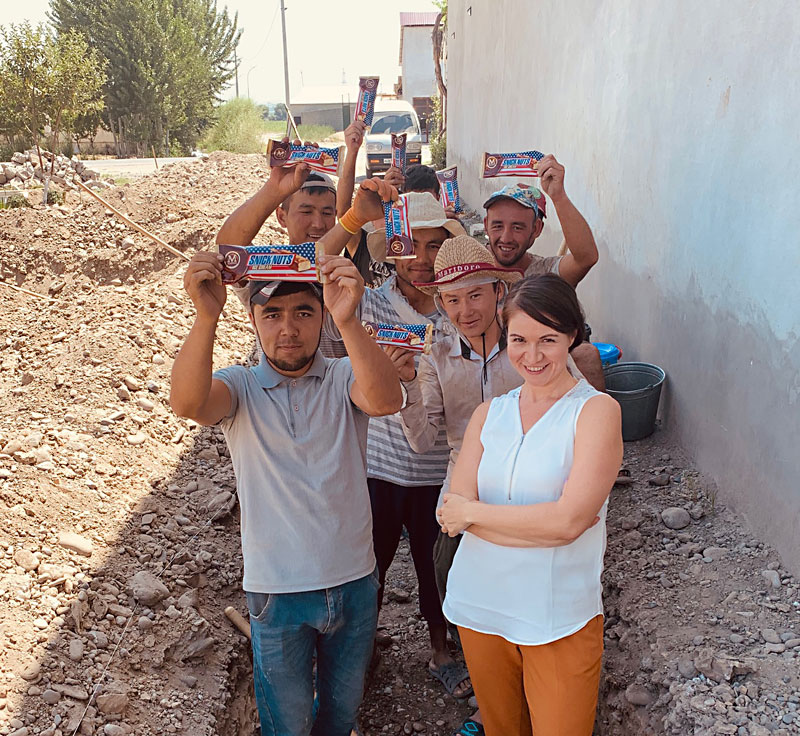 Jennifer Whiddon with construction workers in Andijan, Uzbekistan. She bought 190 ice creams for employees of her friend's shoe factory in celebration of the Fourth of July, which she spent in Uzbekistan when COVID-19 restrictions delayed her return home to the U.S. for months. (Photo by Erkin Jon)

It was supposed to be a two-month visit.

A few months earlier, Whiddon had visited the country for the first time. She had longtime friends from the region and had always wanted to see it in person. She loved her initial experience so much that she decided to return for a longer stay in order to take language classes in Russian and Uzbek. She'd intended to stay in the country for two months to participate in a language immersion program in Andijan, an ancient city on the border of Kyrgyzstan, about a five-hour drive away from the capital.

When Whiddon arrived in March, she'd heard of the coronavirus, but like most of us, had no idea how serious it would be. Whiddon's program was scheduled to start in mid-March and her plan was to spend a week or two getting settled and reconnecting with old contacts.

The first few days were a blur of excitement. Trips to the market to buy delicious fresh fruit, ice cream with old friends, exploring her new neighborhood. Then, about a week into her stay, Whiddon was grocery shopping with a friend when they received an alarming text. "As of tomorrow, the borders will be closed." Just like that, the lockdown had begun.

The Uzbek government moved so swiftly that there was virtually no time for Whiddon to get out of the country. She was five hours away from the airport and didn't have a ticket anyway. Meanwhile, the government was quickly shutting down the highways in an effort to prevent spread. Residents were instructed to stay at home and sit tight.

At first, Whiddon wasn't too worried about the sudden stay-at-home orders. "I'm always Miss Positive and Hopeful," explains Whiddon. "To be honest, I was not believing it was going to be a big deal. [I thought] well, they're going to close the borders for safety reasons and by April, or by May 1, when my ticket is out, I'll be fine."

For once, Whiddon's optimism didn't pan out. As months passed, the pandemic continued to spread around the world and Whiddon found herself stranded indefinitely, with no flights in or out of the country.

The first few months of the lockdown were particularly challenging, she recalls. She didn't speak the language and her classes had been canceled, so she was isolated without much to do.

For the most part, she stayed at home, read books, learned Russian, worked on writing projects, and spent time with the few friends she knew in Andijan. She had one local friend who continued to work, managing a local factory, and she would visit him on the job for his company (and the Wi-Fi connection). She also made friends with the owner of her local grocery store. With the aid of Google translation, she'd share stories about her life back home over a bowl of plov, a traditional Uzbek dish of rice, meat, and vegetables.

Was it hard to stay calm during such an uncertain time? "There were times where I would get anxious and a little sad," admits Whiddon, but she did her best to "hone in and just live today. Tomorrow will bring tomorrow."

Throughout her experience, Whiddon says she relied on prayer to sustain herself. Though her Christian faith made her unique in the Muslim country, she found common ground with her Uzbeki friends through their shared spirituality. "My friends would take breaks to pray to Allah, and I would take breaks to pray to my God. Although I prayed differently, everyone was very happy to learn about my religion and never made me feel wrong for my beliefs."

As the spring turned into summer, Whiddon's two-month visit stretched out with no end in sight. Her original return home date came and went. Fortunately, by June, some restrictions began to lift. Although she couldn't fly home, travel within the country was permitted, business and activities began to slowly resume, and small gatherings were allowed. Through friends, Whiddon was connected to more local people in Andijan, and her network grew significantly.

For the remainder of her time, Whiddon relied on these warm and generous Uzbeki neighbors who took her in, sharing meals, and touring her around the region. When she fell sick with what she believes was COVID-19, her local friends made sure she had the care she needed to get better. On July 4, they celebrated American Independence Day together.

Then, on Aug. 26, she got word from a friend that a flight out of the capital would be leaving for the United States on Aug. 29. The flight was being chartered to New York City by the Uzbek government in order to pick up stranded Uzbeki nationals. She was able to secure a ticket and then had just a breakneck 72 hours to pack and say goodbye.

The trip home has inspired mixed emotions for Whiddon. During her time in Uzbekistan, Whiddon chose to limit her international news intake. Being stranded was stressful enough and she didn't want to add to her anxiety. However, that meant that she largely missed the coverage of this summer's racial justice uprising, as well as our nation's continuing struggle to contain the coronavirus.

When she returned home, just a few months prior to our presidential election, she immediately felt a deep, pervasive tension and was saddened by what she saw.

"It just didn't feel like the United States of America," reflects Whiddon. "It felt like 51 states. Separated. And it was hard. It was hard to hear all the stories, because I love my country and to see people at such odds, to see people fighting, and being blinded by parties, instead of humanity and spirituality and love of a nation, it's hard to witness."

Now back home in Texas, Whiddon remains grateful for all her experience gave her. She plans to return to Uzbekistan to help connect businesses there with opportunities in the United States. She hopes people will hear her story and be inspired by the generosity of the people she met, who took in a stranger and made sure that she was cared for. She encourages us all to be a little more kind and brave. "Do not fear," says Whiddon, "and if you do: Fight it, beat it into submission, because over that boundary of fear ... you see that there's nothing but beauty." 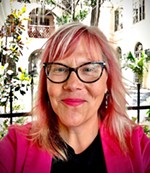 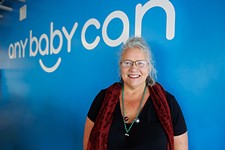