Faguette Bakery Serves the Qmmunity, One Sweet Treat at a Time 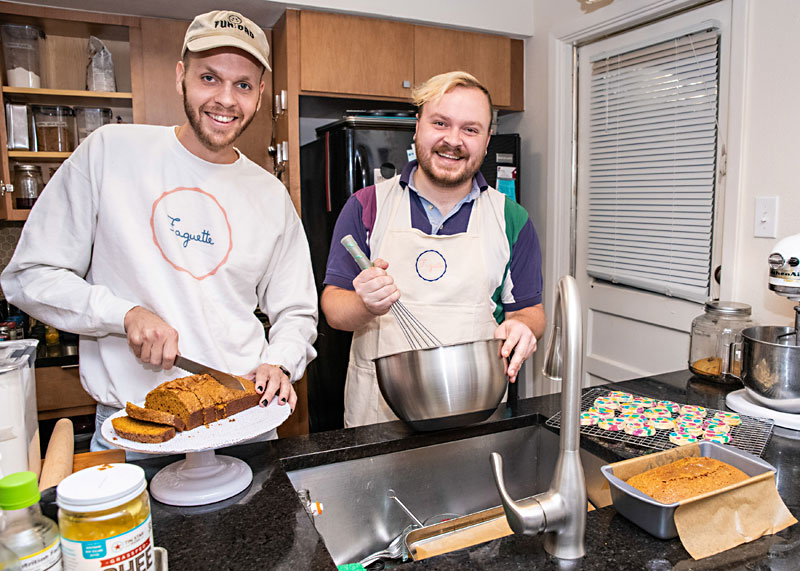 The word can mean a bundle of sticks, or be hurled as a derogatory slur, or be merrily shouted by a group of drunk queerios at each other when they're getting lit at Cheer Ups and everyone's ready for another round. For Brooks Naylor and Parker Breaux, there are three reasons they decided to play with that word for their online bakery, Faguette Bakery, where they donate the funds generated by monthly bake sales to local Austin LGBTQIA nonprofits.

"One, because it's funny," Naylor says.

Breaux follows up with reason two: "Because last year we were at Costco and I put a baguette on Brooks' head and said, 'Look, it's a baguette on a faguette.'"

But the third reason gets to the heart of Faguette Bakery: to provide care for the Austin queer community by combining Naylor's love for baking and Breaux's communications savvy. "It kind of gives you an idea of who we are – proud to be gay as hell – but the bakery's name is just for us. It's just for queers," Naylor says.

Their Instagram – @faguettebakery, which is worth checking out for Breaux's fun captions and their bio: "baking sweets and taking money from straight people" – posts charming pictures of all the goodies available for order. The recipes are culled from multiple sources; Naylor says some are self-created, others pulled from cookbooks, and the rest are Frankenstein's monsters made from multiple recipes pieced together. From them, Naylor creates a three-treat menu for the month that he practices until perfect. The two's personal favorites from previous menus include the Chewy Chocolate Chip cookies on September's menu and the Kentucky Derby Bars on August's menu. "I ate so many of [the bars], in fact," Breaux recounts, "that we were unable to complete our last order, and I had to run to the store to buy an extra stick of butter at the last second, much to Brooks' dismay."

As demand has increased, they've had to narrow their order window; there's also the stress from taking on this labor of love on top of their full-time jobs. "We had to make a delivery zone as well, because people from other towns began submitting orders," Breaux says. "For the first bake sale, I was driving all the way up to Leander and Cedar Park to deliver treats."

But there was delight in how rapid and plenty the orders were coming in, especially when it came to being able to give the nonprofits their donations. Naylor says it was a huge reward to have organizations like allgo and Out Youth "respond so quickly and so positively after receiving a large amount of money from a bakery called 'Faguette.'"

After their early success, the pair is considering scaling up the operation: maybe renting out a commercial kitchen space at least once a month to avoid a tricky home oven, or offering custom or event orders. Naylor says their goals are basically "building out some sort of system to take [all] that on, while still keeping the charitable mindset to the local queer community," with Breaux tacking on a wistful plan to learn to bake "at some point."

Faguette Bakery's name is important because it, like the word it comes from, is for queer people only. "I think people should know that anytime they place an order with us, they are giving to the Austin queer community," Naylor says. "If you're queer, you're giving back to your community. If you're straight, we are happily taking your money and giving it to people more in need of your funds."

Chaz Bono Is All About That Cult Life in Reboot Camp
Come and join us!