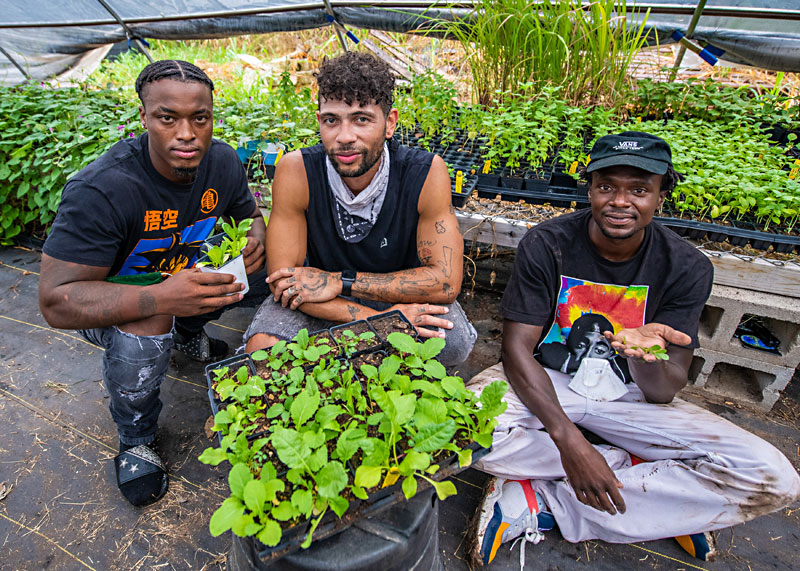 On a recent morning on East Austin farmland, a group of volunteers is bundling plants for pickup and Larry Franklin is demonstrating how he fortifies compost to make a potting soil blend he's tweaked through the years. "The soil is the foundation of a good vegetable," says Franklin, the proprietor of a new startup called Black Lives Veggies. "But we've made many mistakes throughout the process; We didn't wake up good."

When the pandemic hit, many sought solace and security in the natural world. Nurseries and garden centers saw an influx of sales as home gardeners bought up seeds, supplies, and starter plants for their modern-day "victory gardens."

"There's more people trying to grow a little food at home because they're scared about what's going on or they have more time," says Randy Jewart, who owns Resolution Gardens, a landscaping company focused on food gardens, with his wife Monica Asencio. They specialize in building raised bed gardens, which he says are necessary in areas of Austin where an impenetrable layer of limestone lurks below a very thin layer of topsoil. But the cost of such beds is prohibitive for most people, so he'd been wanting to provide a more accessible way for people to start home gardens: by offering full-grown vegetables for sale in large black nursery containers that can thrive on even a small apartment balcony.

As the Black Lives Matter movement began sweeping the country, Jewart and Asencio decided to support a Black-owned business by offering business counsel and investing capital in one. "If we, as a community, value Black and minority-owned businesses, before we can support them as consumers, someone has to invest in these individuals to help them start the business," says Jewart. "Black Lives Veggies is a deceptively simple solution to a complex phenomenon that we've dedicated our lives to: environmental stewardship, healthy local food production, social justice, and community activism."

This summer Franklin and Johnny Jefferson launched Black Lives Veggies by planting seeds using donated pots and compost made from Resolution Gardens clients' recycled yard waste. Jefferson, a former Baylor football star, was a Resolution Gardens new hire on the landscaping team, but Jewart has known Franklin since he started Resolution Gardens in 2009, because he was part of a Goodwill job-training program for at-risk youth.

"I used to be a drug dealer," says Franklin. "I went to the penitentiary and came home and had a monitor on my ankle. Part of the stipulation of getting it off was to get employment. I thought, 'Who the hell is going to hire me?' I thought of myself as one of the worst of the worst. Randy was like my mentor, taking me to every meeting and teaching me everything."

Franklin went on to manage veggie garden maintenance at 10 local senior centers. "That summer I met 80 kids who were all struggling with education, financial, mental health, and criminal record issues and trying to learn about working life," remembers Jewart. "Larry is one of the few I've kept in touch with and he's worked with Resolution Gardens off and on for 12 years. Our relationship is very deep through working together and staying connected when he was incarcerated. He saved my life in December when I was crushed under steel beams that collapsed on me and he rallied my neighbors to come lift the weight so I could get out. We both feel like we're even now."

Franklin had always aspired to start his own business, but when he did establish his own lawn company called Urban Gardens, he was running into problems drumming up business. "At that time I really began to see America in a different light," says Franklin. "It's easy for someone to say Black Lives Matter, but what I began to see is the real challenge is not saying it but the encounter. Are you willing to encounter this skin color in an unbiased way? I realized we're not there yet in America. And so with that being said, my business was not self-sustainable. So I had to come back and work for Randy to manage it, which is what I did. We sat, we talked. He said, 'You've been a gardener for all of your life – let's do something.' And I said, 'Let's do it.'"

Zach Herigodt from YardFarm, another local garden installation company, donated East Austin farmland, greenhouse space, and pots to BLV's operation; Joe and Kasey Diffie of neighboring Joe's Organics, a food composting company, also joined forces. For $25, the company can purchase 9,000 seeds. And with retail values ranging from $1 for starts and $5-10 for full-grown plants, the company expects revenues of over $30,000. "The model is immaculate," says Franklin. "Everything is reused and recycled. It's not an individual effort. It has to have community wrapped around it. Nothing is bought except for seeds."

Just like they're demonstrating the ability to produce veggies with limited supplies and cost and space, BLV hopes to use the same model for pigs and pastured chickens raised at churches and schools. They also want this open-source business model to be replicated in every community in the country.

"This experiment needs to be able to create wealth in Black communities in order to be a success," says Jonathan Horstmann, who joined the team to help with web administration, digital marketing, and design. "We want to create ways to connect potential micro-investors with potential business owners, and give a business model that can be followed step by step to create change in communities. This means we are going to try something, see if it works, and document it."

“We hope others in Austin and around the country recognize that white people with a little expendable income can support Black-owned food production very simply.” – Randy Jewart, owner of Resolution Gardens

This winter Jewart hopes to identify three or four other cities to share training resources and assets with, likely starting with his hometown of Pittsburgh – and he's already in talks with someone else interested in starting a BLV model in Durango, Colo. "We hope others in Austin and around the country recognize that white people with a little expendable income can support Black-owned food production very simply," he says. "Anyone who knows about food deserts and the health crises in low-income communities, as well as the flip-side of the elitism of the sustainable/organic movement, can see the power of these guys making the foundation of health out of almost thin air," says Jewart.

While business has been booming since they started in July, the road hasn't been without obstacles. Franklin still struggles with alcohol addiction, and credits the patience and support of his team with his continued success; they nurture one another like the very seeds they cultivate. "The seed can teach you how to live – it really can!" says Franklin. "You have to eliminate your own way of thinking, your values, your principles, and adapt. That's what nurturing is about. You meet it where it's at and become a tool for the development of whatever you're dealing with. And that's what we lack in our society. We don't attempt to meet people where they're at. We don't allow ourselves to become vulnerable. We don't swallow our pride and become humble. Instead we hoard, we control, we demand, we manipulate. And the end results are a crushed society – a society that's afraid of one another."

Jewart says he's learning to step back, listen, and let others take the reins, a challenge for this self-proclaimed "dictator" of a Virgo. "You get a room full of people and the white dude is going to be the one to mouth off and act like he knows everything," he says. "And we as a culture have to unlearn that. I told them from the start, I'm going to mess up and they need to call me out and I'm going to do my best to listen. So these guys have been great teachers, trying to coach me into how I can help them in the best way."

Together, the team is also figuring out how to maintain the delicate balance between increasing demand and production. After exclusively taking orders online, they started hosting plant pop-ups at Dia's Market. And since demand is steady, they're filling pots as soon as they get more. 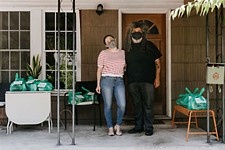