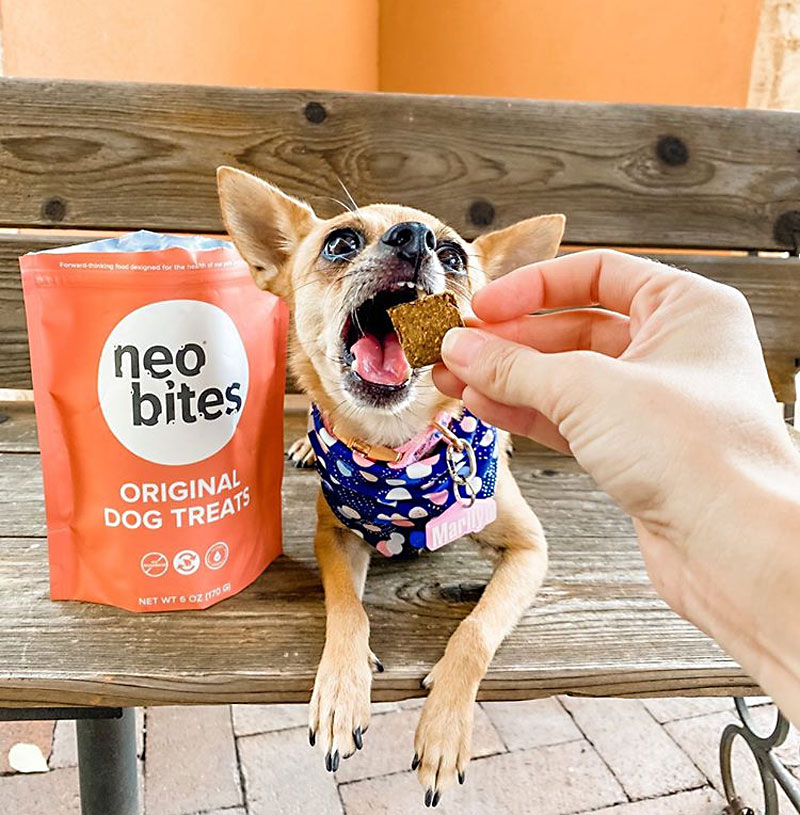 What if your dog's food was healthy, delicious, and reduced harm to the planet? That's the mission of Neo Bites, a new local pet food company that utilizes the benefits of crickets as a sustainable and nutritious primary protein source for dogs.

"Imagine eating a highly processed meal replacement bar for every meal – you wouldn't be the healthiest version of yourself. That's kibble," said Wesley Cooper, founder of Neo Bites and a native Austinite. He created the hypoallergenic gut-friendly food and treats after being laid off in New York City due to COVID-19 cutbacks and returning to his hometown. Working for CPG industry giants in NYC like Vita CoCo coconut water, RUNA, and Uptown Energy afforded Cooper substantial marketing expertise and fueled his self-described passion for sustainability. "I was paying a lot of attention to what our industry was doing to the environment – including single-use plastics," said Cooper. "As I learned more about the agricultural industry, I stumbled onto crickets. I had already known about some of the cricket players like Chapul [from Shark Tank], but once I found out 'why crickets' it became an itch I had to scratch."

Armed with extensive background knowledge, Cooper began research on healthy sustainable packaged foods for humans and purchased some cricket powder online. After "playing around with recipes in [his] spare time," he developed a tasty nutritious cookie and launched a crowdfunding campaign in February of this year. "Five days into that Kickstarter, I was going to meet an adviser for coffee and saw an ad on the subway for fresh dog food with human-grade meats and I remember thinking, 'That's great, but pretty unsustainable.' I brought it up with my adviser, who thought it was really interesting. I started researching the pet food industry and realized it was very similar to the CPG world for humans in terms of trends and marketing." But the financial requirements are far less, so after the lay-off, Cooper shifted gears and sought the guidance of a board-certified veterinary nutritionist to develop a dog treat based around crickets that were not only safe, but met nutritional standards while reducing environmental impact.

His newly founded company, Neo Bites, quickly worked out a good recipe and began crowd-testing with friends' and co-workers' dogs. "With humans, you can get feedback on everything they did or didn't like – flavor and texture. With dogs, it's yes or no."

Neo Bites is made in small batches in a commercial kitchen, using whole-food, human-grade ingredients including the primary source of animal protein, crickets (sourced from a family farm in Canada). Considered a "superfood" by many, crickets contain all 10 essential amino acids, as many omega-3s as salmon and more vitamin B12, more iron than spinach, more calcium than a glass of milk, and a prebiotic, chitin, found in the cricket's exoskeleton. In terms of sustainability, crickets use a fraction of water, land, and feed compared to traditional protein sources, such as cows, and emit far fewer greenhouse gases. "For edible weight, crickets are 80% and cows are 40%. And then there's emissions: Methane emissions have really one of the biggest impacts. They produce more than a third of the methane emissions in the United States, which is amazing in a bad way," Cooper explained. "Methane is 28 times more impactful at warming the planet than carbon dioxide. So it's more about reducing meat consumption, not eradicating it. We're trying to raise awareness of the impact of beef and push people to a more sustainable alternative that dogs still love."

"Dogs love the taste of both crickets and beef, so choose the one that's more sustainable and a superfood," he added. "I guess saying I'm waging a war with beef is a little harsh. We use eggs in the recipe, which basically has the same impact as chicken, so it's more about becoming aware of the agricultural environmental impacts and reducing consumption. Dogs don't need beef for every single meal – make it a treat."

Neo Bites is all about pet parent education, so they just launched a new 1-oz. bag of treats for $5 in hopes curious customers and their dogs will give the cricket treats a chance. They're currently working toward an air-dried and more calorically ­dense version – it's currently fresh and refrigerated – which will be available soon. Products are available for nationwide shipping at their online shop (www.eatneobites.com, subscriptions available), and locally at: Great Outdogs (1210 Barton Springs Rd.) and Prime Pet (2400 E. Cesar Chavez).