The Future of Mother’s Cafe Is Pending

The vegetarian institution could permanently close in October 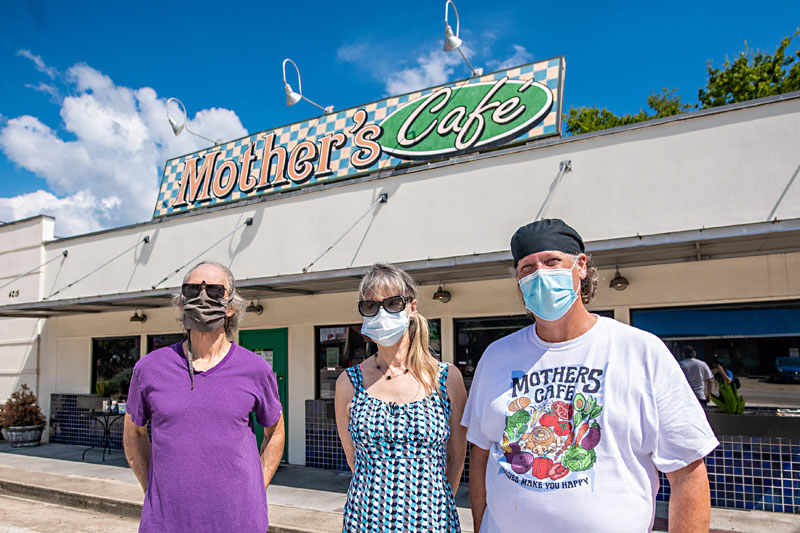 With no real answers about their future, countless restaurants are struggling to make ends meet during the ongoing global pandemic. And like so many others, the future of Hyde Park vegetarian institution Mother's Cafe & Garden is now uncertain, after four decades in business. In conversations by phone and email, co-owner John Silberberg told the Chronicle that although the Mother's Cafe situation is constantly changing, their current reality signals that the end of Mother's Cafe – at least in its current iteration – is likely near.

"Our understanding of circumstances changes every few days," Silberberg said. Currently, Mother's Cafe has a lease scheduled to end on September 30, but in talks, their landlord offered a month-to-month arrangement, and Mother's co-owners have agreed to that for October only so far. "Anything past 10/31 seems unsure, given revenue, which does not fully cover expenses," he said. Any "unpaid rent balance" is a pending matter, and Silber­berg has reiterated that their landlord has been patient and encouraging, "and they have spoken in terms of hoping we can continue."

Mother's Cafe, also owned by Cameron Alexander and Anne Daniels, has been serving vegetarian and vegan comfort food since 1980 and became a neighborhood anchor – not an easy feat for any restaurant but certainly more complex as a vegetarian restaurant. When they opened, their competition was really only Bouldin Creek and Mr. Natural. Over the years, as the Austin food scene exploded, as financial crises leveled out, as the new restaurant oversaturation settled a bit, as vegetarianism and veganism grew more mainstream, Mother's rode the waves and finally began to see their sales rising again in early 2020, when "this thing happened." He said, "Restaurants are very time-consuming and very demanding, because pretty much 14 hours a day something can go wrong. It doesn't matter how right you did it yesterday. It's just like a Broadway play: You gotta do it again today, because doing it right yesterday doesn't have anything to do with it."

First it was the original March shutdown estimate of six weeks and a soon-to-follow realization that the restaurant woes were far from over. As lawmakers suddenly began reopening Texas in June, COVID-19 cases spiked again, which walked back the progress and reinstated restrictions. Now it is September, and there are still life-altering questions going unanswered, and with no disease solutions in place, pandemic restrictions will continue. Mother's Cafe did receive a PPP loan, said Silberberg, but the 24-week grant is up mid-October, weeks after their lease was already slated to end. As they're carefully examining all options, opening for dine-in is not one of them. "I really think that COVID will not begin to be under control until late 2021 at best, and we are not willing to be a vector of spread. We'll hang on as long as we can, but don't know how long that will be."

He said, "It's our Blair Witch Project: You somehow just can't walk out of the woods – you're never getting anywhere and there's no out until you finally wake up and say, 'This is not presenting us any route forward, at all, at least for a year, and that would be if we're really lucky.' If I was 30 years old, I might be willing to mask up and work inside of the dining restaurant, but I'm in the big risk group now. And I'm unwilling to take responsibility for inviting staff to be in that situation as well. We're not going to ask our staff to work in that environment. This is taking away my livelihood; it's taking away my business. But I'm just one of seven-and-a-half billion people that this has [affected]."

So, near Halloween will likely mark the end of their era. "With outdoor dining trending down and PPP support gone, [that] will firmly push Mother's Cafe against the wall," Silberberg explained. "For us, up against the wall and looking for options, there just happens to be a door nearby – an expired lease. The most likely outcome seems now that we will be pushed through that door, pushed out by COVID. At least, that's how it looks as of today.

Snapshots of Mother's Cafe in 1981, just after the first garden was built (Courtesy of Cameron Alexander)
“This is a forest fire. Three or four years after a forest fire, there are bugs and birds and raccoons and trees and grasses, but they’re not the same ones that were there before the fire. Those are all gone. And others move in. There will be restaurants and bars in Austin in 2024, 2025 – but they won’t be the same ones.” – John Silberberg

"It's shocking and kind of stupefying. When you get older and you've worked in your own restaurant for a long time, and it's all you've done, and you have a world history event, it's a shock. Particularly the fact that it's been a multimonth evolution of what's really happened. It didn't have to be this way." He continued, "This is a forest fire. Three or four years after a forest fire, there are bugs and birds and raccoons and trees and grasses, but they're not the same ones that were there before the fire. Those are all gone. And others move in – and there will be restaurants and bars in Austin in 2024, 2025 – but they won't be the same ones."

He spoke about the restaurant's own major fire in 2007 and how that reopening, that turning of the deadbolt to allow their customers to return after they'd only cleaned up a little, was a defining moment. Silberberg said he knew then, when people started filing in the door, that even though the fire had taken so much, people came back "because they like what we do. We turned into Sally Field winning her second Oscar. That really had a big impact – so validated and so appreciated."

And they're still feeling that love. Mother's is focusing their remaining time left on making good food and on the people – those who have ordered signature dishes like Bueno burgers and artichoke enchiladas, and the people who work at the restaurant. "I would [like to] express gratitude and appreciation for a lifetime of support. I'm glad they chose Mother's Cafe. [Like] the people who came in with their grandkids, who came in 35 years ago on their first date. And their great understanding and patience, and the amazing generosity when it comes to tip lines to fill out, enabling our staff to work shorter shifts and still preserve income."

He added, "The human contact from operating a restaurant has been an immense part of my life. I've loved interacting with our customers and it's been a treat to work alongside the 40-year flow of twentysomethings who work in restaurants – ever since I was a twentysomething! I'll grieve the loss of that as much as I will the loss of my business and livelihood."

As for that door leading to a still cloaked and looming outcome, Silberberg looks toward it with an open mind. "What happens when we go through that door? Maybe we'll be Dorothy, opening a door to beautiful and fantastical Oz. Or maybe we'll be Wile E. Coyote, stepping through the door and plunging down, doomed, into a distant poof of dust." Maybe that door will lead to some sort of middle ground, somewhere in between, but, "Uncertainty has become the new certainty. We will continue to bottle the cashew tamari dressing for retail sale and may develop a way to sell online. And we could develop other retail products, perhaps, new tricks for a 40-year-old dog. And we'll give things a good look-around, once we step through that door."

Mother’s Cafe is currently open for lunch and dinner, for takeout and delivery only. Their bottled cashew tamari dressing is available at Mother’s Cafe, Whole Foods (including some stores outside of Austin), Wheatsville Co-op, Fresh Plus, Royal Blue Grocery, and Rabbit Food Grocery. www.motherscafeaustin.com.